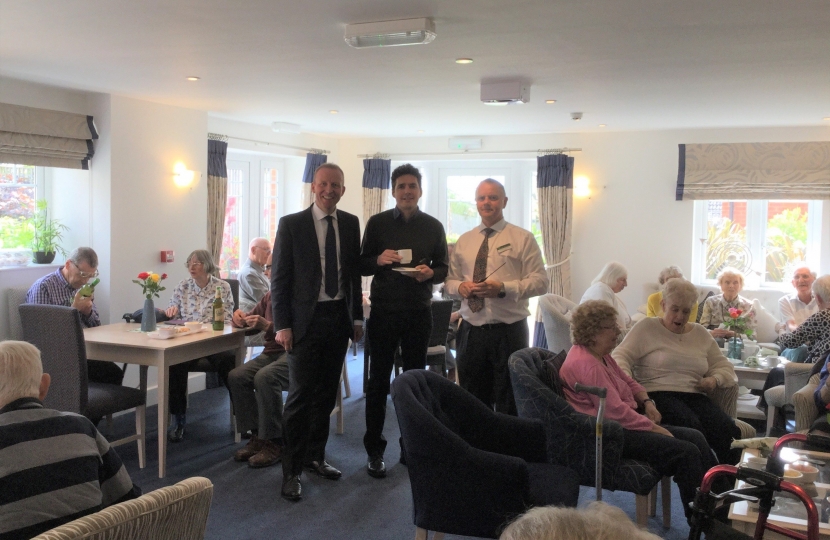 Bexhill and Battle MP, Huw Merriman, dropped in on residents at Hillborough House, Bexhill, for their fundraising tea in aid of St Michael’s hospice. The MP was visiting the retirement living flats with McCarthy and Stone’s, Chief Executive, John Tonkiss. During a recent Prime Minister’s Question, the local MP criticised the management practices and fees at some retirement properties in East Sussex and called on the Prime Minister to lead reform and help vulnerable pensioners. McCarthy and Stone contacted the MP in order to offer a positive example of managed retirement living in Bexhill.

CEO John Tonkiss and Tony Cannon, the House Manager at Hillborough House welcomed Huw to the development and showed him around the entire site. John explained to Huw that McCarthy and Stone’s new model for retirement living means that they retain full ongoing management responsibility for the property and are fully accountable to their residents.

One resident, a retired local headteacher, was kind enough to welcome Huw into her flat and explained how living at Hillborough House suited her needs.  She told Huw that she was delighted with her spacious flat and enjoys socialising with the other residents whilst maintaining her full independence.

During the fundraising tea, residents chatted to Huw and explained that this was one of many social events that take place on a regular basis.  They told Huw that the social side of retirement living was one of its greatest benefits.

Huw said “Having previously taken up the concerns of some of my retired residents who do not feel that they are being well-treated by the landlords, managing agents and freeholders of their retirement homes, it was refreshing to visit a retirement site where the advantages and benefits of retirement living are exactly as they should be. I am pleased that the new incarnation of McCarthy & Stone is setting a good example for the rest of the retirement living sector.  I hope that the government’s proposed changes to leasehold law which I am supporting will empower residents to challenge and change their property managers. We must ensure that all people living in retirement properties will experience the same sense of security and high standards as the residents of Hillborough House.”

John Tonkiss, Chief Executive of McCarthy & Stone said “We were pleased to welcome Mr Merriman MP to Hillborough House and our residents were delighted to meet him and show him around their new home.  Retirement communities like this make a profound difference to the well-being of older people.  In turn, this eases the many pressures on the NHS and social care system.  We have worked hard to ensure our new developments and services meet the very high standards our customers expect and deserve, and we look forward to working with Mr Merriman to help further improve standards across this important part of the housing market.”