Huw pays tribute to His Royal Highness the Duke of Edinburgh 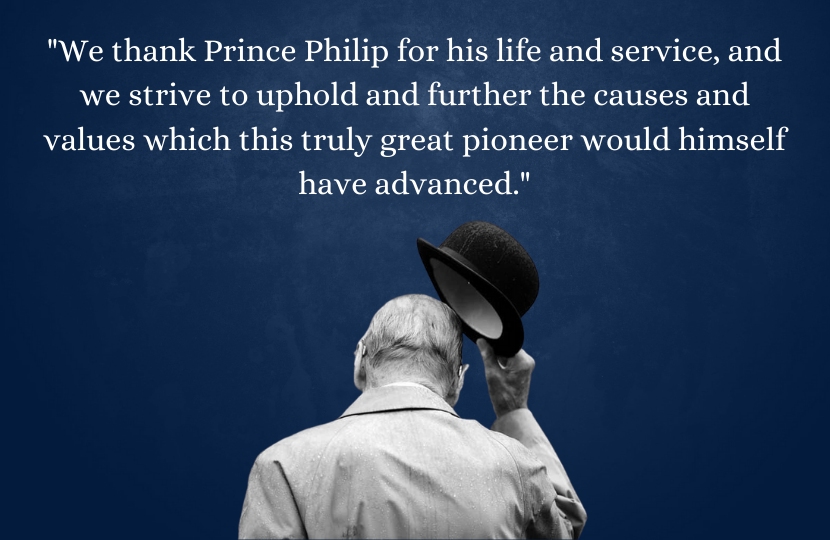 Local MP Huw Merriman paid tribute to the Duke of Edinburgh in the House of Commons on Monday.

Mr Deputy Speaker, when Prince Philip was asked at the age of 90 if he thought he had been successful in his role, he remarked “I couldn't care less, who cares what I think about it? I mean, it's ridiculous.”

Quite what Prince Philip would have made of 140 Members in this place, most of whom he had not met, singing his praises today is best left as a matter of conjecture. We do so, however, in our desire not just to honour a figure of great public service, but also to recognise the virtues, embodiment and achievements of the man himself - the consort, the leader, the pioneer and the war hero. A remarkable man who has forever left his mark on this great nation. We may never see his like again.

He was modest. On being lauded with the Duke of Edinburgh scheme, Prince Philip said, he could not take credit for the highly successful scheme, he said “I don't run it. I’ve said it's all fairly secondhand the whole business, I mean I eventually got landed with the responsibility or the credit for it.”

This, Mr Deputy Speaker, is in direct contrast with the modern art of taking the credit for everything, no matter the limited involvement, and the responsibility or blame for very little.

He was self-effacing. It was His Royal Highness the Duke of Wessex who said the best piece of advice his father gave to others was “talk about everything else, don't talk about yourself, nobody's interested in you”. Wise words Mr Deputy Speaker to those of us in this Chamber.

And he championed the causes which mattered to him, not just the causes which met the approval of the status quo or the social media brigade, but those which advanced change for those who needed it the most, even if that meant swimming against the public opinion tide of the day; from raising the plight of the environment and conservation in the 1950s, to the quest to reconcile evolution with Christianity in the 1980's.

The Prince was not interested in what was fashionable or acceptable at the time. His quest was to make this place a better one for future generations. His determination to give young people the best of opportunities must be the compass which guides us all at this particularly difficult time.

It is notable that Prince Philip reached the hearts and minds in a manner where us politicians often come up short. Prince Philip’s life was reflected by the respect given in his passing must give everyone more confidence in the powers of persuasion. His approach demonstrates that language which is direct, blunt and non-partisan, is actually also very welcome in this country. His advances demonstrate that people can be won around by reason if the argument is genuinely held, even for a cause which does not initially appeal.

This year, Mr Deputy Speaker, the Transport Select Committee has launched an inquiry as to how we can deliver electric vehicle capability by the 2030 deadline. Prince Philip, always ahead of the curve, was driving around London in an electric Bedford Lucas van 40 years ago. Over his years, he also enjoyed driving school coaches, tanks, double-decker buses, bikes, classic cars and his eco taxi. He was a supporter of the pioneers of transport. It is fitting that a man so fascinated in science and technology, whilst appreciating the simple things in life, will be carried to his final resting place in his modernised Land Rover Defender.

From the constituents of Bexhill and Battle and across this land, we send our condolences and thoughts to Her Majesty The Queen and all members of the Royal Family. We thank Prince Philip for his life and service, and we strive to uphold and further the causes and values which this truly great pioneer would himself have advanced.