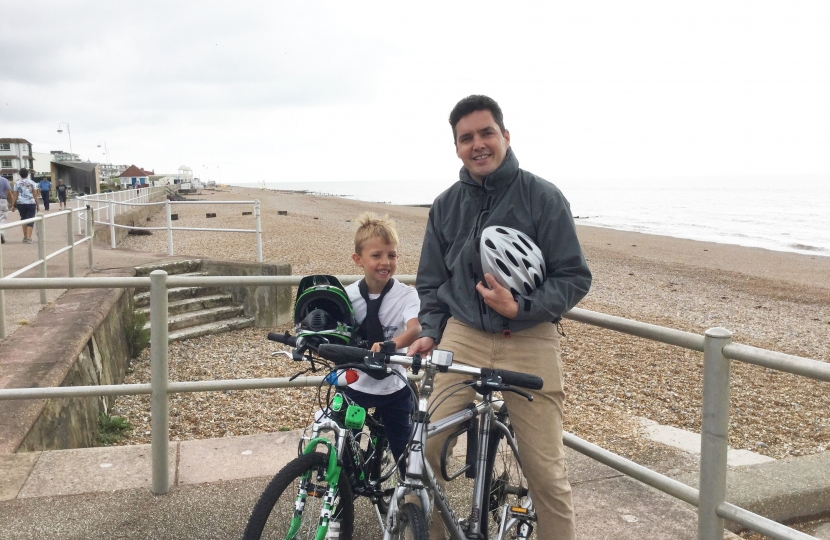 Bexhill MP, Huw Merriman, went for a cycle ride with 6 year old fundraiser Charlie Willis to hear more about his goal to raise money for a local organisation who help the homeless during his summer holidays.

Huw met Charlie and his mum Jo in Bexhill to hear more about Charlie’s fundraising.  Huw and Charlie enjoyed a cycle ride along the Bexhill promenade whilst Charlie told Huw that he is already halfway to meeting his target of cycling 25 miles during August.  Charlie also explained to Huw that he was very concerned when he heard that some people are homeless and wanted to do something to help them. Charlie’s mum got in touch with local voluntary organisation “Warming Up the Homeless” which supports people in Bexhill, Hastings and Eastbourne to find out what Charlie could do to raise money for them.

Charlie’s mum said “I'm so proud of Charlie for having so much compassion at such a young age and I don't want him to lose that, so as soon as he said he wanted to do something to help I sorted it out as quickly as I could. Charlie really wants to do something amazing but without others sponsoring him he wouldn't believe it was possible, so I am so grateful to every single person who has sponsored him. I hope that because Charlie has raised so much money doing this it will inspire him to go on and do more wonderful things in the future.”

Charlie added “I wanted to help homeless people because everyone should have food and a bed and a home. I am riding my bike because I can go a lot further on it so people will give me more money for charity. When I met him (Huw) it was the best day of my life because I got to meet an MP.”

Huw said “I was really pleased to meet Charlie and go for a cycle ride with him along Bexhill seafront. He cares very much about other people and it is fantastic that he wants to help others in this way.  He is already doing a great job at completing his 25 miles and has already met his fund-raising target. I am delighted to be one of his supporters and I hope that others will do the same.”

For more information about Warming Up the Homeless visit https://www.warmingupthehomeless.org.uk/