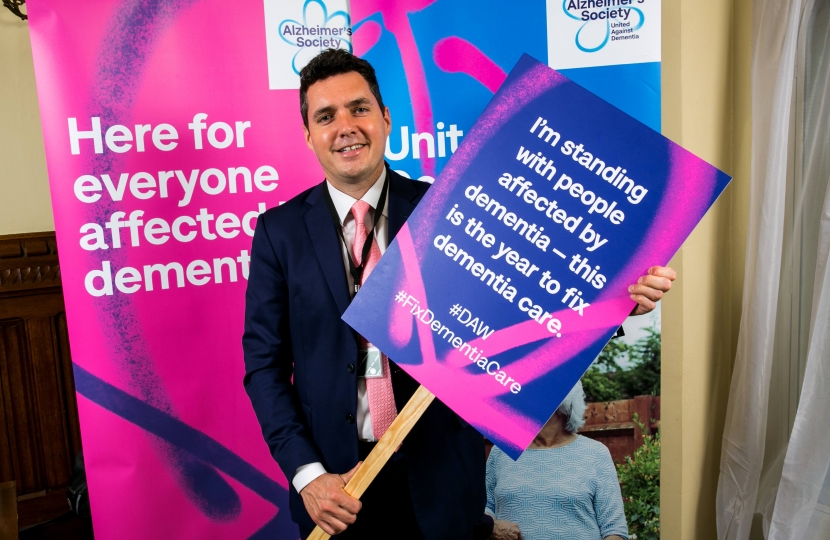 During this year’s Dementia Action Week, the Alzheimer’s Society asked the general public to take small actions that can have a big impact on the lives of people with dementia. Huw, and other MPs, were invited to lend their support to Alzheimer’s Society’s work as they fix dementia care.

With no drugs to cure or slow down dementia, it tends to be social care, rather than the NHS that people with dementia rely on every day. In the UK, three fifths of people using homecare and 70% of people in care homes live with dementia. Dementia is among the most complex conditions that the social care system has to support, yet too many people with the condition are struggling to access good quality care at a fair price.

Alzheimer’s Society has been campaigning to fix dementia care to ensure that everyone with dementia receives good quality care when they need it. Their new report, Dementia – the true cost, highlights the far-reaching impact of the broken social care system on people with dementia.

The report, based on testimony and evidence from people affected by dementia, social care professionals and dementia lead nurses, also outlines urgent areas for Government to address in its upcoming Green Paper on social care reform.

Huw commented: ‘I am pleased to have united with people with dementia during Dementia Care Week and commit to campaigning to fix dementia care. One million people will have dementia by 2021 and it is vital that we are able to deliver high quality social care to everyone that needs it. Meeting with carers further demonstrated to me that we need to overhaul our social care system. The funding either needs to be centralised or we need to ask people to pay more from their estates to fund the cost of care. In East Sussex, our County Council is struggling to fund other services because the social care bill is dominating its budget. Those I spoke with agreed that we need to have a conversation about raising more revenue or taxation to pay for proper care.”

Sally Copley, Director of Policy and Campaigns at Alzheimer’s Society said: ‘It is fantastic to see MPs from across parliament uniting with us to champion the voices of people with dementia, and call for reform of our broken social care system.

“This Dementia Action Week, as we’re asking everyone across the UK to take actions big or small to help people with dementia, it’s brilliant to see positive action from people and we’re looking forward to working with Huw to respond to the public demand for change. Our Fix Dementia Care campaign has exposed the poor quality care that people with dementia are currently receiving, and this must end now.”