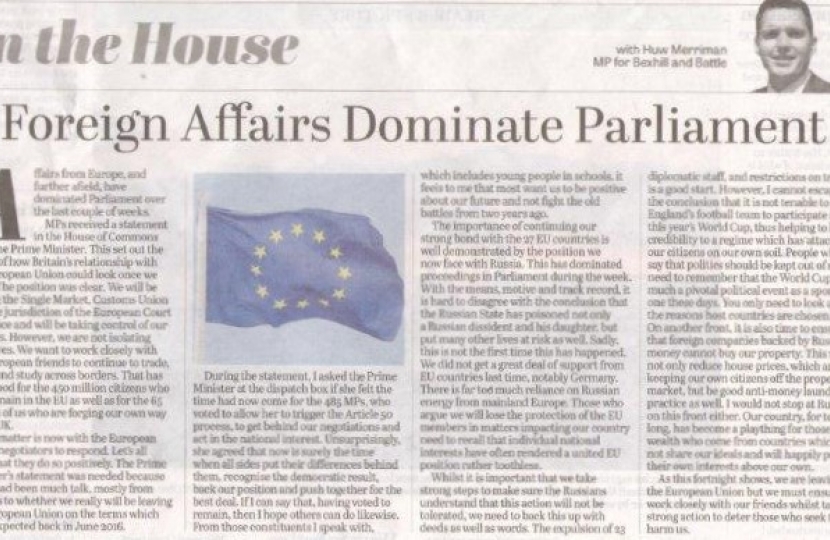 Affairs from Europe, and further afield, have dominated Parliament over the last couple of weeks.

MPs received a statement in the House of Commons from the Prime Minister. This set out the vision of how Britain's relationship with the European Union could look once we leave. The position was clear. We will be leaving the Single Market, Customs Union and the jurisdiction of the European Court of Justice and will be taking control of our borders. However, we are not isolating ourselves. We want to work closely with our European friends to continue to trade, travel and study across borders. That has to be good for the 450 million citizens who will remain in the EU as well as for the 65 million of us who are forging our own way in the UK.

The matter is now with the European Union negotiators to respond. Let's all hope that they do so positively. The Prime Minister's statement was needed because there had been much talk, mostly from MPs, as to whether we really will be leaving the European Union on the terms which were expected back in June 2016.

During the statement, I asked the Prime Minister at the dispatch box if she felt the time had now come for the 485 MPs, who voted to allow her to trigger the Article 50 process, to get behind our negotiations and act in the national interest. Unsurprisingly, she agreed that now is surely the time when all sides put their differences behind them, recognise the democratic result, back our position and push together for the best deal. If I can say that, having voted to remain, then I hope others can do likewise. From those constituents I speak with, which includes young people in schools, it feels to me that most want us to be positive about our future and not fight the old battles from two years ago.

The importance of continuing our strong bond with the 27 EU countries is well demonstrated by the position we now face with Russia. This has dominated proceedings in Parliament during the week. With the means, motive and track record, it is hard to disagree with the conclusion that the Russian State has poisoned not only a Russian dissident and his daughter, but put many other lives at risk as well. Sadly, this is not the first time this has happened. We did not get a great deal of support from EU countries last time, notably Germany. There is far too much reliance on Russian energy from mainland Europe. Those who argue we will lose the protection of the EU members in matters impacting our country need to recall that individual national interests have often rendered a united EU position rather toothless.

Whilst it is important that we take strong steps to make sure the Russians understand that this action will not be tolerated, we need to back this up with deeds as well as words. The expulsion of 23 diplomatic staff, and restrictions on trade, is a good start. However, I cannot escape the conclusion that it is not tenable to allow England's football team to participate in this year's World Cup, thus helping to lend credibility to a regime which has attacked our citizens on our own soil. People who say that politics should be kept out of sport need to remember that the World Cup is as much a pivotal political event as a sporting one these days. You only need to look at the reasons host countries are chosen. On another front, it is also time to ensure that foreign companies backed by Russian money cannot buy our property. This would not only reduce house prices, which are keeping our own citizens off the property market, but be good anti-money laundering practice as well. I would not stop at Russia on this front either. Our country, for too long, has become a plaything for those with wealth who come from countries which do not share our ideals and will happily put their own interests above our own.

As this fortnight shows, we are leaving the European Union but we must ensure we work closely with our friends whilst taking strong action to deter those who seek to harm us.