Flying the flag for England in Russia 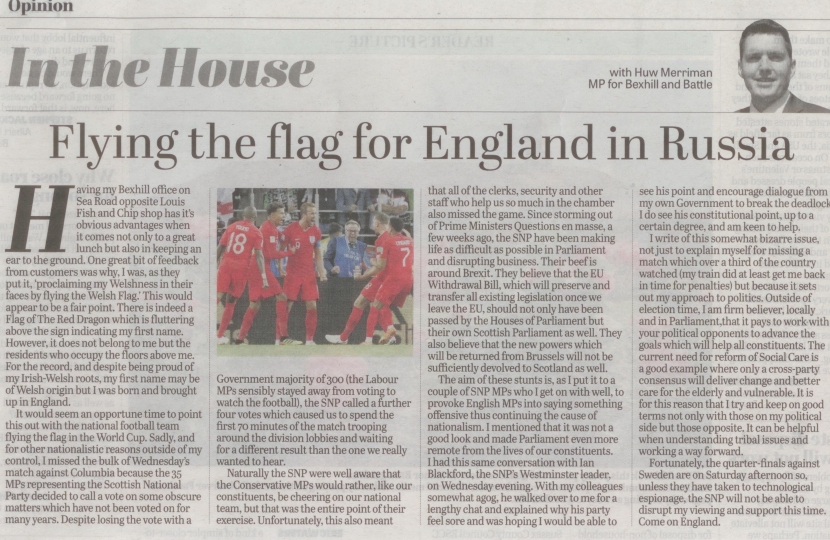 Having my Bexhill office on Sea Road opposite Louis Fish and Chip shop has it’s obvious advantages when it comes not only to a great lunch but also in keeping an ear to the ground. One great bit of feedback from customers was why, I was, as they put it, ‘proclaiming my Welshness in their faces by flying the Welsh Flag.’ This would appear to be a fair point. There is indeed a Flag of The Red Dragon which is fluttering above the sign indicating my first name. However, it does not belong to me but the residents who occupy the floors above me. For the record, and despite being proud of my Irish-Welsh roots, my first name may be of Welsh origin but I was born and brought up in England.

It would seem an opportune time to point this out with the national football team flying the flag in the World Cup. Sadly, and for other nationalistic reasons outside of my control, I missed the bulk of Wednesday’s match against Columbia because the 35 MPs representing the Scottish National Party decided to call a vote on some obscure matters which have not been voted on for many years. Despite losing the vote with a Government majority of 300 (the Labour MPs sensibly stayed away from voting to watch the football), the SNP called a further four votes which caused us to spend the first 70 minutes of the match trooping around the division lobbies and waiting for a different result than the one we really wanted to hear.

Naturally the SNP were well aware that the Conservative MPs would rather, like our constituents, be cheering on our national team, but that was the entire point of their exercise. Unfortunately, this also meant that all of the clerks, security and other staff who help us so much in the chamber also missed the game. Since storming out of Prime Ministers Questions en masse, a few weeks ago, the SNP have been making life as difficult as possible in Parliament and disrupting business. Their beef is around Brexit. They believe that the EU Withdrawal Bill, which will preserve and transfer all existing legislation once we leave the EU, should not only have been passed by the Houses of Parliament but their own Scottish Parliament as well. They also believe that the new powers which will be returned from Brussels will not be sufficiently devolved to Scotland as well.

The aim of these stunts is, as I put it to a couple of SNP MPs who I get on with well, to provoke English MPs into saying something offensive thus continuing the cause of nationalism. I mentioned that it was not a good look and made Parliament even more remote from the lives of our constituents. I had this same conversation with Ian Blackford, the SNP’s Westminster leader, on Wednesday evening. With my colleagues somewhat agog, he walked over to me for a lengthy chat and explained why his party feel sore and was hoping I would be able to see his point and encourage dialogue from my own Government to break the deadlock. I do see his constitutional point, up to a certain degree, and am keen to help.

I write of this somewhat bizarre issue, not just to explain myself for missing a match which over a third of the country watched (my train did at least get me back in time for penalties) but because it sets out my approach to politics. Outside of election time, I am firm believer, locally and in Parliament, that it pays to work with your political opponents to advance the goals which will help all constituents. The current need for reform of Social Care is a good example where only a cross-party consensus will deliver change and better care for the elderly and vulnerable. It is for this reason that I try and keep on good terms not only with those on my political side but those opposite. It can be helpful when understanding tribal issues and working a way forward.

Fortunately, the quarter-finals against Sweden are on Saturday afternoon so, unless they have taken to technological espionage, the SNP will not be able to disrupt my viewing and support this time. Come on England.