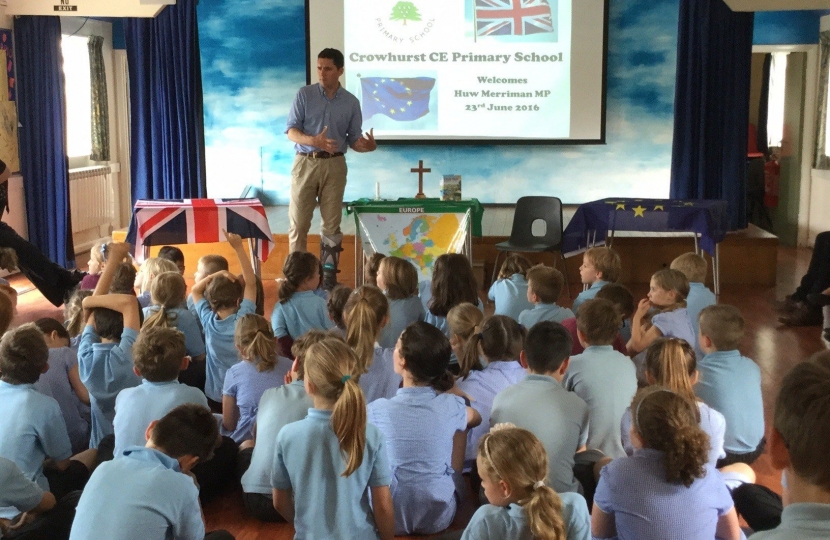 Yesterday voters decided that the future of the United Kingdom would be best served outside of the EU. Having not campaigned for either side, I opted to cast my own vote to Remain. Now we are leaving, I will be working hard to ensure that we put the UK on a firm footing outside of the EU. Our United Kingdom is the fifth largest economy in the world. I am confident that we will remain a great nation and that we will build a new deal which makes us even stronger.

I am aware that many of my constituents will be experiencing a change which they did not want, or vote for. Democracy delivers so much freedom but it also requires us to go with the majority verdict. We are fortunate that we live in a nation where the Government carries out the will of the people, even if it is not always to our individual liking.

I am very saddened that the Prime Minister has announced that he will be standing down. I did not know the Prime Minister before being elected as your MP but have found him to be a warm and supportive person and an outstanding leader who has done so much in his 6 years in office. It upsets me that a man who has steered our economy from the despair of 2010, and delivered over two million new jobs, should be leaving office in this manner.

This referendum has been an extraordinary event. I have been fortunate to have spoken with many voters at my public meetings and schoolchildren in my school talks. I thank every constituent who has got involved in this vote. I hope we all continue to engage in debate and democracy as we shape our nation's future. I also hope that we can all pull together to ensure that our young people, who I spent so much time with over this last week, get the future their talents deserve.