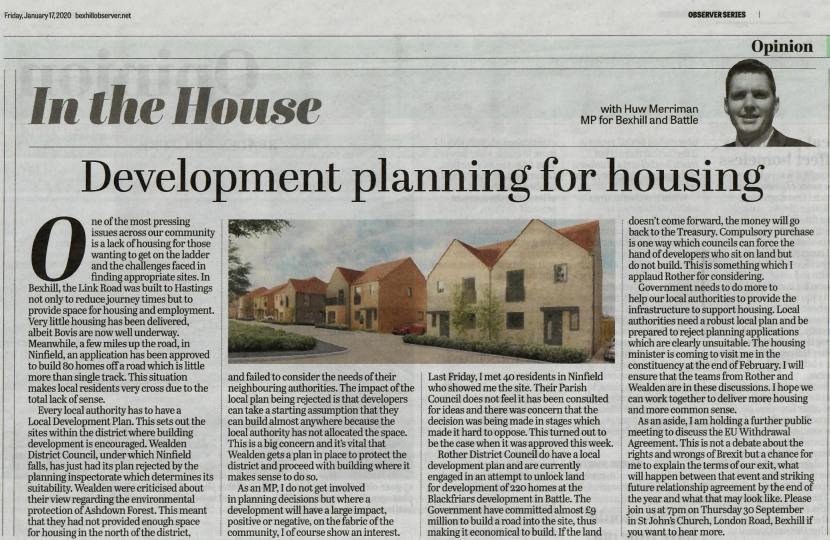 One of the most pressing issues across our community is a lack of housing for those wanting to get on the ladder and the challenges faced in finding appropriate sites. In Bexhill, the Link Road was built to Hastings not only to reduce journey times but to provide space for housing and employment. Very little housing has been delivered, albeit Bovis are now well underway. Meanwhile, a few miles up the road, in Ninfield, an application has been approved to build 80 homes off a road which is little more than single track. This situation makes local residents very cross due to the total lack of sense.

Every local authority has to have a Local Development Plan. This sets out the sites within the district where building development is encouraged. Wealden District Council, under which Ninfield falls, has just had its plan rejected by the planning inspectorate which determines its suitability. Wealden were criticised about their view regarding the environmental protection of Ashdown Forest. This meant that they had not provided enough space for housing in the north of the district, and failed to consider the needs of their neighbouring authorities. The impact of the local plan being rejected is that developers can take a starting assumption that they can build almost anywhere because the local authority has not allocated the space. This is a big concern and it’s vital that Wealden gets a plan in place to protect the district and proceed with building where it makes sense to do so.

As an MP, I do not get involved in planning decisions but where a development will have a large impact, positive or negative, on the fabric of the community, I, of course, show an interest. Last Friday, I met 40 residents in Ninfield who showed me the site. Their Parish Council does not feel it has been consulted for ideas and there was concern that the decision was being made in stages which made it hard to oppose. This turned out to be the case when it was approved this week.

Rother District Council do have a local development plan and are currently engaged in an attempt to unlock land for development of 220 homes at the Blackfriars development in Battle. The Government have committed almost £9 million to build a road into the site, thus making it economical to build. If the land doesn’t come forward, the money will go back to the Treasury. Compulsory purchase is one way which councils can force the hand of developers who sit on land but do not build. This is something which I applaud Rother for considering.

Government needs to do more to help our local authorities to provide the infrastructure to support housing. Local authorities need a robust local plan and be prepared to reject planning applications which are clearly unsuitable. The housing minister is coming to visit me in the constituency at the end of February. I will ensure that the teams from Rother and Wealden are in these discussions. I hope we can work together to deliver more housing and more common sense.

As an aside, I am holding a further public meeting to discuss the EU Withdrawal Agreement. This is not a debate about the rights and wrongs of Brexit but a chance for me to explain the terms of our exit, what will happen between that event and striking future relationship agreement by the end of the year and what that may look like. Please join us at 7pm on Thursday 30 September in St John’s Church, London Road, Bexhill if you want to hear more.