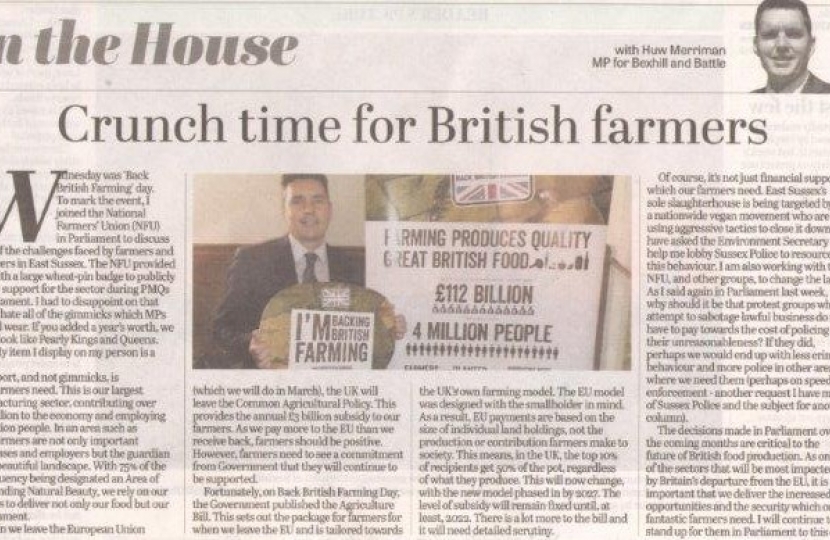 Wednesday was ‘Back British Farming’ day. To mark the event, I joined the National Farmers’ Union (NFU) in Parliament to discuss some of the challenges faced by farmers and producers in East Sussex. The NFU provided MPs with a large wheat-pin badge to publicly display support for the sector during PMQs n Parliament. I had to disappoint on that front; I hate all of the gimmicks which MPs pin and wear. If you added a year’s worth, we would look like Pearly Kings and Queens. The only item I display on my person is a poppy.

Support, and not gimmicks, is what farmers need. This is our largest manufacturing sector, contributing over £110 billion to the economy and employing 3.8 million people. In an area such as ours, farmers are not only important businesses and employers but the guardian of our beautiful landscape. With 75% of the constituency being designated an Area of Outstanding Natural Beauty, we rely on our farmers to deliver not only our food but our environment.

When we leave the European Union (which we will do in March), the UK will leave the Common Agricultural Policy. This provides the annual £3 billion subsidy to our farmers. As we pay more to the EU than we receive back, farmers should be positive. However, farmers need to see a commitment from Government that they will continue to be supported.

Fortunately, on Back British Farming Day, the Government published the Agriculture Bill. This sets out the package for farmers for when we leave the EU and is tailored towards the UK’s own farming model. The EU model was designed with the smallholder in mind. As a result, EU payments are based on the size of individual land holdings, not the production or contribution farmers make to society. This means, in the UK, the top 10% of recipients get 50% of the pot, regardless of what they produce. This will now change, with the new model phased in by 2027. The level of subsidy will remain fixed until, at least, 2022. There is a lot more to the bill and it will need detailed scrutiny.

Of course, it’s not just financial support which our farmers need. East Sussex’s sole slaughterhouse is being targeted by a nationwide vegan movement who are using aggressive tactics to close it down. I have asked the Environment Secretary to help me lobby Sussex Police to resource this behaviour. I am also working with the NFU, and other groups, to change the law. As I said again in Parliament last week, why should it be that protest groups who attempt to sabotage lawful business do not have to pay towards the cost of policing their unreasonableness? If they did, perhaps we would end up with less criminal behaviour and more police in other areas where we need them (perhaps on speeding enforcement - another request I have made of Sussex Police and the subject for another column).

The decisions made in Parliament over the coming months are critical to the future of British food production. As one of the sectors that will be most impacted by Britain’s departure from the EU, it is important that we deliver the increased opportunities and the security which our fantastic farmers need. I will continue to stand up for them in Parliament to this end.