Committee will see our problem parking 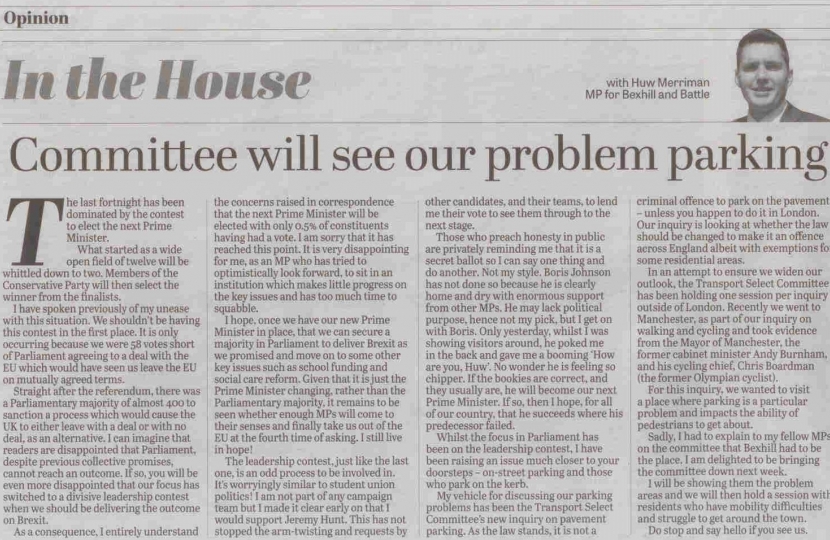 The last fortnight has been dominated by the contest to elect the next Prime Minister. What started as a wide open field of twelve will be whittled down to two. Members of the Conservative Party will then select the winner from the finalists.

I have spoken previously of my unease with this situation. We shouldn’t be having this contest in the first place. It is only occurring because we were 58 votes short of Parliament agreeing to a deal with the EU which would have seen us leave the EU on mutually agreed terms. Straight after the referendum, there was a Parliamentary majority of almost 400 to sanction a process which would cause the UK to either leave with a deal or with no deal, as an alternative. I can imagine that readers are disappointed that Parliament, despite previous collective promises, cannot reach an outcome. If so, you will be even more disappointed that our focus has switched to a divisive leadership contest when we should be delivering the outcome on Brexit.

As a consequence, I entirely understand the concerns raised in correspondence that the next Prime Minister will be elected with only 0.5% of constituents having had a vote. I am sorry that it has reached this point. It is very disappointing for me, as an MP who has tried to optimistically look forward, to sit in an institution which makes little progress on the key issues and has too much time to squabble. I hope, once we have our new Prime Minister in place, that we can secure a majority in Parliament to deliver Brexit as we promised and move on to some other key issues such as school funding and social care reform. Given that it is just the Prime Minister changing, rather than the Parliamentary majority, it remains to be seen whether enough MPs will come to their senses and finally take us out of the EU at the fourth time of asking. I still live in hope!

The leadership contest, just like the last one, is an odd process to be involved in. It’s worryingly similar to student union politics! I am not part of any campaign team but I made it clear early on that I would support Jeremy Hunt. This has not stopped the arm-twisting and requests by other candidates, and their teams, to lend me their vote to see them through to the next stage. Those who preach honesty in public are privately reminding me that it is a secret ballot so I can say one thing and do another. Not my style. Boris Johnson has not done so because he is clearly home and dry with enormous support from other MPs. He may lack political purpose, hence not my pick, but I get on with Boris. Only yesterday, whilst I was showing visitors around, he poked me in the back and gave me a booming ‘How are you, Huw’. No wonder he is feeling so chipper. If the bookies are correct, and they usually are, he will become our next Prime Minister. If so, then I hope, for all of our country, that he succeeds where his predecessor failed.

Whilst the focus in Parliament has been on the leadership contest, I have been raising an issue much closer to your doorsteps – on-street parking and those who park on the kerb. My vehicle for discussing our parking problems has been the Transport Select Committee’s new inquiry on pavement parking. As the law stands, it is not a criminal offence to park on the pavement – unless you happen to do it in London. Our inquiry is looking at whether the law should be changed to make it an offence across England albeit with exemptions for some residential areas.

In an attempt to ensure we widen our outlook, the Transport Select Committee has been holding one session per inquiry outside of London. Recently we went to Manchester, as part of our inquiry on walking and cycling and took evidence from the Mayor of Manchester, the former cabinet minister Andy Burnham, and his cycling chief, Chris Boardman (the former Olympian cyclist). For this inquiry, we wanted to visit a place where parking is a particular problem and impacts the ability of pedestrians to get about. Sadly, I had to explain to my fellow MPs on the committee that Bexhill had to be the place. I am delighted to be bringing the committee down next week. I will be showing them the problem areas and we will then hold a session with residents who have mobility difficulties and struggle to get around the town. Do stop and say hello if you see us.