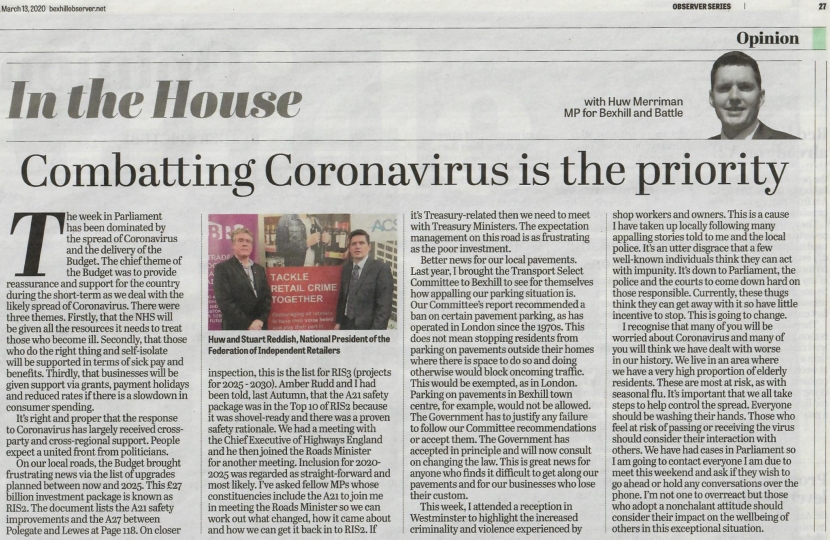 The week in Parliament has been dominated by the spread of Coronavirus and the delivery of the Budget. The chief theme of the Budget was to provide reassurance and support for the country during the short-term as we deal with the likely spread of Coronavirus. There were three themes. Firstly, that the NHS will be given all the resources it needs to treat those who become ill. Secondly, that those who do the right thing and self-isolate will be supported in terms of sick pay and benefits. Thirdly, that businesses will be given support via grants, payment holidays and reduced rates if there is a slowdown in consumer spending.

It’s right and proper that the response to Coronavirus has largely received cross-party and cross-regional support. People expect a united front from politicians.

On our local roads, the Budget brought frustrating news via the list of upgrades planned between now and 2025. This £27 billion investment package is known as RIS2. The document lists the A21 safety improvements and the A27 between Polegate and Lewes at Page 118. On closer inspection, this is the list for RIS3 (projects for 2025 - 2030). Amber Rudd and I had been told, last Autumn, that the A21 safety package was in the Top 10 of RIS2 because it was shovel-ready and there was a proven safety rationale. We had a meeting with the Chief Executive of Highways England and he then joined the Roads Minister for another meeting. Inclusion for 2020- 2025 was regarded as straight-forward and most likely. I’ve asked fellow MPs whose constituencies include the A21 to join me in meeting the Roads Minister so we can work out what changed, how it came about and how we can get it back in to RIS2. If it’s Treasury-related then we need to meet with Treasury Ministers. The expectation management on this road is as frustrating as the poor investment.

Better news for our local pavements. Last year, I brought the Transport Select Committee to Bexhill to see for themselves how appalling our parking situation is. Our Committee’s report recommended a ban on certain pavement parking, as has operated in London since the 1970s. This does not mean stopping residents from parking on pavements outside their homes where there is space to do so and doing otherwise would block oncoming traffic. This would be exempted, as in London. Parking on pavements in Bexhill town centre, for example, would not be allowed. The Government has to justify any failure to follow our Committee recommendations or accept them. The Government has accepted in principle and will now consult on changing the law. This is great news for anyone who finds it difficult to get along our pavements and for our businesses who lose their custom.

This week, I attended a reception in Westminster to highlight the increased criminality and violence experienced by shop workers and owners. This is a cause I have taken up locally following many appalling stories told to me and the local police. It’s an utter disgrace that a few well-known individuals think they can act with impunity. It’s down to Parliament, the police and the courts to come down hard on those responsible. Currently, these thugs think they can get away with it so have little incentive to stop. This is going to change.

I recognise that many of you will be worried about Coronavirus and many of you will think we have dealt with worse in our history. We live in an area where we have a very high proportion of elderly residents. These are most at risk, as with seasonal flu. It’s important that we all take steps to help control the spread. Everyone should be washing their hands. Those who feel at risk of passing or receiving the virus should consider their interaction with others. We have had cases in Parliament so I am going to contact everyone I am due to meet this weekend and ask if they wish to go ahead or hold any conversations over the phone. I’m not one to overreact but those who adopt a nonchalant attitude should consider their impact on the wellbeing of others in this exceptional situation.