Budget gives hope to next generation 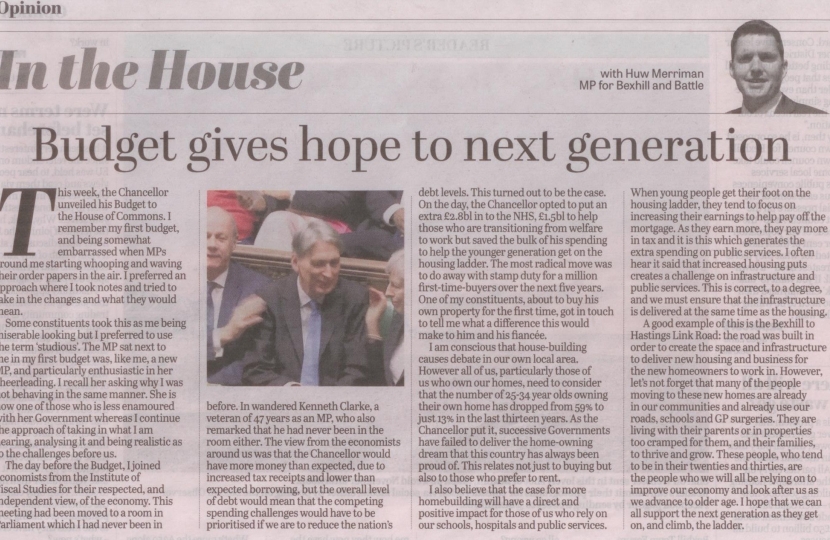 This week, the Chancellor unveiled his Budget to the House of Commons. I remember my first budget, and being somewhat embarrassed when MPs around me starting whooping and waving their order papers in the air. I preferred an approach where I took notes and tried to take in the changes and what they would mean. Some constituents took this as me being miserable looking but I preferred to use the term ‘studious’. The MP sat next to me in my first budget was, like me, a new MP, and particularly enthusiastic in her cheerleading. I recall her asking why I was not behaving in the same manner. She is now one of those who is less enamoured with her Government whereas I continue the approach of taking in what I am hearing, analysing it and being realistic as to the challenges before us.

The day before the Budget, I joined economists from the Institute of Fiscal Studies for their respected, and independent view, of the economy. This meeting had been moved to a room in Parliament which I had never been in before. In wandered Kenneth Clarke, a veteran of 47 years as an MP, who also remarked that he had never been in the room either. The view from the economists around us was that the Chancellor would have more money than expected, due to increased tax receipts and lower than expected borrowing, but the overall level of debt would mean that the competing spending challenges would have to be prioritised if we are to reduce the nation’s debt levels. This turned out to be the case. On the day, the Chancellor opted to put an extra £2.8bl in to the NHS, £1.5bl to help those who are transitioning from welfare to work but saved the bulk of his spending to help the younger generation get on the housing ladder. The most radical move was to do away with stamp duty for a million first-time-buyers over the next five years. One of my constituents, about to buy his own property for the first time, got in touch to tell me what a difference this would make to him and his fiancée.

I am conscious that house-building causes debate in our own local area. However all of us, particularly those of us who own our homes, need to consider that the number of 25-34 year olds owning their own home has dropped from 59% to just 13% in the last thirteen years. As the Chancellor put it, successive Governments have failed to deliver the home-owning dream that this country has always been proud of. This relates not just to buying but also to those who prefer to rent.

I also believe that the case for more homebuilding will have a direct and positive impact for those of us who rely on our schools, hospitals and public services. When young people get their foot on the housing ladder, they tend to focus on increasing their earnings to help pay off the mortgage. As they earn more, they pay more in tax and it is this which generates the extra spending on public services. I often hear it said that increased housing puts creates a challenge on infrastructure and public services. This is correct, to a degree, and we must ensure that the infrastructure is delivered at the same time as the housing. A good example of this is the Bexhill to Hastings Link Road: the road was built in order to create the space and infrastructure to deliver new housing and business for the new homeowners to work in. However, let’s not forget that many of the people moving to these new homes are already in our communities and already use our roads, schools and GP surgeries. They are living with their parents or in properties too cramped for them, and their families, to thrive and grow. These people, who tend to be in their twenties and thirties, are the people who we will all be relying on to improve our economy and look after us as we advance to older age. I hope that we can all support the next generation as they get on, and climb, the ladder.