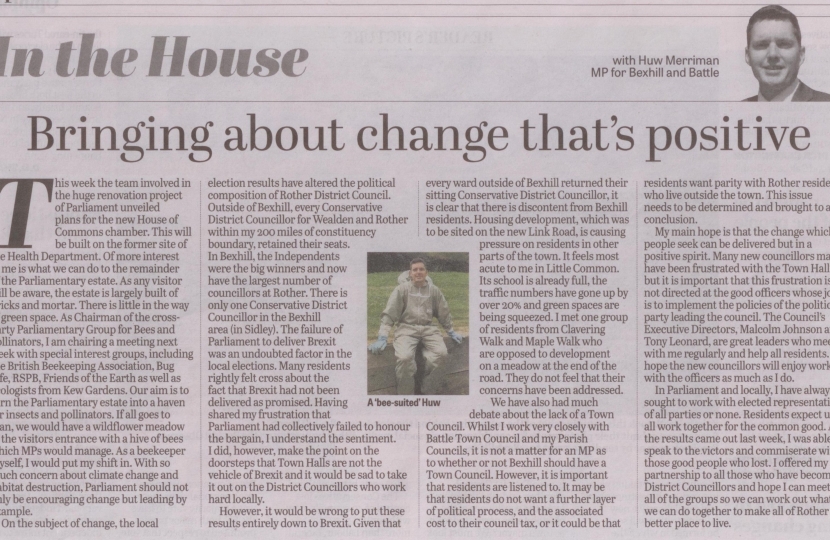 This week the team involved in the huge renovation project of Parliament unveiled plans for the new House of Commons chamber. This will be built on the former site of the Health Department. Of more interest to me is what we can do to the remainder of the Parliamentary estate. As any visitor will be aware, the estate is largely built of bricks and mortar. There is little in the way of green space. As Chairman of the cross-party Parliamentary Group for Bees and Pollinators, I am chairing a meeting next week with special interest groups, including the British Beekeeping Association, Bug Life, RSPB, Friends of the Earth as well as ecologists from Kew Gardens. Our aim is to turn the Parliamentary estate into a haven for insects and pollinators. If all goes to plan, we would have a wildflower meadow at the visitors entrance with a hive of bees which MPs would manage. As a beekeeper myself, I would put my shift in. With so much concern about climate change and habitat destruction, Parliament should not only be encouraging change but leading by example.

On the subject of change, the local election results have altered the political composition of Rother District Council. Outside of Bexhill, every Conservative District Councillor for Wealden and Rother within my 200 miles of constituency boundary, retained their seats. In Bexhill, the Independents were the big winners and now have the largest number of councillors at Rother. There is only one Conservative District Councillor in the Bexhill area (in Sidley). The failure of Parliament to deliver Brexit was an undoubted factor in the local elections. Many residents rightly felt cross about the fact that Brexit had not been delivered as promised. Having shared my frustration that Parliament had collectively failed to honour the bargain, I understand the sentiment. I did, however, make the point on the doorsteps that Town Halls are not the vehicle of Brexit and it would be sad to take it out on the District Councillors who work hard locally.

However, it would be wrong to put these results entirely down to Brexit. Given that every ward outside of Bexhill returned their sitting Conservative District Councillor, it is clear that there is discontent from Bexhill residents. Housing development, which was to be sited on the new Link Road, is causing pressure on residents in other parts of the town. It feels most acute to me in Little Common. Its school is already full, the traffic numbers have gone up by over 20% and green spaces are being squeezed. I met one group of residents from Clavering Walk and Maple Walk who are opposed to development on a meadow at the end of the road. They do not feel that their concerns have been addressed.

We have also had much debate about the lack of a Town Council. Whilst I work very closely with Battle Town Council and my Parish Councils, it is not a matter for an MP as to whether or not Bexhill should have a Town Council. However, it is important that residents are listened to. It may be that residents do not want a further layer of political process, and the associated cost to their council tax, or it could be that residents want parity with Rother residents who live outside the town. This issue needs to be determined and brought to a conclusion.

My main hope is that the change which people seek can be delivered but in a positive spirit. Many new councillors may have been frustrated with the Town Hall but it is important that this frustration is not directed at the good officers whose job is to implement the policies of the political party leading the council. The Council’s Executive Directors, Malcolm Johnson and Tony Leonard, are great leaders who meet with me regularly and help all residents. I hope the new councillors will enjoy working with the officers as much as I do.

In Parliament and locally, I have always sought to work with elected representations of all parties or none. Residents expect us to all work together for the common good. As the results came out last week, I was able to speak to the victors and commiserate with those good people who lost. I offered my partnership to all those who have become District Councillors and hope I can meet all of the groups so we can work out what we can do together to make all of Rother a better place to live.