Brexit: no majority for other solutions 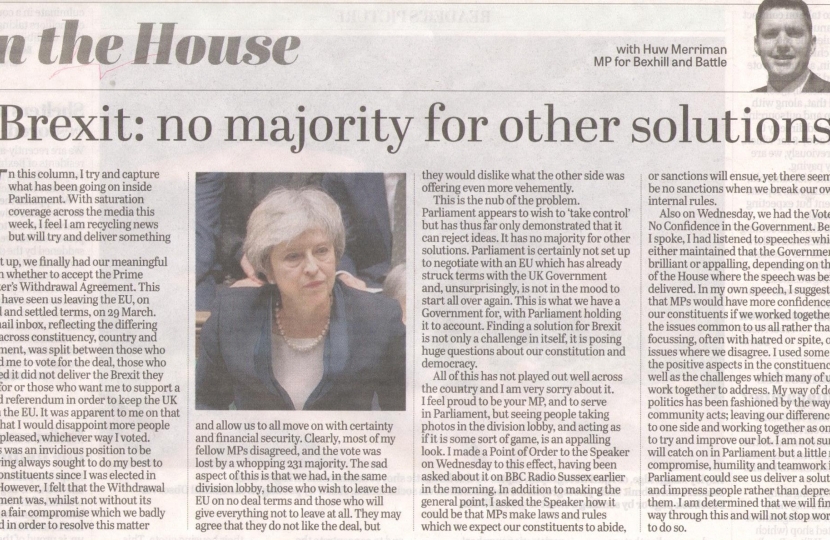 In this column, I try and capture what has been going on inside Parliament. With saturation coverage across the media this week, I feel I am recycling news but will try and deliver something extra!

First up, we finally had our meaningful vote on whether to accept the Prime Minister’s Withdrawal Agreement. This would have seen us leaving the EU, on agreed and settled terms, on 29 March. My email inbox, reflecting the differing views across constituency, country and Parliament, was split between those who wished me to vote for the deal, those who believed it did not deliver the Brexit they voted for or those who want me to support a second referendum in order to keep the UK within the EU. It was apparent to me on that basis that I would disappoint more people than I pleased, whichever way I voted.

This was an invidious position to be in, having always sought to do my best to help constituents since I was elected in 2015. However, I felt that the Withdrawal Agreement was, whilst not without its faults, a fair compromise which we badly needed in order to resolve this matter and allow us to all move on with certainty and financial security. Clearly, most of my fellow MPs disagreed, and the vote was lost by a whopping 231 majority. The sad aspect of this is that we had, in the same division lobby, those who wish to leave the EU on no deal terms and those who will give everything not to leave at all. They may agree that they do not like the deal, but they would dislike what the other side was offering even more vehemently.

This is the nub of the problem. Parliament appears to wish to ‘take control’ but has thus far only demonstrated that it can reject ideas. It has no majority for other solutions. Parliament is certainly not set up to negotiate with an EU which has already struck terms with the UK Government and, unsurprisingly, is not in the mood to start all over again. This is what we have a Government for, with Parliament holding it to account. Finding a solution for Brexit is not only a challenge in itself, it is posing huge questions about our constitution and democracy.

All of this has not played out well across the country and I am very sorry about it. I feel proud to be your MP, and to serve in Parliament, but seeing people taking photos in the division lobby, and acting as if it is some sort of game, is an appalling look. I made a Point of Order to the Speaker on Wednesday to this effect, having been asked about it on BBC Radio Sussex earlier in the morning. In addition to making the general point, I asked the Speaker how it could be that MPs make laws and rules which we expect our constituents to abide, or sanctions will ensue, yet there seem to be no sanctions when we break our own internal rules.

Also on Wednesday, we had the Vote of No Confidence in the Government. Before I spoke, I had listened to speeches which either maintained that the Government was brilliant or appalling, depending on the side of the House where the speech was being delivered. In my own speech, I suggested that MPs would have more confidence from our constituents if we worked together on the issues common to us all rather than focussing, often with hatred or spite, on the issues where we disagree. I used some of the positive aspects in the constituency, as well as the challenges which many of us all work together to address. My way of doing politics has been fashioned by the way our community acts; leaving our differences to one side and working together as one to try and improve our lot. I am not sure it will catch on in Parliament but a little more compromise, humility and teamwork in Parliament could see us deliver a solution and impress people rather than depress them. I am determined that we will find a way through this and will not stop working to do so.