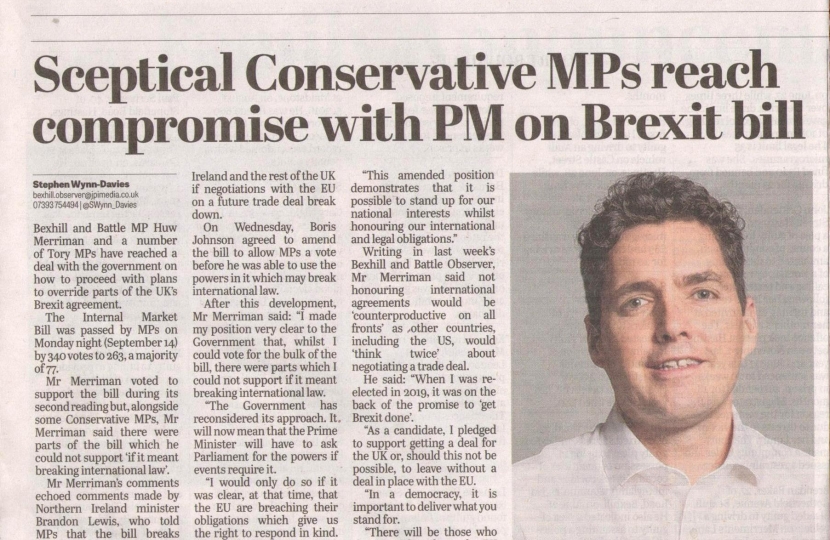 Mr Merriman voted to support the bill during its second reading but, alongside a number of other Conservative MPs, Mr Merriman said there were parts of the bill which he could not support ‘if it meant breaking international law’.

The government claims the bill protects Northern Ireland and the rest of the UK if negotiations with the EU on a future trade deal break down.

On Wednesday, Boris Johnson agreed to amend the bill to allow MPs a vote before he was able to use the powers in it which may break international law.

After this development, Mr Merriman said: “I made my position very clear to the Government that, whilst I could vote for the bulk of the bill, there were parts which I could not support if it meant breaking international law.

“The Government has reconsidered its approach. It will now mean that the Prime Minister will have to ask Parliament for the powers if events require it. I would only do so if it was clear, at that time, that the EU are breaching their obligations which give us the right to respond in kind. I’m only willing to make this determination at the time; doing so beforehand would breach international law. This amended position demonstrates that it is possible to stand up for our national interests whilst honouring our international and legal obligations.”

Writing in last week’s Bexhill and Battle Observer, Mr Merriman said not honouring international agreements would be ‘counterproductive on all fronts’ as countries such as America, Australia and beyond would ‘think twice’ about negotiating a trade deal.

Ahead of Monday night’s vote, Mr Merriman said he would do his best to ensure the bill was passed, and hoped it would give ‘legal certainty and continuity for businesses and people to work and trade’ across the four nations of the United Kingdom.

He added: “When I was re-elected in 2019, it was on the back of the promise to ‘get Brexit done’. As a candidate, I pledged to support getting a deal for the UK or, should this not be possible, to leave without a deal in place with the EU. In a democracy, it is important to deliver what you stand for. There will be those who do not wish to leave the EU but very few would deny that there was a large mandate for the Government to do so.”