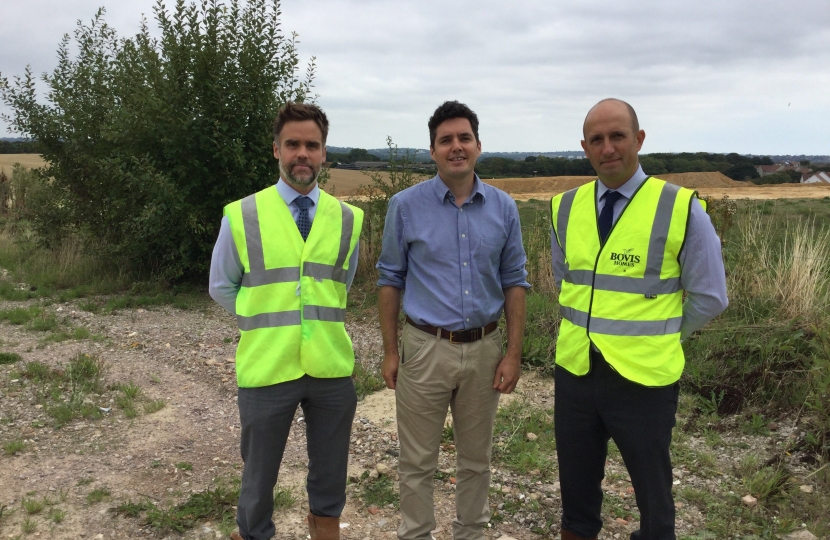 Bexhill MP Huw Merriman met with senior directors from Bovis Homes in north Bexhill last Wednesday (22nd August) to hear more about their plans for housing, following his recent call for action on the designated housing sites for the town.

Both Doug and Matt reiterated Bovis Homes' commitment to developing housing on this site, in what they hailed as a ‘successful’ meeting with the MP. They explained that action to begin building had taken longer than they had hoped due to the need for extended archaeological and ecological studies and a desire by both Bovis Homes and Rother District Council to ensure that the final plans and designs for the development were the best they could be.

The ecological works are now progressing well and Bovis Homes expects to be on site to begin actual housing development in the next couple of months.

Huw Merriman said: "I was pleased that Bovis Homes responded positively to my recent call for action. Like many local residents, I was concerned that the site was not being developed and yet other housing across Bexhill, most notably in Little Common, seem to be progressing quickly.

“I appreciate that this is a significant and flagship development for Bexhill so this level of attention to detail is important for all parties. However, it has been 29 months (29th March 2016) since outline planning permission was given, so we do need to crack on.

“I am pleased to hear that Bovis Homes now has clearance from those holding matters up and are ready to move to the next stage. Speaking to Bovis Homes, it seems to me that some of the delay has been outside of their control. This shows there is more which Government could do to force other organisations to speed up once outline permission has been granted. I will be making that point to Ministers in Parliament.”

Doug said: “We were delighted to welcome Mr Merriman to the Bexhill development, where we are committed to providing both high quality housing and nearly £10 million of community benefits. We have been increasingly frustrated that house building has not been able to start on the development and support his ambition to improve the delivery process after outline permission has been granted.”

A total of 1,050 homes will be built at the location, including 315 designated as affordable properties. Almost £10 million will be invested by Bovis Homes into the community, including around £2 million towards transport improvements, about £2.9 million for education and £2.5 million for the new public open space.