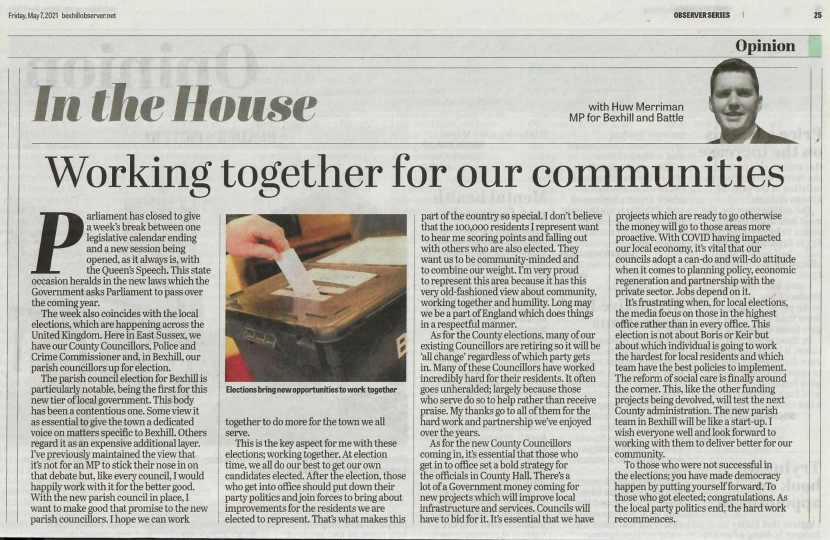 Parliament has closed to give a week’s break between one legislative calendar ending and a new session being opened, as it always is, with the Queen’s Speech. This state occasion heralds in the new laws which the Government asks Parliament to pass over the coming year.

The week also coincides with the local elections, which are happening across the United Kingdom. Here in East Sussex, we have our County Councillors, Police and Crime Commissioner and, in Bexhill, our parish councillors up for election.

The parish council election for Bexhill is particularly notable, being the first for this new tier of local government. This body has been a contentious one. Some view it as essential to give the town a dedicated voice on matters specific to Bexhill. Others regard it as an expensive additional layer. I’ve previously maintained the view that it’s not for an MP to stick their nose in on that debate but, like every council, I would happily work with it for the better good. With the new parish council in place, I want to make good that promise to the new parish councillors. I hope we can work together to do more for the town we all serve.

This is the key aspect for me with these elections; working together. At election time, we all do our best to get our own candidates elected. After the election, those who get into office should put down their party politics and join forces to bring about improvements for the residents we are elected to represent. That’s what makes this part of the country so special. I don’t believe that the 100,000 residents I represent want to hear me scoring points and falling out with others who are also elected. They want us to be community-minded and to combine our weight. I’m very proud to represent this area because it has this very old-fashioned view about community, working together and humility. Long may we be a part of England which does things in a respectful manner.

As for the County elections, many of our existing Councillors are retiring so it will be ‘all change’ regardless of which party gets in. Many of these Councillors have worked incredibly hard for their residents. It often goes unheralded; largely because those who serve do so to help rather than receive praise. My thanks go to all of them for the hard work and partnership we’ve enjoyed over the years.

As for the new County Councillors coming in, it’s essential that those who get in to office set a bold strategy for the officials in County Hall. There’s a lot of a Government money coming for new projects which will improve local infrastructure and services. Councils will have to bid for it. It’s essential that we have projects which are ready to go otherwise the money will go to those areas more proactive. With COVID having impacted our local economy, it’s vital that our councils adopt a can-do and will-do attitude when it comes to planning policy, economic regeneration and partnership with the private sector. Jobs depend on it.

It’s frustrating when, for local elections, the media focus on those in the highest office rather than in every office. This election is not about Boris or Keir but about which individual is going to work the hardest for local residents and which team have the best policies to implement. The reform of social care is finally around the corner. This, like the other funding projects being devolved, will test the next County administration. The new parish team in Bexhill will be like a start-up. I wish everyone well and look forward to working with them to deliver better for our community.

To those who were not successful in the elections; you have made democracy happen by putting yourself forward. To those who got elected; congratulations. As the local party politics end, the hard work recommences.