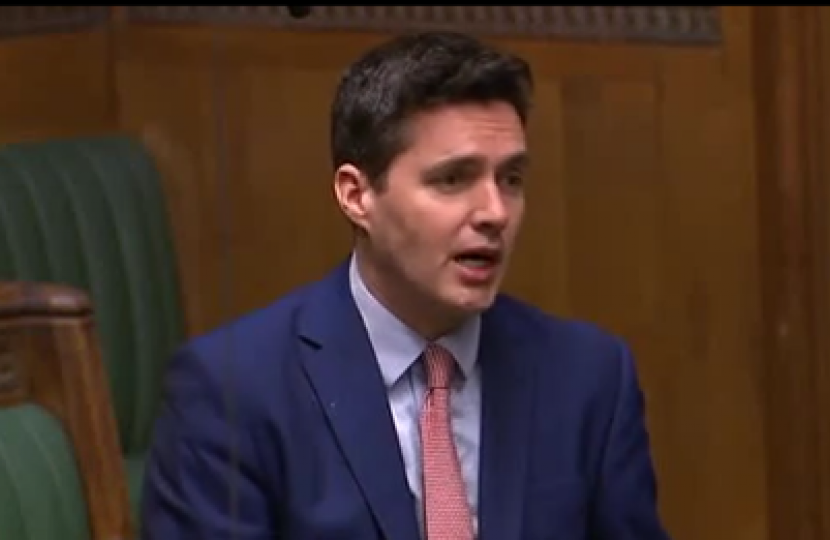 The cost of social care is set to rise of the next decade as the number of elderly in our society increases. This is especially true in Bexhill & Battle as we have 30% of residents over the age of 65. I believe that the best way to achieve much needed reform in this area is to have a centralised system, which would be brought about by working on a cross-party basis. Germany achieved this in the '90s and introduced a policy of long-term social care insurance funds. Watch my speech below:

It is a pleasure to follow the hon. Member for Chesterfield (Mr Perkins) and all the other contributors. There seems to be cross-party consensus that we need to find a solution for all our constituents. I welcome the new Care Minister to her place. We entered the House together, and I know that this subject is a real passion of hers. I am very excited that she is in post, and I think we can expect great things from her in this area of reform. I also thank her predecessor, my hon. Friend the Member for Gosport (Caroline Dinenage); on the day that the chairs were rearranged, she was in my constituency opening a new hospice, and she was absolutely wonderful to all the staff and patients.

It is a delight to speak in this debate, because this issue is the key concern in my constituency, as it will be in many constituencies. We talk about the fact that 18% of people across the UK are over the age of 65, and that that figure will rise to just shy of 25% of the population by 2040. But in my constituency, 30% of constituents are already over the age of 65. That is absolutely fantastic because we are rich in seniority, but it does mean that there are people who have difficult needs and challenges. In a constituency such as mine, people tend to retire down to the coast and downsize, which means they live in smaller properties and pay much less council tax. However, they also tend to need more services from the local community. It is for that very reason that we cannot continue with the concept of council tax funding social care. It is a postcode lottery, and the places that need the most are given the least when it comes to yield.

I would like to see the system centralised, but rather than having another NHS system, we should inject a bit more reform and interest. That is why I said to the Secretary of State that it would be right for us to follow the German model. In the ’90s, Germany had the exact same issues that we have today, with regional imbalances meaning that parts of the German republic just could not afford social care at a local level. There was also great unfairness in the country because certain people just could not access the care that they needed, and it would wipe out their assets. Both parties then fundamentally agreed that it was in the interests of all their constituents to work together on a cross-party basis to deliver reform. That was when the policy of long-term social care insurance funds was established.

The German model requires individuals to pay in. No individual pays more than €138 a month, and the employer matches that amount. Retired people pay the full amount themselves, so the policy gives a nod to intergenerational fairness. It takes risk out of the system; if one individual has greater needs than another, that is ​not factored into the amount they pay. Crucially, it has been popular. People do not talk about social care as a political issue in Germany in the way that they do in this country.

In a way, this situation is an absolute tragedy. Opposition Front Benchers rightly talk about the years that we have had in Government in which we could have fixed the issue, but they do not focus on what had gone on since 1997. The Labour Government absolutely ducked this issue and were faced with calls from the Conservatives of “death tax”. In return, we got that back in spades when we talked with honesty in our 2017 manifesto and proposed a policy that was then labelled the “dementia tax”. Our constituents—all of us, across the House—must absolutely despair.

Will the hon. Gentleman give way?

I will give way to the hon. Lady, because a couple of years ago when I made the point that I hoped we could work on a cross-party basis, the talk back to me was, “Actually, that cost you the election, and we wouldn’t work with you on that basis.” I found that response rather frustrating, so I hope for more.

I do not recall that I ever said that, but there is a key point in what the hon. Gentleman is saying. Our recollection is that it was not the Labour party that labelled the Conservatives’ proposal the dementia tax. I think it was actually one of the national charities and the phrase then got taken up by the media, so I ask the hon. Member not to pin that one on us. It is important that we establish cross-party talks, but the people he should be addressing his comments to are on his own Front Bench. Ministers have had since October to follow up on the point I raised with the Secretary of State about cross-party talks, but they have done nothing. We keep hearing about cross-party talks, but they are not happening because the Government are not doing anything about it.

I remember well the exchange that I had with the hon. Lady a couple of years ago. The point I was making was that we did not seem that far apart—she talked about the fact that more funds needed to be raised, and so did we, perhaps with people taking individual responsibility—but the response I got back was more like a lesson on why such policies cost us our majority. That may have been a fair point, but my frustration was that we were being honest and straight with people that if we actually want to reform the system, we may need to ask people to pay more in. Most people do not realise that they already have to pay for it; it is only when they access the service that they fully understand what it really costs them. A lot of people—about 50% of the population—think that the NHS takes care of social care for them. They do not understand.

Whenever we try to propose reform around election times, it turns into a political football. In a way, this is the time to have the conversation, because I do not believe there will be an election for many years to come, so there is the opportunity for us to work cross-party. The hon. Lady is absolutely right: for cross-party talks to occur, she needs a proper invite, and I very much hope that that will be forthcoming. However, given that we now have a Conservative majority, in the event that, sadly, these cross-party talks do not work out—as I say, ​I hope they do, because that is the greatest chance we have of delivering reform and persuading the public that we are all in this together on their behalf—then I very much hope that we will use our ideas, our mission and our majority to put reform through rather than saying that it has faltered because we cannot get consensus.

The most vulnerable, the elderly and the people who have worked hard all their lives are now lacking in dignity within the system because we simply do not have enough money in place. We have not delivered the reforms that we talk about in this place constantly but still fail to enact. I very much hope that this Government will do that, hopefully on a cross-party basis, but if that does not reach fruition, then by inputting our own principles, our own policies and our own devotion to the people I am talking about, so that we give them and the generations to come a better future.