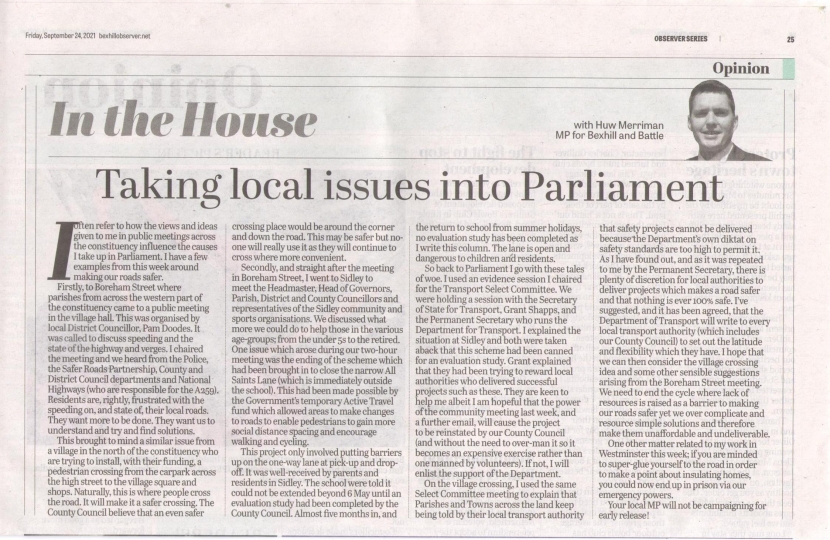 I often refer to how the views and ideas given to me in public meetings across the constituency influence the causes I take up in Parliament. I have a few examples from this week around making our roads safer.

Firstly, to Boreham Street where parishes from across the western part of the constituency came to a public meeting in the village hall. This was organised by local District Councillor, Pam Doodes. It was called to discuss speeding and the state of the highway and verges. I chaired the meeting and we heard from the Police, the Safer Roads Partnership, County and District Council departments and National Highways (who are responsible for the A259). Residents are, rightly, frustrated with the speeding on, and state of, their local roads. They want more to be done. They want us to understand and try and find solutions.

This brought to mind a similar issue from a village in the north of the constituency who are trying to install, with their funding, a pedestrian crossing from the carpark across the high street to the village square and shops. Naturally, this is where people cross the road. It will make it a safer crossing. The County Council believe that an even safer crossing place would be around the corner and down the road. This may be safer but no-one will really use it as they will continue to cross where more convenient.

Secondly, and straight after the meeting in Boreham Street, I went to Sidley to meet the Headmaster, Head of Governors, Parish, District and County Councillors and representatives of the Sidley community and sports organisations. We discussed what more we could do to help those in the various age-groups; from the under 5s to the retired. One issue which arose during our two-hour meeting was the ending of the scheme which had been brought in to close the narrow All Saints Lane (which is immediately outside the school). This had been made possible by the Government’s temporary Active Travel fund which allowed areas to make changes to roads to enable pedestrians to gain more social distance spacing and encourage walking and cycling. This project only involved putting barriers up on the one-way lane at pick-up and drop-off. It was well-received by parents and residents in Sidley. The school were told it could not be extended beyond 6 May until an evaluation study had been completed by the County Council. Almost five months in, and the return to school from summer holidays, no evaluation study has been completed as I write this column. The lane is open and dangerous to children and residents.

So back to Parliament I go with these tales of woe. I used an evidence session I chaired for the Transport Select Committee. We were holding a session with the Secretary of State for Transport, Grant Shapps, and the Permanent Secretary who runs the Department for Transport. I explained the situation at Sidley and both were taken aback that this scheme had been canned for an evaluation study. Grant explained that they had been trying to reward local authorities who delivered successful projects such as these. They are keen to help me albeit I am hopeful that the power of the community meeting last week, and a further email, will cause the project to be reinstated by our County Council (and without the need to over-man it so it becomes an expensive exercise rather than one manned by volunteers). If not, I will enlist the support of the Department.

On the village crossing, I used the same Select Committee meeting to explain that Parishes and Towns across the land keep being told by their local transport authority that safety projects cannot be delivered because the Department’s own diktat on safety standards are too high to permit it. As I have found out, and as it was repeated to me by the Permanent Secretary, there is plenty of discretion for local authorities to deliver projects which makes a road safer and that nothing is ever 100% safe. I’ve suggested, and it has been agreed, that the Department of Transport will write to every local transport authority (which includes our County Council) to set out the latitude and flexibility which they have. I hope that we can then consider the village crossing idea and some other sensible suggestions arising from the Boreham Street meeting. We need to end the cycle where lack of resources is raised as a barrier to making our roads safer yet we over complicate and resource simple solutions and therefore make them unaffordable and undeliverable.

One other matter related to my work in Westminster this week; if you are minded to super-glue yourself to the road in order to make a point about insulating homes, you could now end up in prison via our emergency powers. Your local MP will not be campaigning for early release!