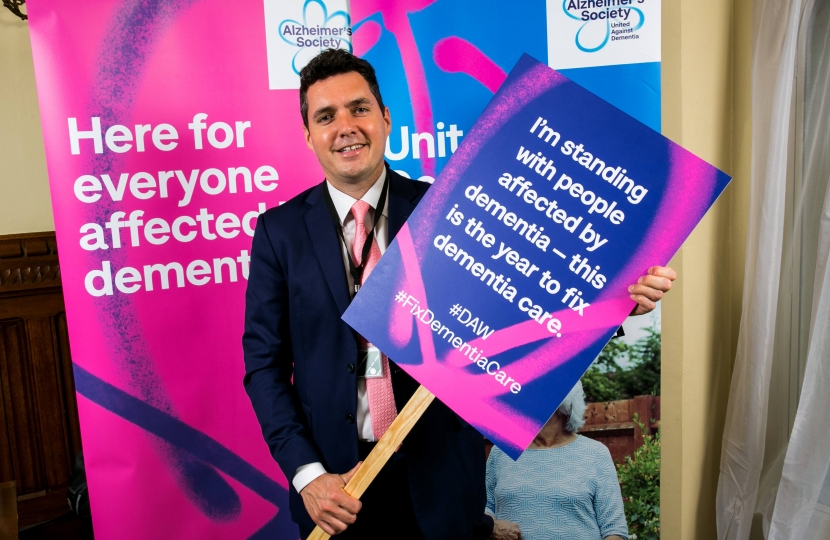 Local MP Huw Merriman spoke in a Parliamentary Debate on Dementia Research and called for a better deal for those with dementia, and the selfless people who care for them.

Bexhill and Battle has the second highest proportion of people with dementia than of any other parliamentary constituency. Huw has previously met people who have cared for those with dementia in Parliament, and is a music for dementia champion.

It is real pleasure to contribute to the debate on dementia research in the UK. As the hon. Member for Nottingham South said, Dementia affects around 944,000 people in the UK, which is 1.33% of the population, and also takes them away from us, sometimes too early. It was the leading cause of death in December 2021, when dementia and Alzheimer’s accounted for 12.4% of all deaths. In 2021, when we were rightly fixated on covid and its impact, covid accounted for 5.4% of deaths. Frankly, we do not talk enough about dementia and what it does. Perhaps if we talked more about the impacts, people might join us in pressing for more change. As the hon. Member said, funding for research is relatively low. Cancer attracts three times as much, despite the statistics I have just given.

On local interaction, I am very lucky, because we have built up a good deal of expertise through our links in East Sussex. My office team have been trained as dementia friends, thanks to the Alzheimer’s Society. That has helped me to engage a lot better with constituents who face personal challenges. When I was first elected in 2015, I went to a specialist dementia care home in Heathfield. We MPs do not get training for that type of thing—or for many other things—so I asked the matron running the unit, “How do I deal with it when something occurs?” Her advice was: “Just go into the same world as them. Don’t be embarrassed; just go there and be part of it.” I have remembered that advice and followed it ever since. We have ended up doing some very funny things, but I have never once felt silly; I felt as though I was engaging and having fun, and that has stayed with me.

I am really lucky with all our care homes and specialist units. I absolutely love to watch young children come from the schools to read to those in the care homes. Of course, some residents have difficulties with their short-term memory, but some of them have an extraordinary long-term memory. I remember one lady in Battle who did not contribute, but then stood up and recited, without a flaw, “I wandered lonely as a cloud”. It was an incredibly moving moment. The children were shocked, and I will always remember it.

Next week, I will visit a local charity, Young at Heart, where there is a lovely connection between young people from schools and preschools, and those who are older.

It is right to teach young people about dementia in schools and almost require every single school to have that partnership, to encourage young people to feel as if they can let go. It is an excellent suggestion. I hope the Minister heard it and will take it into account.

We are fortunate to have local pioneers. Mention has been made of ensuring that people get tested, because early intervention can help a great deal. A year or so ago, I visited a pioneering local memory assessment service based in Bexhill, which supports patients with dementia across both my constituency and the wider East Sussex coast. Dr Stephen French, who leads the memory assessment service, is a GP, which makes the service quite novel. I took part in a memory assessment test and went all the way through it myself, to see exactly what those who participate have to undertake and how difficult it is.

The service has been running for seven years and has proved successful with local residents. What is great about it is that it is a community-based dementia service, so anyone presenting with a memory problem will be seen by their local GP in the first instance. After they have gone through other causes of memory loss, such as depression or circulatory disease, they will be referred to a local dementia specialist for a full assessment, at a GP close to their home. So, they could be having that difficult test with their own GP. That means that those who are already worried about memory loss are able to go into setting with which they are more familiar. It is less intimidating than going to a hospital or mental health hospital, which is where such tests sometimes take place. Unsurprisingly, it means more people will take up the offer and attend the test. That is hugely important for a constituency such as mine, where there are so many people who are impacted.

When the test is positive, that comes as a great shock to both the individual and their family, but with this particular service, two weeks after diagnosis patients receive a visit from a local dementia support worker to see how they are getting on and to discuss the range of support services available to them. Then there is aftercare, followed up by a medical review to see how the patient is coping and to assess the effectiveness of any medication. Their pathway then comes back into their own GP service, so it becomes one of the conditions that they are being treated for.

As well as talking about research, which I will go on to mention, I feel that we have to encourage early diagnosis in a local setting, and we have to take away the stigma of it. That comes back to the point made by the hon. Member for Ochil and South Perthshire (John Nicolson) around interacting. There is also a stigma about going to have the tests. I would encourage any colleague of mine to go and have the test, in the same way that I have. It is incredibly insightful.

Let me return to the main thrust of this debate, which is about research. I agree with the hon. Member for Oldham East and Saddleworth that this debate should be about hope. I agree with her that research will find that cure, and I agree with her that it is a case of “when”, not “if”, but I also agree with her that it requires continued funding of the amazing life science and research sector with which we are blessed in this country. I particularly note the UK Dementia Research Institute, which was set up in 2017. Its main hub is at University College London, but there are six other centres across the UK, funded by the Medical Research Council, Alzheimer’s Society and Alzheimer’s Research UK. It will be doing the job to deliver the moonshot cure that the hon. Member talked about, but it will require a good chunk of the £5 billion committed in the 2021 spending review to go into research on dementia.

I am encouraged by the Government’s track record. In the five-year plan in 2015, the Challenge on Dementia, there was a commitment to spend £300 million by March 2020. In fact that amount was spent by March 2019, and it was £344 million. So the track record is there, but there were some bold pledges in my own 2019 manifesto on what we would do as a party to help deliver that cure for dementia. Let me say to the Minister—I know that he cares deeply about this issue—that if he needs any help at all in trying to strong-arm as much of that budget as possible towards dementia, he will always have a friend in me.

It has been a pleasure to speak in the debate. This is an issue that affects so many of my constituents—so many wonderful people who care or who suffer. I am delighted that we have secured the debate, and have raised the flag for them.