Evidence for face coverings should be clear 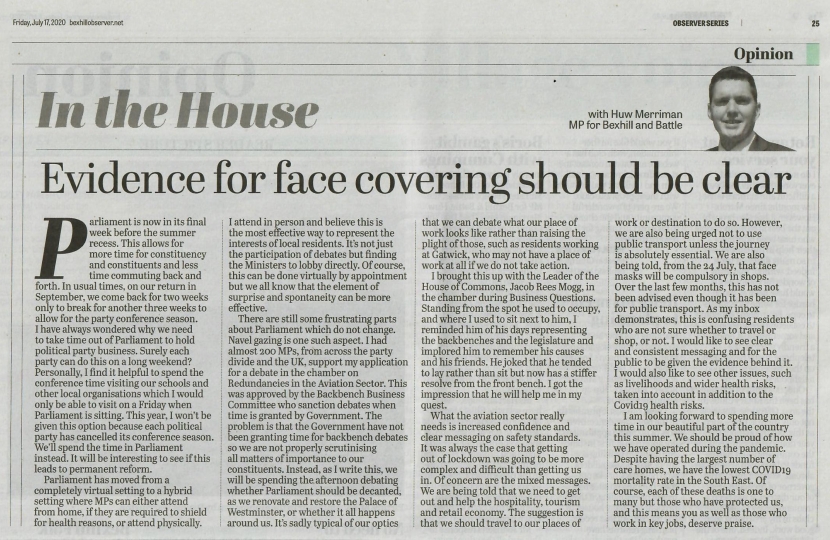 Parliament is now in its final week before the summer recess. This allows for more time for constituency and constituents and less time commuting back and forth. In usual times, on our return in September, we come back for two weeks only to break for another three weeks to allow for the party conference season. I have always wondered why we need to take time out of Parliament to hold political party business. Surely each party can do this on a long weekend? Personally, I find it helpful to spend the conference time visiting our schools and other local organisations which I would only be able to visit on a Friday when Parliament is sitting. This year, I won’t be given this option because each political party has cancelled its conference season. We’ll spend the time in Parliament instead. It will be interesting to see if this leads to permanent reform.

Parliament has moved from a completely virtual setting to a hybrid setting where MPs can either attend from home, if they are required to shield for health reasons, or attend physically. I attend in person and believe this is the most effective way to represent the interests of local residents. It’s not just the participation of debates but finding the Ministers to lobby directly. Of course, this can be done virtually by appointment but we all know that the element of surprise and spontaneity can be more effective.

There are still some frustrating parts about Parliament which do not change. Navel gazing is one such aspect. I had almost 200 MPs, from across the party divide and the UK, support my application for a debate in the chamber on Redundancies in the Aviation Sector. This was approved by the Backbench Business Committee who sanction debates when time is granted by Government. The problem is that the Government have not been granting time for backbench debates so we are not properly scrutinising all matters of importance to our constituents. Instead, as I write this, we will be spending the afternoon debating whether Parliament should be decanted, as we renovate and restore the Palace of Westminster, or whether it all happens around us. It’s sadly typical of our optics that we can debate what our place of work looks like rather than raising the plight of those, such as residents working at Gatwick, who may not have a place of work at all if we do not take action.

I brought this up with the Leader of the House of Commons, Jacob Rees Mogg, in the chamber during Business Questions. Standing from the spot he used to occupy, and where I used to sit next to him, I reminded him of his days representing the backbenches and the legislature and implored him to remember his causes and his friends. He joked that he tended to lay rather than sit but now has a stiffer resolve from the front bench. I got the impression that he will help me in my quest.

What the aviation sector really needs is increased confidence and clear messaging on safety standards. It was always the case that getting out of lockdown was going to be more complex and difficult than getting us in. Of concern are the mixed messages. We are being told that we need to get out and help the hospitality, tourism and retail economy. The suggestion is that we should travel to our places of work or destination to do so. However, we are also being urged not to use public transport unless the journey is absolutely essential. We are also being told, from the 24 July, that face masks will be compulsory in shops. Over the last few months, this has not been advised even though it has been for public transport. As my inbox demonstrates, this is confusing residents who are not sure whether to travel or shop, or not. I would like to see clear and consistent messaging and for the public to be given the evidence behind it. I would also like to see other issues, such as livelihoods and wider health risks, taken into account in addition to the Covid19 health risks.

I am looking forward to spending more time in our beautiful part of the country this summer. We should be proud of how we have operated during the pandemic. Despite having the largest number of care homes, we have the lowest COVID19 mortality rate in the South East. Of course, each of these deaths is one too many but those who have protected us, and this means you as well as those who work in key jobs, deserve praise.