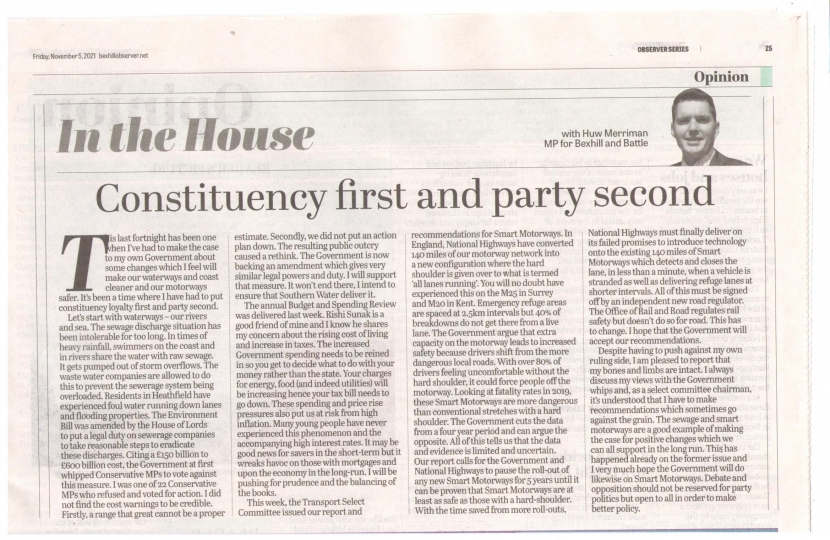 This last fortnight has been one when I’ve had to make the case to my own Government about some changes which I feel will make our waterways and coast cleaner and our motorways safer. It’s been a time where I have had to put constituency loyalty first and party second.

Let’s start with waste. The sewage discharge situation has been intolerable for too long. Residents in Heathfield have had foul water running down lanes and flooding properties. Swimmers on the coast are sharing the water with sewage pumped out. The Environment Bill was amended by the House of Lords to put a legal duty on sewage companies to take reasonable steps to eradicate these discharges. Citing a £150 billion to £600 billion cost, the Government at first whipped Conservative MPs to vote against this measure. I was one of 22 Conservative MPs who refused and voted for action. I did not find the cost warnings to be credible. Firstly, a range that great cannot be a proper estimate. Secondly, we did not put an action plan down. The resulting outcry, when this amendment was defeated, thankfully caused a rethink. We now have a very similar legal power and duty in an amendment which the Government is backing. I will support that measure. It won’t end there however; I intend to ensure that Southern water deliver to it.

Talking of finance, the annual Budget and Spending Review was delivered last week. Rishi Sunak is a good friend of mine and I know he shares my concern about the rising cost of living and the increase in taxes which you will be experiencing. This increased Government spending needs to be reigned in so you get to decide what to do with your money rather than the state. Your charges for energy, food (and indeed utilities) will be increasing hence your tax bill needs to go down. These spending and price rise pressures also put us at risk from high inflation. Many young people have never experienced this phenomenon and the accompanying high interest rates. It may be good news for savers in the short-term but it wreaks havoc on those with mortgages and upon the economy in the long-run. I will be pushing for prudence and the balancing of the books.

This week, the Transport Select Committee issued our report and recommendations for Smart Motorways. In England, National Highways have converted 140 miles of our motorway network into a new configuration where the hard shoulder is given over to what is termed ‘all lanes running’. You will no doubt have experienced this on the M25 in Surrey and M20 in Kent. Emergency refuge areas are spaced at 2.5km intervals but 40% of breakdowns do not get there from a live lane. The Government argue that extra capacity on the motorway leads to increased safety because drivers shift from the more dangerous local roads. With over 80% of drivers feeling uncomfortable without the hard shoulder, it could force people off the motorway. Looking at fatality rates in 2019, these Smart Motorways are more dangerous than conventional stretches with a hard shoulder. The Government cuts the data from a four year period and can argue the opposite. All of this tells us that the data and evidence is limited and uncertain. Our report calls for the Government and National Highways to pause the roll-out of any new Smart Motorways for 5 years until it can be proven that Smart Motorways are at least as safe as those with a hard-shoulder. With the time saved from more roll-outs, National Highways must finally deliver on its failed promises to introduce technology onto the existing 140 miles of Smart Motorways which detects and closes the lane, in less than a minute, when a vehicle is stranded as well as delivering refuge lanes at shorter intervals. All of this must be signed off by a independent new road regulator. The Office of Rail and Road regulates rail safety but doesn’t do so for rail. This has to change. I hope that the Government will accept our recommendations.

Despite having to push against my own ruling side, I am pleased to report that my bones and limbs are intact. I always discuss my views with the Government whips and, as a select committee chairman, it’s understood that I have to make recommendations which sometimes go against the grain. The sewage and smart motorways are a good example of making the case for positive changes which we can all support in the long run. This has happened already on the former issue and I very much hope the Government will do likewise on Smart Motorways. Debate and opposition should not be reserved for party politics but open to all in order to make better policy.