The Week in Westminster 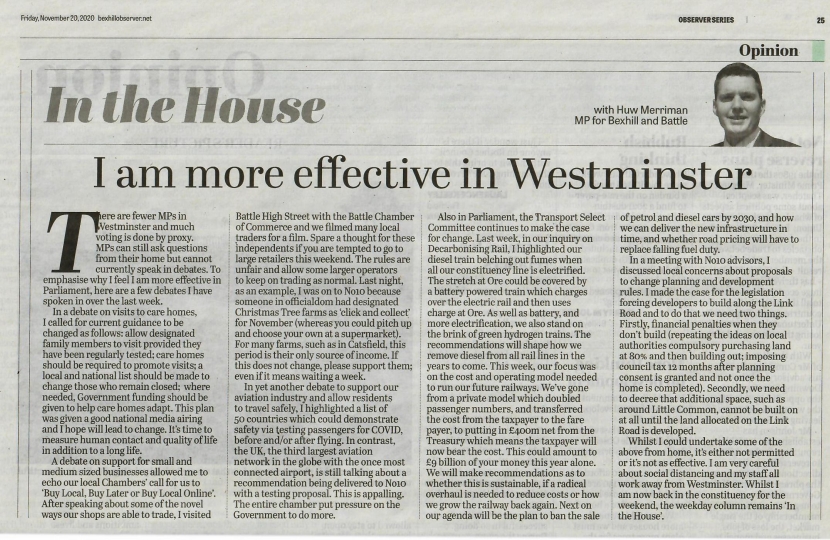 There are fewer MPs in Westminster and much voting is done by proxy. MPs can still ask questions from their home but cannot currently speak in debates. To emphasise why I feel I am more effective in Parliament, here are a few debates I have spoken in over the last week.

In a debate on visits to care homes, I called for current guidance to be changed as follows: allow designated family members to visit provided they have been regularly tested; care homes should be required to promote visits; a local and national list should be made to change those who remain closed;  where needed, Government funding should be given to help care homes adapt. This plan was given a good national media airing and I hope will lead to change. It’s time to measure human contact and quality of life in addition to a long life.

A debate on support for small and medium sized businesses allowed me to echo our local Chambers’ call for us to ‘Buy Local, Buy Later or Buy Local Online’. After speaking about some of the novel ways our shops are able to trade, I visited Battle High Street with the Battle Chamber of Commerce and we filmed many local traders for a film. Spare a thought for these independents if you are tempted to go to large retailers this weekend. The rules are unfair and allow some larger operators to keep on trading as normal. Last night, as an example, I was on to No10 because someone in officialdom had designated Christmas Tree farms as ‘click and collect’ for November (whereas you could pitch up and choose your own at a supermarket). For many farms, such as in Catsfield, this period is their only source of income. If this does not change, please support them; even if it means waiting a week.

In yet another debate to support our aviation industry and allow residents to travel safely, I highlighted a list of 50 countries which could demonstrate safety via testing passengers for COVID, before and/or after flying. In contrast, the UK, the third largest aviation network in the globe with the once most connected airport, is still talking about a recommendation being delivered to No10 with a testing proposal. This is appalling. The entire chamber put pressure on the Government to do more.

Also in Parliament, the Transport Select Committee continues to make the case for change. Last week, in our inquiry on Decarbonising Rail, I highlighted our diesel train belching out fumes when all our constituency line is electrified. The stretch at Ore could be covered by a battery powered train which charges over the electric rail and then uses charge at Ore. As well as battery, and more electrification, we also stand on the brink of green hydrogen trains. The recommendations will shape how we remove diesel from all rail lines in the years to come. This week, our focus was on the cost and operating model needed to run our future railways. We’ve gone from a private model which doubled passenger numbers, and transferred the cost from the taxpayer to the fare payer, to putting in £400m net from the Treasury which means the taxpayer will now bear the cost. This could amount to £9 billion of your money this year alone. We will make recommendations as to whether this is sustainable, if a radical overhaul is needed to reduce costs or how we grow the railway back again. Next on our agenda will be the plan to ban the sale of petrol and diesel cars by 2030, and how we can deliver the new infrastructure in time, and whether road pricing will have to replace falling fuel duty.

In a meeting with No10 advisors, I discussed local concerns about proposals to change planning and development rules. I made the case for the legislation forcing developers to build along the Link Road and to do that we need two things. Firstly, financial penalties when they don’t build (repeating the ideas on local authorities compulsory purchasing land at 80% and then building out; imposing council tax 12 months after planning consent is granted and not once the home is completed). Secondly, we need to decree that additional space, such as around Little Common, cannot be built on at all until the land allocated on the Link Road is developed.

Whilst I could undertake some of the above from home, it’s either not permitted or it’s not as effective. I am very careful about social distancing and my staff all work away from Westminster. Whilst I am now back in the constituency for the weekend, the weekday column remains ‘In the House’.

My neighbour in Hastings and Rye, Sally-Ann Hart, sent me the accompanying photo and reminded me that it had been a year to the day when it had been taken. We were out campaigning under clear blue skies in Hastings. At that point, she was a hopeful election candidate.