A week of highs and lows 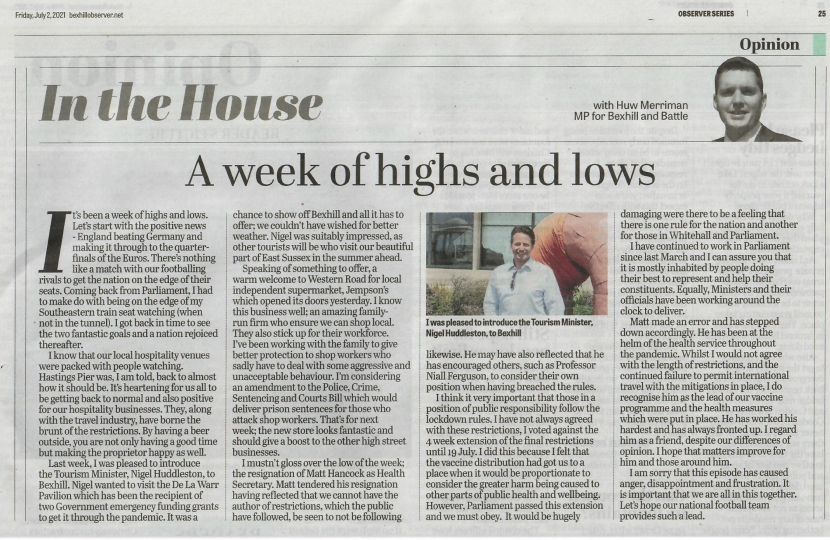 It’s been a week of highs and lows. Let’s start with the positive news - England beating Germany and making it through to the quarter-finals of the Euros. There’s nothing like a match with our footballing rivals to get the nation on the edge of their seats. Coming back from Parliament, I had to make do with being on the edge of my Southeastern train seat watching (when not in the tunnel). I got back in time to see the two fantastic goals and a nation rejoiced thereafter.

I know that our local hospitality venues were packed with people watching. Hastings Pier was, I am told, back to almost how it should be. It’s heartening for us all to be getting back to normal and also positive for our hospitality businesses. They, along with the travel industry, have borne the brunt of the restrictions. By having a beer outside, you are not only having a good time but making the proprietor happy as well.

Last week, I was pleased to introduce the Tourism Minister, Nigel Huddleston, to Bexhill. Nigel wanted to visit the De La Warr Pavilion which has been the recipient of two Government emergency funding grants to get it through the pandemic. It was a chance to show off Bexhill and all it has to offer; we couldn’t have wished for better weather. Nigel was suitably impressed, as other tourists will be who visit our beautiful part of East Sussex in the summer ahead.

Speaking of something to offer, a warm welcome to Western Road for local independent supermarket, Jempson’s which opened its doors yesterday. I know this business well; an amazing family-run firm who ensure we can shop local. They also stick up for their workforce. I’ve been working with the family to give better protection to shop workers who sadly have to deal with some aggressive and unacceptable behaviour. I’m considering an amendment to the Police, Crime, Sentencing and Courts Bill which would deliver prison sentences for those who attack shop workers. That’s for next week; the new store looks fantastic and should give a boost to the other high street businesses.

I mustn’t gloss over the low of the week; the resignation of Matt Hancock as Health Secretary. Matt tendered his resignation having reflected that we cannot have the author of restrictions, which the public have followed, be seen to not be following likewise. He may have also reflected that he has encouraged others, such as Professor Niall Ferguson, to consider their own position when having breached the rules.

I think it very important that those in a position of public responsibility follow the lockdown rules. I have not always agreed with these restrictions, I voted against the 4 week extension of the final restrictions until 19 July. I did this because I felt that the vaccine distribution had got us to a place when it would be proportionate to consider the greater harm being caused to other parts of public health and wellbeing. However, Parliament passed this extension and we must obey.  It would be hugely damaging were there to be a feeling that there is one rule for the nation and another for those in Whitehall and Parliament.

I have continued to work in Parliament since last March and I can assure you that it is mostly inhabited by people doing their best to represent and help their constituents. Equally, Ministers and their officials have been working around the clock to deliver.

Matt made an error and has stepped down accordingly. He has been at the helm of the health service throughout the pandemic. Whilst I would not agree with the length of restrictions, and the continued failure to permit international travel with the mitigations in place, I do recognise him as the lead of our vaccine programme and the health measures which were put in place. He has worked his hardest and has always fronted up. I regard him as a friend, despite our differences of opinion. I hope that matters improve for him and those around him.

I am sorry that this episode has caused anger, disappointment and frustration. It is important that we are all in this together. Let’s hope our national football team provides such a lead.