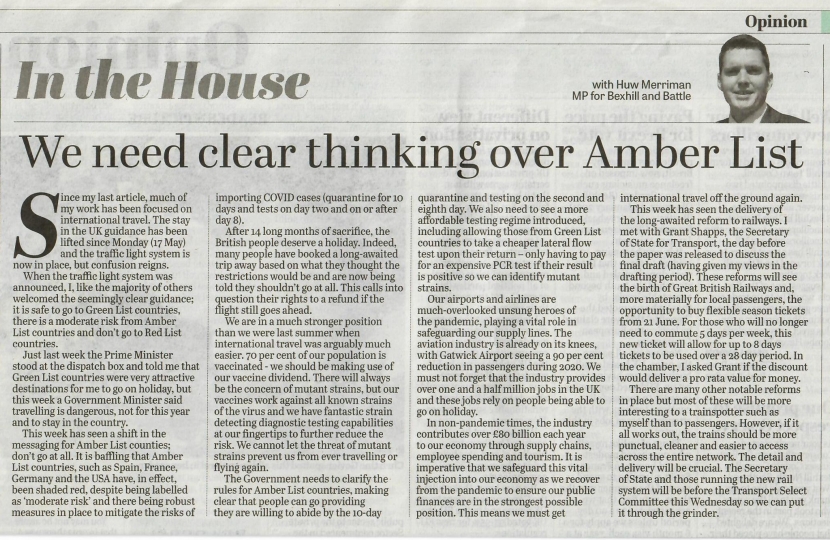 Since my last article, much of my work has been focused on international travel. The stay in the UK guidance has been lifted since Monday (17 May) and the traffic light system is now in place, but confusion reigns.

When the traffic light system was announced, I, like the majority of others welcomed the seemingly clear guidance; it is safe to go to Green List countries, there is a moderate risk from Amber List countries and don’t go to Red List countries.

Just last week the Prime Minister stood at the dispatch box and told me that Green List countries were very attractive destinations for me to go on holiday, but this week a Government Minister said travelling is dangerous, not for this year and to stay in the country.

This week has seen a shift in the messaging for Amber List counties; don’t go at all. It is baffling that Amber List countries, such as Spain, France, Germany and the USA have, in effect, been shaded red, despite being labelled as ‘moderate risk’ and there being robust measures in place to mitigate the risks of importing COVID cases (quarantine for 10 days and tests on day two and on or after day eight).

After 14 long months of sacrifice, the British people deserve a holiday. Indeed, many people have booked a long-awaited trip away based on what they thought the restrictions would be and are now being told they shouldn’t go at all. This calls into question their rights to a refund if the flight still goes ahead.

We are in a much stronger position than we were last summer when international travel was arguably much easier. 70 per cent of our population is vaccinated - we should be making use of our vaccine dividend. There will always be the concern of mutant strains, but our vaccines work against all known strains of the virus and we have fantastic strain detecting diagnostic testing capabilities at our fingertips to further reduce the risk. We cannot let the threat of mutant strains prevent us from ever travelling or flying again.

The Government needs to clarify the rules for Amber List countries, making clear that people can go providing they are willing to abide by the 10-day quarantine and testing on the second and eighth day. We also need to see a more affordable testing regime introduced, including allowing those from Green List countries to take a cheaper lateral flow test upon their return – only having to pay for an expensive PCR test if their result is positive so we can identify mutant strains.

Our airports and airlines are much-overlooked unsung heroes of the pandemic, playing a vital role in safeguarding our supply lines. The aviation industry is already on its knees, with Gatwick Airport seeing a 90 per cent reduction in passengers during 2020. We must not forget that the industry provides over one and a half million jobs in the UK and these jobs rely on people being able to go on holiday.

In non-pandemic times, the industry contributes over £80 billion each year to our economy through supply chains, employee spending and tourism. It is imperative that we safeguard this vital injection into our economy as we recover from the pandemic to ensure our public finances are in the strongest possible position. This means we must get international travel off the ground again.

This week has seen the delivery of the long-awaited reform to railways. I met with Grant Shapps, the Secretary of State for Transport, the day before the paper was released to discuss the final draft (having given my views in the drafting period). These reforms will see the birth of Great British Railways and, more materially for local passengers, the opportunity to buy flexible season tickets from 21 June. For those who will no longer need to commute 5 days per week, this new ticket will allow for up to 8 days tickets to be used over a 28 day period. In the chamber, I asked Grant if the discount would deliver a pro rata value for money.

There are many other notable reforms in place but most of these will be more interesting to a trainspotter such as myself than to passengers. However, if it all works out, the trains should be more punctual, cleaner and easier to access across the entire network. The detail and delivery will be crucial. The Secretary of State and those running the new rail system will be before the Transport Select Committee this Wednesday so we can put it through the grinder.