We lost a hard-working backbencher 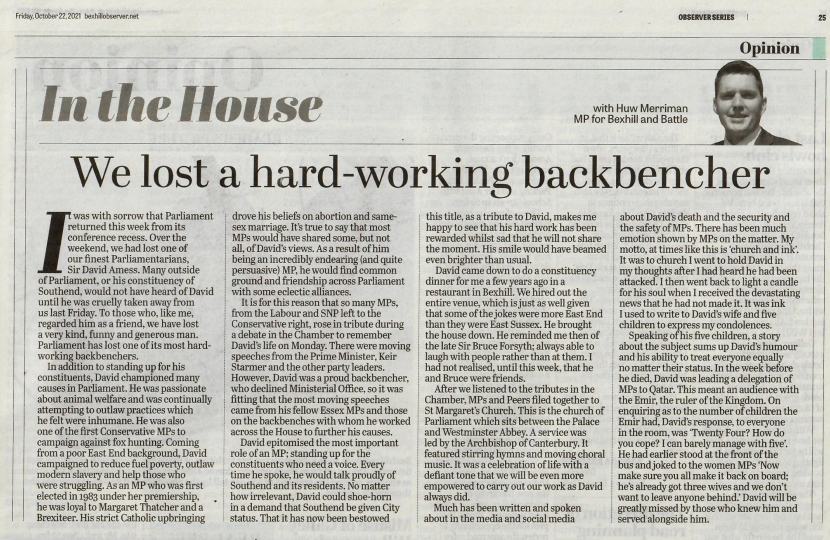 It was with sorrow that Parliament returned this week from its conference recess. Over the weekend, we had lost one of our finest Parliamentarians, Sir David Amess. Many outside of Parliament, or his constituency of Southend, would not have heard of David until he was cruelly taken away from us last Friday. To those who, like me, regarded him as a friend, we have lost a very kind, funny and generous man. Parliament has lost one of its most hard-working backbenchers.

In addition to standing up for his constituents, David championed many causes in Parliament. He was passionate about animal welfare and was continually attempting to outlaw practices which he felt were inhumane. He was also one of the first Conservative MPs to campaign against fox hunting. Coming from a poor East End background, David campaigned to reduce fuel poverty, outlaw modern slavery and help those who were struggling. As an MP who was first elected in 1983 under her premiership, he was loyal to Margaret Thatcher and a Brexiteer. His strict Catholic upbringing drove his beliefs on abortion and same-sex marriage. It’s true to say that most MPs would have shared some, but not all, of David’s views. As a result of him being an incredibly endearing (and quite persuasive) MP, he would find common ground and friendship across Parliament with some eclectic alliances.

It is for this reason that so many MPs, from the Labour and SNP left to the Conservative right, rose in tribute during a debate in the Chamber to remember David’s life on Monday. There were moving speeches from the Prime Minister, Keir Starmer and the other party leaders. However, David was a proud backbencher, who declined Ministerial Office, so it was fitting that the most moving speeches came from his fellow Essex MPs and those on the backbenches with whom he worked across the House to further his causes.

David epitomised the most important role of an MP; standing up for the constituents who need a voice. Every time he spoke, he would talk proudly of Southend and its residents. No matter how irrelevant, David could shoe-horn in a demand that Southend be given City status. That it has now been bestowed this title, as a tribute to David, makes me happy to see that his hard work has been rewarded whilst sad that he will not share the moment. His smile would have beamed even brighter than usual.

David came down to do a constituency dinner for me a few years ago in a restaurant in Bexhill. We hired out the entire venue, which is just as well given that some of the jokes were more East End than they were East Sussex. He brought the house down. He reminded me then of the late Sir Bruce Forsyth; always able to laugh with people rather than at them. I had not realised, until this week, that he and Bruce were friends.

After we listened to the tributes in the Chamber, MPs and Peers filed together to St Margaret’s Church. This is the church of Parliament which sits between the Palace and Westminster Abbey. A service was led by the Archbishop of Canterbury. It featured stirring hymns and moving choral music. It was a celebration of life with a defiant tone that we will be even more empowered to carry out our work as David always did.

Much has been written and spoken about in the media and social media about David’s death and the security and the safety of MPs. There has been much emotion shown by MPs on the matter. My motto, at times like this is ‘church and ink’. It was to church I went to hold David in my thoughts after I had heard he had been attacked. I then went back to light a candle for his soul when I received the devastating news that he had not made it. It was ink I used to write to David’s wife and five children to express my condolences.

Speaking of his five children, a story about the subject sums up David’s humour and his ability to treat everyone equally no matter their status. In the week before he died, David was leading a delegation of MPs to Qatar. This meant an audience with the Emir, the ruler of the Kingdom. On enquiring as to the number of children the Emir had, David’s response, to everyone in the room, was ‘Twenty Four? How do you cope? I can barely manage with five’. He had earlier stood at the front of the bus and joked to the women MPs ‘Now make sure you all make it back on board; he’s already got three wives and we don’t want to leave anyone behind.’ David will be greatly missed by those who knew him and served alongside him.