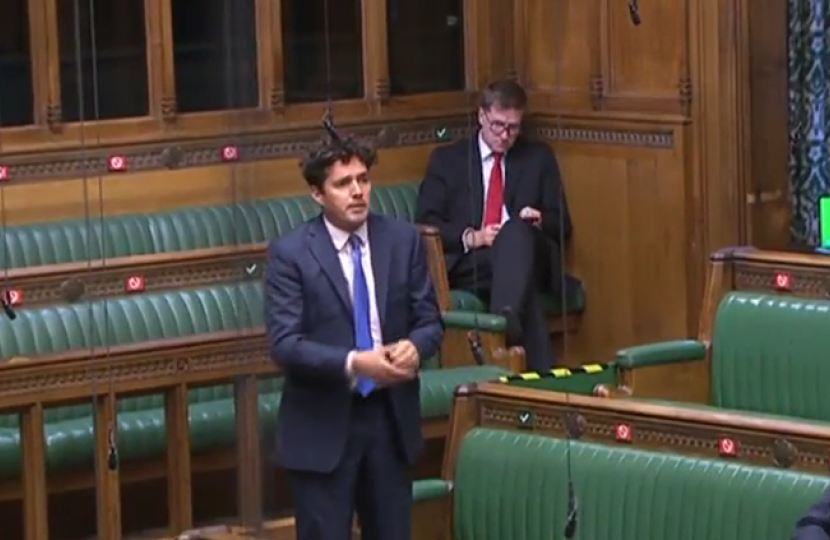 On Monday the Secretary of State for Transport announced a new islands policy. Islands will now be considered a different region from the mainland when it comes to deciding where to include on the exemptions list. I wanted to gain some clarification on testing, however, so I asked whether testing could be performed later allowing quarantine to be ended if the result was negative.

Watch his response below:

"I welcome the Secretary of State’s decision to look at islands separately from certain mainland territories. May I also ask him to give a little more detail on his thought processes with regards to testing? He is absolutely right that this has to be all about proportionality. On the one hand, there are many in this country who have forgone their holiday abroad, and it is right that they are not put at more risk of getting the virus than those who have gone abroad. Equally, there may well be the testing capability, not at day one, which we know does not work with any reliability, but perhaps a certain number ​of days afterwards, which could allow quarantine to be ended and the aviation industry to get much needed support. So on the scale of zero to 14 days, is he looking at about the day eight period for where there will be that proportionality on safety? Also, he mentioned that the House would know more in the coming weeks; may I push him to be a little more specific about when the House is likely to see a different approach come in?"

"I pay tribute to the Chair of the Select Committee for his boundless work during this crisis in following up on all manner of transport issues, and aviation issues in particular. He is absolutely right that testing in all its senses is a large part of the solution to everything related, or at least it is an aid to everything related, to coronavirus, and it is extremely important that we get it right. We know that there is pressure on the testing system. Schools are going back and entire classes and years require testing, and the same goes for universities—Dido spoke about this last week. It means we need to ensure that we are prioritising that. We also know that it can be helpful for returning holidaymakers and other travellers. Day zero does not work at the airport, but testing later can work. That capacity will be an issue for the reasons NHS Test and Trace mentioned, and I can reassure my hon. Friend that I will return to the House with proposals, which are currently being worked on with the industry, for something that is both practical and workable and that people can rely on as much as the NHS test and trace system itself."