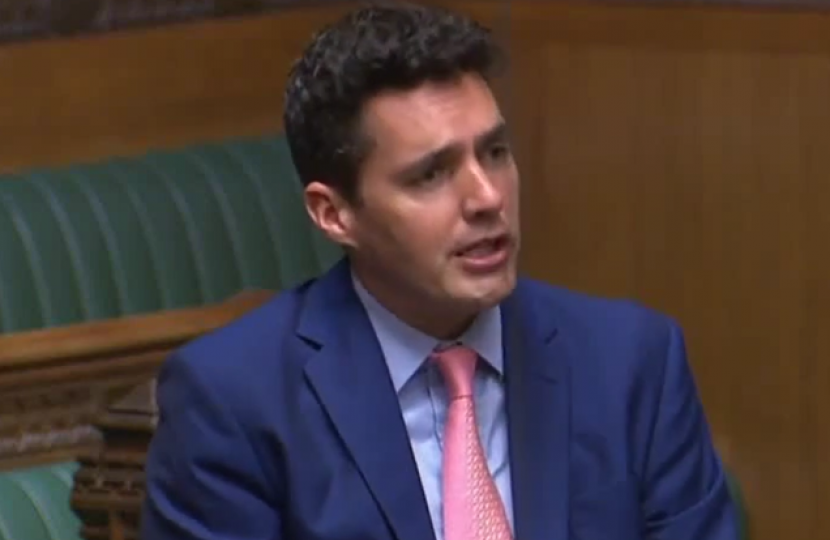 In my first speech as Chairman of the Transport Select Committee, I set out my main focuses which include hydrogen powered trains, automatic rail compensation, innovations to clean up the transport carbon footprint, and improving the bus services.

"I thank all the colleagues who supported me—or told me they did—in the election for the Transport Committee, which it is a great privilege to chair. I have not done much for diversity, because I think I am the first male to chair it. There is a serious issue with diversity in the transport sector, and I recognise that I am not exactly waving the flag for that. I also want to thank the hon. Member for Nottingham South (Lilian Greenwood), who chaired the Committee previously with such rigour. She was an incredibly popular Chair, and it is a delight to see her back on the Committee. She has promised not to be a backseat driver, but another formidable female politician once said the same thing in this place. I am happy to be driven from the back.

It is a delight to speak on such a wide-ranging motion tabled by the Opposition. I do not agree with many parts of it, but I welcome the fact that we are debating them, and none more so than the need to decarbonise our transport sector. We have had great success in reducing emissions by 40% since the 1990s. Pretty much every sector except transport has reduced emissions over the past few years. It has remained stubbornly difficult to reduce transport’s footprint. Surface transport accounts for 25% of all greenhouse gas emissions, and transport as a whole accounts for 33%. In fact, between 2014 and 2016, emissions from transport went up, so it is clearly the sector that needs the most focus, and I welcome the fact that it is getting that focus today.

I want to talk about some of the exciting innovations in the transport sector that we need to harness and encourage in order to meet our net zero carbon commitment."

"Is it not interesting that the Secretary of State is the only person in the debate so far to mention hydrogen, the true zero-emission product that can help us to achieve the goals set out by the Government?"

"I thank the hon. Gentleman for his intervention. In fact, I was just about to talk about hydrogen, so that is a brilliant segue.

The Transport Committee visited the engineer who first retrofitted a conventional train with hydrogen technology. We talk about the need to electrify and move away from diesel, but 2% of the national grid is taken up by electrified rail, and if only 40% of energy is coming from renewables, that means that 60% is still unpleasant. We need to invest in hydrogen, and it is very exciting that we have the engineer in this country who will enable us to do just that.

I will take one more intervention, as I am conscious that others wish to speak."

"I congratulate the hon. Member on his election. On hydrogen production for trains and transport in general, we need to think about how it is produced. ITM Power in Yorkshire produces its hydrogen using electrolysis, which actually means it is a zero carbon fuel. We need to take this in the round, because sometimes decarbonisation does not mean decarbonisation if the fuel still needs carbon and fossil fuels for its manufacture."

"The hon. Member is absolutely right. If we are to call it completely green technology, it needs to be as he describes. Perhaps we should have in mind a trip to Yorkshire.

I want to talk about the development of batteries in trains. On the Southern network, for example, there are still two diesel services, even though there is usually a third rail, because part of it does not have the third rail and the services therefore need diesel all the way through. The idea with batteries is that we charge and then use them for the part where there is no third rail. As I have mentioned, that incredibly exciting technology will allow us to move away from diesel.

I want to touch on parts of the motion that involve a more wide-ranging set of issues. There is the desire to cut rail and bus fares, and I absolutely agree that we should be looking to lessen increases in rail fares. It is very frustrating that we still use RPI rather than CPI to calculate rail fare increases; in the past year, fares would have gone up by 2.5% instead of 3.1%. The challenge is that a third of all the train operators’ costs go on employing staff, and if the staff continue to be paid on an RPI basis it will be very difficult to move that over.

I am excited by the ideas on fare reform that have been put forward mostly under the guise of the Williams review. It is absolutely ludicrous that those travelling to work for three days of the week, perhaps working from home during the rest of the week, are still unable to get a three-day-week ticket. That can make it too expensive for people to commute, so I would welcome such a reform.

I would dearly love to see automatic rail compensation. The train operators take the money they receive from Network Rail when there are delays, but two thirds of passengers who experience a delay do not claim compensation, so the rest is banked by the train operators. I would like them to have to ring-fence that money in a fund, and to invest in technology that allows us to tap on and tap off the train, so that if the train is delayed by more than 15 or 30 minutes, we would get compensation into our bank account without even needing to know that we had been delayed. We must get the train operators to deliver that technology, so that commuters and passengers feel that they are getting value for money, or at least that they are getting compensated when they have not had value for money.

I will not mention HS2, because I fear that will come up in many other debates, but I certainly envisage the Committee looking at it. However, I do want to talk about buses. Three out of five of all public transport journeys are undertaken by bus, yet it just does not receive the attention it should. I am looking at my hon. ​Friend the Member for Harrogate and Knaresborough (Andrew Jones), and he and I may be about to disagree, but when he was the Buses Minister, we had the Bus Services Act 2017. I really felt it should be a case of franchising for all authorities that wanted it, followed by partnerships and then followed by municipals in situations where partnerships and franchises did not work. I know the view was to stop further municipals, but if we now say to local authorities, “If developers aren’t building out, then you build council houses and compete with them”, why can we not do the same thing when the bus service disappears?

On the buses strategy, may we examine more closely whether deregulation is working? With train operators, the trains are paid for by the passengers who use them, so there is no subsidy as far as that is concerned, yet we tell the train operators when the trains stop and how often. However, when it comes to buses, which receive a £2 billion public sector subsidy, we do not impose the same conditions, so bus services may disappear, or get rerouted so that they no longer pass the GP’s surgery.

The buses strategy, which I absolutely welcome, needs to set out some teeth in terms of what bus service providers provide to our constituents. I say that very much looking at my new parliamentary party, with colleagues from parts of the north that we have not represented before, where the bus is even more of an essential service than in other parts we have previously reached. I very much hope that we will have the power, on the Conservative Benches, to ensure that bus services are properly restored. I also ask why young people cannot get to places of Saturday or part-time work because the bus service is too expensive or does not exist, yet we allow millionaire pensioners to receive free bus travel. It is essential that we ask these very searching questions.

We have talked about aviation; it is going to be incredibly difficult to green, but I disagree with the Liberal Democrats’ amendment that we should not proceed with Heathrow. We need to demonstrate that we can still build big.