Voting to Modernise Parliament as a Workplace 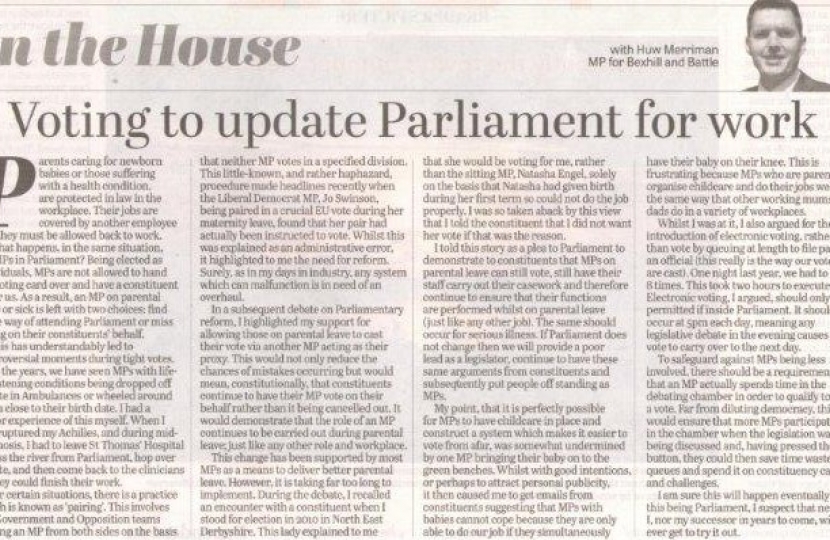 Parents caring for newborn babies or those suffering with a health condition, are protected in law in the workplace. Their jobs are covered by another employee and they must be allowed back to work. What happens, in the same situation, for MPs in Parliament? Being elected as individuals, MPs are not allowed to hand the voting card over and have a constituent cover us. As a result, an MP on parental leave or sick is left with two choices: find some way of attending Parliament or miss voting on their constituents’ behalf.

This has understandably led to controversial moments during tight votes. Over the years, we have seen MPs with life-threatening conditions being dropped off to vote in Ambulances or wheeled around when close to their birth date. I had a minor experience of this myself. When I had ruptured my Achilles, and during mid-diagnosis, I had to leave St Thomas’ Hospital across the river from Parliament, hop over to vote, and then come back to the clinicians so they could finish their work.

For certain situations, there is a practice which is known as ‘pairing’. This involves the Government and Opposition teams pairing an MP from both sides on the basis that neither MP votes in a specified division. This little-known, and rather haphazard, procedure made headlines recently when the Liberal Democrat MP, Jo Swinson, being paired in a crucial EU vote during her maternity leave, found that her pair had actually been instructed to vote. Whilst this was explained as an administrative error, it highlighted to me the need for reform. Surely, as in my days in industry, any system which can malfunction is in need of an overhaul.

In a subsequent debate on Parliamentary reform, I highlighted my support for allowing those on parental leave to cast their vote via another MP acting as their proxy. This would not only reduce the chances of mistakes occurring but would mean, constitutionally, that constituents continue to have their MP vote on their behalf rather than it being cancelled out. It would demonstrate that the role of an MP continues to be carried out during parental leave; just like any other role and workplace.

This change has been supported by most MPs as a means to deliver better parental leave. However, it is taking far too long to implement. During the debate, I recalled an encounter with a constituent when I stood for election in 2010 in North East Derbyshire. This lady explained to me that she would be voting for me, rather than the sitting MP, Natasha Engel, solely on the basis that Natasha had given birth during her first term so could not do the job properly. I was so taken aback by this view that I told the constituent that I did not want her vote if that was the reason.

I told this story as a plea to Parliament to demonstrate to constituents that MPs on parental leave can still vote, still have their staff carry out their casework and therefore continue to ensure that their functions are performed whilst on parental leave (just like any other job). The same should occur for serious illness. If Parliament does not change then we will provide a poor lead as a legislator, continue to have these same arguments from constituents and subsequently put people off standing as MPs.

My point, that it is perfectly possible for MPs to have childcare in place and construct a system which makes it easier to vote from afar, was somewhat undermined by one MP bringing their baby on to the green benches. Whilst with good intentions, or perhaps to attract personal publicity, it then caused me to get emails from constituents suggesting that MPs with babies cannot cope because they are only able to do our job if they simultaneously have their baby on their knee. This is frustrating because MPs who are parents organise childcare and do their jobs wells; in the same way that other working mums and dads do in a variety of workplaces.

Whilst I was at it, I also argued for the introduction of electronic voting, rather than vote by queuing at length to file past an official (this really is the way our votes are cast). One night last year, we had to vote 8 times. This took two hours to execute. Electronic voting, I argued, should only be permitted if inside Parliament. It should occur at 5pm each day, meaning any legislative debate in the evening causes a vote to carry over to the next day. To safeguard against MPs being less involved, there should be a requirement that an MP actually spends time in the debating chamber in order to qualify to cast a vote. Far from diluting democracy, this would ensure that more MPs participated in the chamber when the legislation was being discussed and, having pressed their button, they could then save time wasted in queues and spend it on constituency cases and challenges. I am sure this will happen eventually but, this being Parliament, I suspect that neither I, nor my successor in years to come, will ever get to try it out.