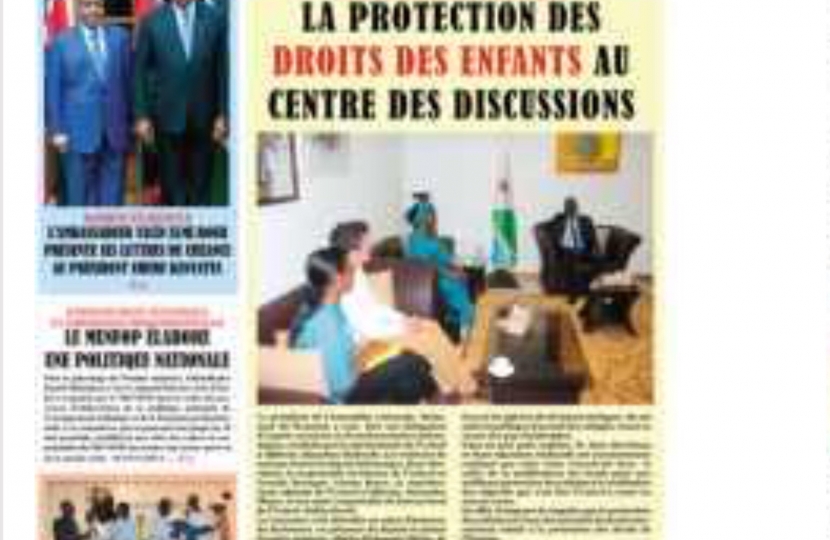 I joined the UNICEF team to visit the Parliament of Djibouti and be received by the assembly President, M. Mohamed Ali Houmed. Using our own comparison, this role is the equivalent of the Speaker of the House of Commons. In addition to meeting with the President, who only took his role in March of this year, we were joined by the former Prime Minister and now sitting MP and members of the Commission for Social Development. Our meeting ended up on the front page of the national daily newspaper.

The Djibouti National Assembly is made up of 65 MPs. I explained that our Parliament comprised of 650 MPs albeit we do have a population 60 times greater to represent. I further explained that we were looking to reduce the size by 50 MPs. The President did not believe that such an exercise would find much favour in the Djiboutoun assembly. I congratulated the President on the successful elections earlier this year and on the now record 25% proportion of women representatives. I explained that our mission in the UK was to have a 50/50 split.

The President told me about the Government plans to ramp up education provision and of the support from the top to ensure that residents are immunised from disease and are learning to prevent the spread of HIV. We discussed the challenges of the refugees who use Djibouti as a staging post to their migration. The President explained that he was keen to foster more relations with the British. Whereas the French, American, Chinese, Turkish, Saudi, Italian, German and Japanese all have either a military or embassy presence in the country, Britain does not.

We all agreed how vital it was for organisations such as UNICEF to bring their international experience to the country. I invited the President to bring some of his own MPs to London and assured him of a welcome in Parliament but to do so before the builders come in.