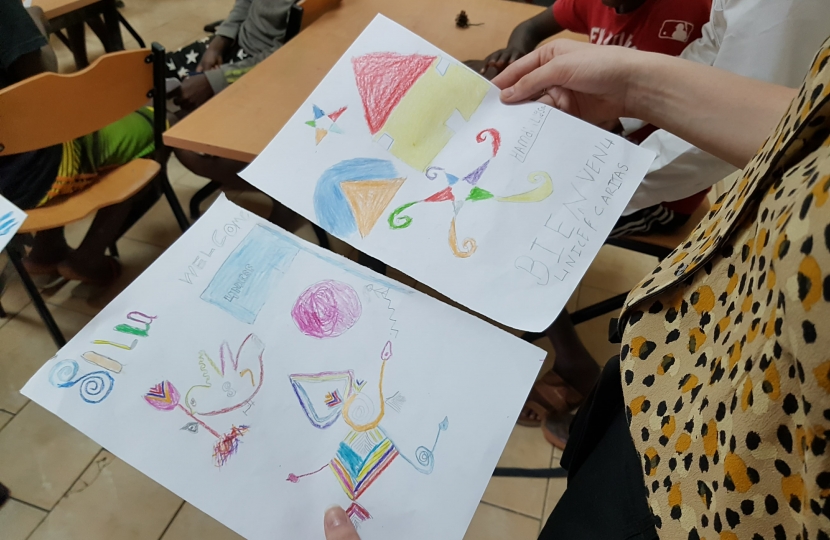 Today, we started off with a visit to the Caritas daytime drop-in centre in Djoubuti which plays host to a thousand vulnerable children. Many of these are child migrants and street children. The centre provides social service care to the children, including basic health and hygiene services, food, clothing and other essential items. UNICEF supports the catholic organisation which provides this care.

We meet Francesco and the team who are running the centre. I hear about the challenge of getting these poorest of young people away from the threat of drugs, violence and sex traffickers. The centre is not afraid to tackle this head-on but it cannot open at night and this is when the children are at their most vulnerable. Visiting early in the morning, we see the exhausted state of some children albeit many are outside playing football and basketball. The kitchen is busy with staff preparing pasta. Some children have drawn pictures, detailing their hopes for the future, and give these to us as a present. In the medical centre, I meet Heather, a fellow Britain, who is volunteering in the centre. Heather has a long queue of children to treat.

The Caritas centre is a lifeline for vulnerable young children. It is keeping them safe and fed and giving them a purpose. Without this centre, these children would have no support at all and would slip into a descent. The happy faces we met, in spite of the terrible challenges, were evidence enough that the work which UNICEF are doing for this centre is well received.

Later, we visited another centre which is running a life-skills programme for young children. The programme aims to empower young children to make the best decisions to support their physical and sexual health and boost their self-esteem. A group of young people were acting out the behaviours they were encouraging younger people to avoid and showing the perils of bad choices, which included a positive HIV test. They were also encouraging young people to take the advice available from health centres and from other positions of trust.

As these two projects readily demonstrated, Djibouti has unique challenges owing to its location at the crossroads linking Europe, Asia and Africa. It is increasingly becoming a transit country for movements across the Gulf of Arabia and Europe from Ethiopia and Somalia. From Yemen, refugees are making the opposite journey. They are fleeing from drought, conflict and a lack of opportunity. Many of the children at the centres have made the first part of this journey to Djibouti. Unaccompanied children represented 35% of last year’s migrant population. This influx has put a strain on the country’s already overstretched health, water, education, protection and social services.

These young people were full of confidence when meeting us. It was therefore tough to hear from the young people at the second centre that they could not themselves seek higher education or work opportunities due to the lack of availability. It must be difficult for young people to avoid a negative outcome if there are not enough options to motivate a better life. UNICEF, and its partners, are doing a great job supporting these projects. More attention is needed at a global level to ensure that Djibouti has the trade, infrastructure and investment to create opportunities for its young people.