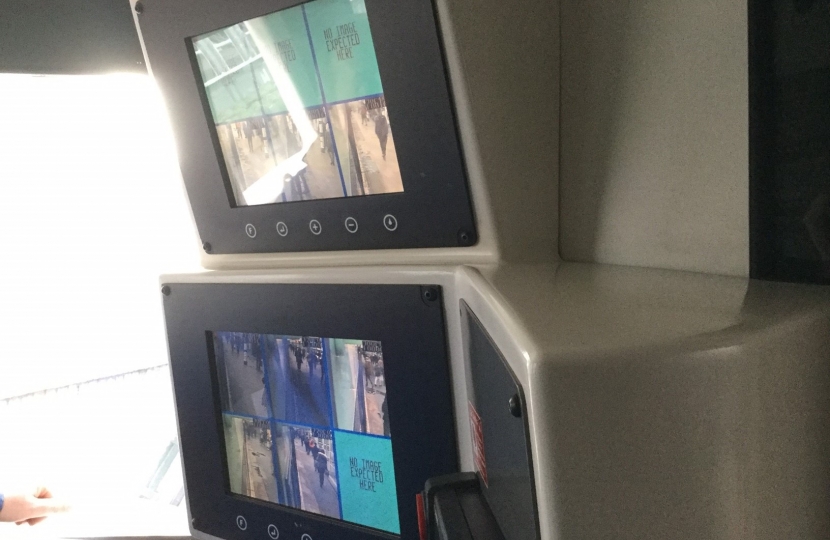 The Transport Select Committee today made a visit to Southern Rail to view the driver-only operated trains which have been at the centre of an industrial dispute between the train operator and train unions for almost a year.

This trip, which had originally been scheduled in November but had been postponed due to strike action, gave me, and my colleagues, the opportunity to meet the staff who are rolling these changes out, and operating it. The Select Committee have held numerous evidence sessions on this matter, hearing views from Southern's management, leaders of the two rail unions, the Rail Safety regulator and Government Ministers (amongst others). It was good to be able to view the matter with our own eyes and ask questions as we did so.

At Victoria Station, we were shown the cameras, which are placed on each carriage for the driver, and the monitors which the driver has in the train cab (one picture per carriage). These monitors were the older form. Southern is in the process of rolling out newer, and even clearer, monitors to its fleet. From what I viewed in the cab, it was perfectly possible for the driver to view when passengers were embarking or departing and when the platform was clear enough for the doors to be closed by the driver. On some busier stations, platform staff were giving the order to close the doors. At quieter stations, the driver was doing this job alone with his monitors.

The driver has an alarm system which indicates if something, or someone, has become stuck in the doors. It was notable that the monitors go blank as soon as the train is about to move out of the station. Recommendations had been made that it would be an enhancement on conductor operation were the monitors to show the doors and carriages for the entire time the train travelled along, and out of, the platform. It appears, due to concerns that drivers could be liable should they miss any occurrence, that this feature cannot yet be used for fear of repercussions. This is understandable albeit perhaps an example of how our litigious country can compromise positive safety enhancements.

Southern told us that they have rolled out this new form of driver-only operation to 75% of their fleet, having used it on 25% of their fleet for years. Members of the Committee asked Southern management about the numbers of second crew members who would be on board trains. These employees are now known as On-Board Supervisors ('OBS'). We were informed that approximately 225 OBS' were working on trains which did not require them to carry out door opening duties and freed them to spend more time with customers. A similar number were operating the fleet which still required the second crew member to control the doors. An extra 100 OBS have been recruited (one new such recruit being on our train today). It is for this reason that Southern's management maintain that there will more second crew members following these changes and more interaction with passengers.

Mention was made of when a train could be operated by a driver without a second member of crew on board. Southern seeks to do so in 'exceptional circumstances'. These circumstances were agreed between the train drivers' union executive and Southern's management. This default practice occurs on some other lines (driver-only operation is used on 30% of the UK's rail network and has been for decades). The train drivers narrowly refused to back this agreement hence the industrial dispute is not settled and more talks are required.

I asked about the needs of disabled passengers. I explained that one constituent had been unable to board a train because no second crew member was on board. Southern explained that any disabled passenger could arrange to be helped on or off a train and out of a station. This would be a provided by a pre-booked non-crew member of staff. Southern acknowledged that, if there is not a second crew member on board the train for 'exceptional circumstances', then it will run and the driver will be unable to help a disabled person on and off the train (assuming that no station staff have been pre-arranged). Southern justified this by stating that, prior to the rolling out of driver-only operated trains, every train without a second crew member the train would be cancelled. This causes a knock-on effect to the entire network and overcrowding at stations for all passengers. There was an acknowledgement that this meant, by no longer having to cancel a train for passengers, those who are disabled may not be able to board a train which runs in exceptional circumstances without a second crew member. This, in the view of Southern, was not a good enough reason to cancel it for all other passengers and cause delays to the rest of their network.

Having travelled to Surrey on driver-only operated trains, we then returned back to London on a train which required the second crew member to open and close the doors. Whilst this is deemed safe practice, it stuck me that both forms I viewed appear, on the face of it, safe. Undoubtedly, the practice which allows the driver to control the doors allows the second crew member to spend more time with the passengers and ensures that only one person controls the door and the movement of the train.

Having received the views from Southern Rail, and having viewed the train operation for ourselves, I will be joining the Transport Select Committee when we meet with the train drivers union, ASLEF, to get their views on the matter.

Whilst this was a Transport Select Committee visit, these views are my opinion and not those of the Committee or other members who attended