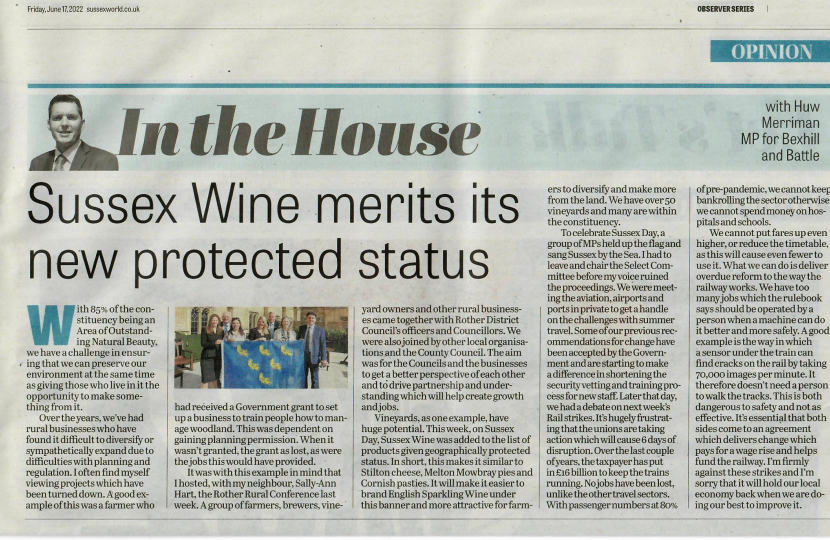 With 85% of the constituency being an Area of Outstanding Natural Beauty, we have a challenge in ensuring that we can preserve our environment at the same time as giving those who live in it the opportunity to make something from it. Over the years, we’ve had rural businesses who have found it difficult to diversify or sympathetically expand due to difficulties with planning and regulation. I often find myself viewing projects which have been turned down. A good example of this was a farmer who had received a Government grant to set up a business to train people how to manage woodland. This was dependent on gaining planning permission. When it wasn’t granted, the grant as lost, as were the jobs this would have provided.

It was with this example in mind that I hosted, with my neighbour, Sally-Ann Hart, the Rother Rural Conference last week. A group of farmers, brewers, vineyard owners and other rural businesses came together with Rother District Council’s officers and Councillors. We were also joined by other local organisations and the County Council. The aim was for the Councils and the businesses to get a better perspective of each other and to drive partnership and understanding which will help create growth and jobs.

Vineyards, as one example, have huge potential. This week, on Sussex Day, Sussex Wine was added to the list of products given geographically protected status. In short, this makes it similar to Stilton cheese, Melton Mowbray pies and Cornish pasties. It will make it easier to brand English Sparkling Wine under this banner and more attractive for farmers to diversify and make more from the land. We have over 50 vineyards and many are within the constituency.

To celebrate Sussex Day, a group of MPs held up the flag and sang Sussex by the Sea. I had to leave and chair the Select Committee before my voice ruined the proceedings. We were meeting the aviation, airports and ports in private to get a handle on the challenges with summer travel. Some of our previous recommendations for change have been accepted by the Government and are starting to make a difference in shortening the security vetting and training process for new staff. Later that day, we had a debate on next week’s Rail strikes. It’s hugely frustrating that the unions are taking action which will cause 6 days of disruption. Over the last couple of years, the taxpayer has put in £16 billion to keep the trains running. No jobs have been lost, unlike the other travel sectors. With passenger numbers at 80% of pre-pandemic, we cannot keep bankrolling the sector otherwise we cannot spend money on hospitals and schools.

We cannot put fares up even higher, or reduce the timetable, as this will cause even fewer to use it. What we can do is deliver overdue reform to the way the railway works. We have too many jobs which the rulebook says should be operated by a person when a machine can do it better and more safely. A good example is the way in which a sensor under the train can find cracks on the rail by taking 70,000 images per minute. It therefore doesn’t need a person to walk the tracks. This is both dangerous to personal safety and not as effective. It’s essential that both sides come to an agreement which delivers change which pays for a wage rise and helps fund the railway. I’m firmly against these strikes and I’m sorry that it will hold our local economy back when we are doing our best to improve it.