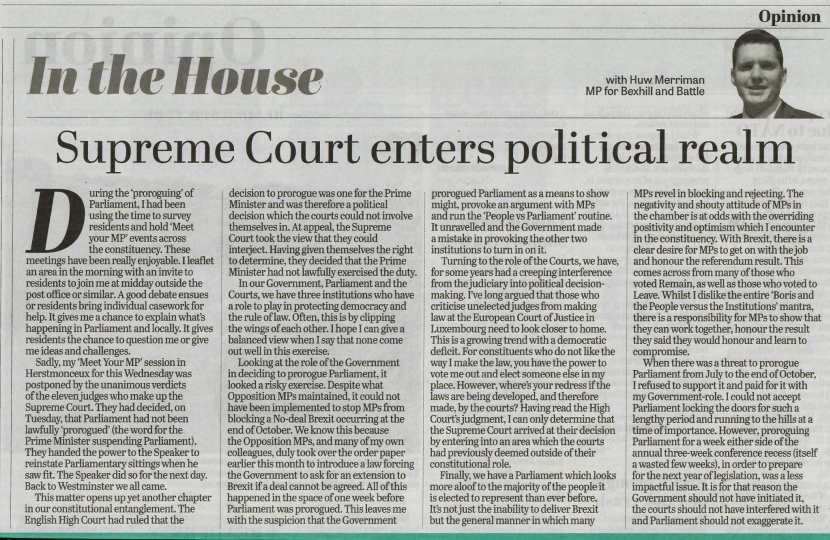 During the ‘proroguing’ of Parliament, I had been using the time to survey residents and hold ‘Meet your MP’ events across the constituency. These meetings have been really enjoyable. I leaflet an area in the morning with an invite to residents to join me at midday outside the post office or similar. A good debate ensues or residents bring individual casework for help. It gives me a chance to explain what’s happening in Parliament and locally. It gives residents the chance to question me or give me ideas and challenges.

Sadly, my ‘Meet Your MP’ session in Herstmonceux for this Wednesday was postponed by the unanimous verdicts of the eleven judges who make up the Supreme Court. They had decided, on Tuesday, that Parliament had not been lawfully ‘prorogued’ (the word for the Prime Minister suspending Parliament). They handed the power to the Speaker to reinstate Parliamentary sittings when he saw fit. The Speaker did so for the next day. Back to Westminster we all came.

This matter opens up yet another chapter in our constitutional entanglement. The English High Court had ruled that the decision to prorogue was one for the Prime Minister and was therefore a political decision which the courts could not involve themselves in. At appeal, the Supreme Court took the view that they could interject. Having given themselves the right to determine, they decided that the Prime Minister had not lawfully exercised the duty.

In our Government, Parliament and the Courts, we have three institutions who have a role to play in protecting democracy and the rule of law. Often, this is by clipping the wings of each other. I hope I can give a balanced view when I say that none come out well in this exercise.

Looking at the role of the Government in deciding to prorogue Parliament, it looked a risky exercise. Despite what Opposition MPs maintained, it could not have been implemented to stop MPs from blocking a No-deal Brexit occurring at the end of October. We know this because the Opposition MPs, and many of my own colleagues, duly took over the order paper earlier this month to introduce a law forcing the Government to ask for an extension to Brexit if a deal cannot be agreed. All of this happened in the space of one week before Parliament was prorogued. This leaves me with the suspicion that the Government prorogued Parliament as a means to show might, provoke an argument with MPs and run the ‘People vs Parliament’ routine. It unravelled and the Government made a mistake in provoking the other two institutions to turn in on it.

Turning to the role of the Courts, we have, for some years had a creeping interference from the judiciary into political decision-making. I’ve long argued that those who criticise unelected judges from making law at the European Court of Justice in Luxembourg need to look closer to home. This is a growing trend with a democratic deficit. For constituents who do not like the way I make the law, you have the power to vote me out and elect someone else in my place. However, where’s your redress if the laws are being developed, and therefore made, by the courts? Having read the High Court’s judgement, I can only determine that the Supreme Court arrived at their decision by entering into an area which the courts had previously deemed outside of their constitutional role.

Finally, we have a Parliament which looks more aloof to the majority of the people it is elected to represent than ever before. It’s not just the inability to deliver Brexit but the general manner in which many MPs revel in blocking and rejecting. The negativity and shouty attitude of MPs in the chamber is at odds with the overriding positivity and optimism which I encounter in the constituency. With Brexit, there is a clear desire for MPs to get on with the job and honour the referendum result. This comes across from many of those who voted Remain, as well as those who voted to Leave. Whilst I dislike the entire ‘Boris and the People versus the Institutions’ mantra, there is a responsibility for MPs to show that they can work together, honour the result they said they would honour and learn to compromise.

When there was a threat to prorogue Parliament from July to the end of October, I refused to support it and paid for it with my Government-role. I could not accept Parliament locking the doors for such a lengthy period and running to the hills at a time of importance. However, proroguing Parliament for a week either side of the annual three-week conference recess (itself a wasted few weeks), in order to prepare for the next year of legislation, was a less impactful issue. It is for that reason the Government should not have initiated it, the courts should not have interfered with it and Parliament should not exaggerate it.