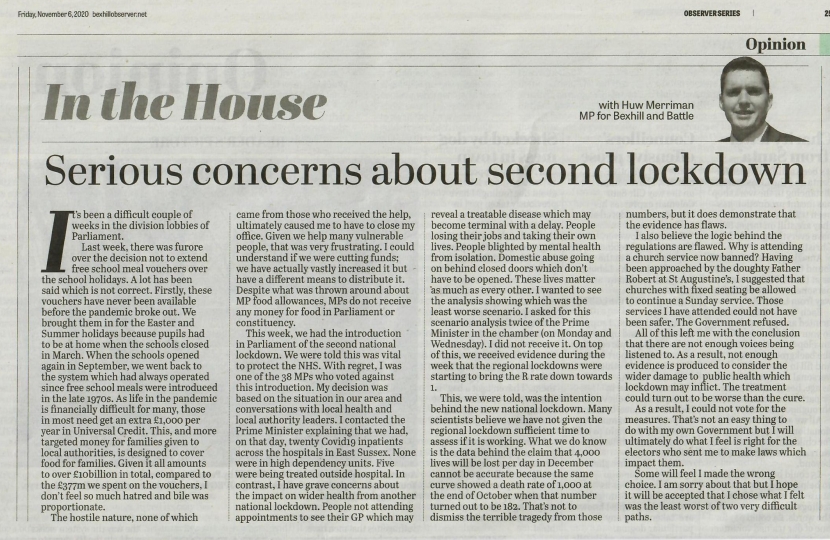 It’s been a difficult couple of weeks in the division lobbies of Parliament.

Last week, there was furore over the decision not to extend free school meal vouchers over the school holidays. A lot has been said which is not correct. Firstly, these vouchers have never been available before the pandemic broke out. We brought them in for the Easter and Summer holidays because pupils had to be at home when the schools closed in March. When the schools opened again in September, we went back to the system which had always operated since free school meals were introduced in the late 1970s. As life in the pandemic is financially difficult for many, those in most need get an extra £1,000 per year in Universal Credit. This, and more targeted money for families given to local authorities, is designed to cover food for families. Given it all amounts to over £10billion in total, compared to the £377m we spent on the vouchers, I don’t feel so much hatred and bile was proportionate.

The hostile nature, none of which came from those who received the help, ultimately caused me to have to close my office. Given we help many vulnerable people, that was very frustrating. I could understand if we were cutting funds; we have actually vastly increased it but have a different means to distribute it. Despite what was thrown around about MP food allowances, MPs do not receive any money for food in Parliament or constituency.

This week, we had the introduction in Parliament of the second national lockdown. We were told this was vital to protect the NHS. With regret, I was one of the 38 MPs who voted against this introduction. My decision was based on the situation in our area and conversations with local health and local authority leaders. I contacted the Prime Minister explaining that we had, on that day, twenty Covid19 inpatients across the hospitals in East Sussex. None were in high dependency units. Five were being treated outside hospital. In contrast, I have grave concerns about the impact on wider health from another national lockdown. People not attending appointments to see their GP which may reveal a treatable disease which may become terminal with a delay. People losing their jobs and taking their own lives. People blighted by mental health from isolation. Domestic abuse going on behind closed doors which don’t have to be opened. These lives matter as much as every other. I wanted to see the analysis showing which was the least worse scenario. I asked for this scenario analysis twice of the Prime Minister in the chamber (on Monday and Wednesday). I did not receive it. On top of this, we received evidence during the week that the regional lockdowns were starting to bring the R rate down towards 1. This, we were told, was the intention behind the new national lockdown. Many scientists believe we have not given the regional lockdown sufficient time to assess if it is working. What we do know is the data behind the claim that 4,000 lives will be lost per day in December cannot be accurate because the same curve showed a death rate of 1,000 at the end of October when that number turned out to be 182. That’s not to dismiss the terrible tragedy from those numbers, but it does demonstrate that the evidence has flaws.

I also believe the logic behind the regulations are flawed. Why is attending a church service now banned? Having been approached by the doughty Father Robert at St Augustine’s, I suggested that churches with fixed seating be allowed to continue a Sunday service. Those services I have attended could not have been safer. The Government refused.

All of this left me with the conclusion that there are not enough voices being listened to. As a result, not enough evidence is produced to consider the wider damage to  public health which lockdown may inflict. The treatment could turn out to be worse than the cure. As a result, I could not vote for the measures. That’s not an easy thing to do with my own Government but I will ultimately do what I feel is right for the electors who sent me to make laws which impact them. Some will feel I made the wrong choice. I am sorry about that but I hope it will be accepted that I chose what I felt was the least worst of two very difficult paths.