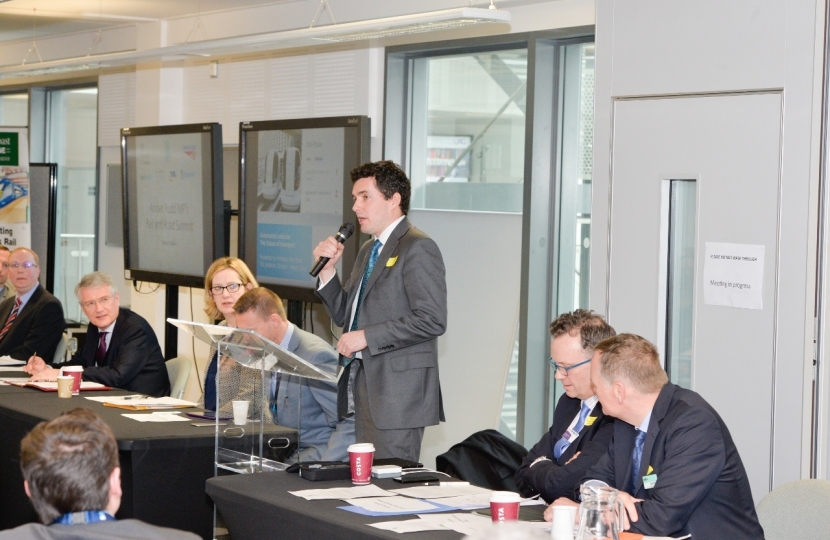 On Friday 18 March, Hastings and Rye MP Amber Rudd held her third annual transport summit which set out improvements that local residents can look forward to across both the local rail and local road networks.

The Summit’s keynote speaker, Roads Minister Andrew Jones MP, spoke about the Government’s ongoing delivery of a structured road investment program across the country and here in East Sussex. Initial analysis work is beginning to identify where improvement works are needed ahead of the delivery of the next Road Investment Strategy from 2020.

Prior to the Summit, the minister travelled with Amber from London along the Tonbridge to Pembury section of the A21 – which is currently seeing work to turn it into a dual carriageway – and the Kippings Cross to Lamberhurst stretch – which, it is hoped, will be the next part to be dualled.

Amber commented: “I’m pleased the minister was able to travel down the A21 with me and neighbouring MP Greg Clark on his way to this event in Hastings. We felt it was vital the Roads Minister witnessed first-hand the great need for additional investment in this route which could become a hugely beneficial link between our area and London.”

“The minister recognises the value of better transport infrastructure for our area and the fantastic opportunities it will bring. It was great to hear his confirmation that Highways England will assess parts of the A21 for additional dualling.”

Roads Minister Andrew Jones said: “People, businesses and the local economy in Hastings are already benefiting from the £50 million we have invested in the Combe Valley Way, while £70 million of improvements are underway on the A21 with the dualled Tonbridge to Pembury section due to open next year.

“Together with my visit to the southern section of the A21, where I saw for myself the issues that local residents face, the summit was a chance for me to hear how we can build on our achievements so far and ensure we are making journeys better for hardworking people across East Sussex.”

Paul Best, Senior Strategic Planner at Network Rail, set out the incremental steps which can be taken to deliver High Speed Rail from London to Rye, Hastings and Bexhill. He confirmed that a combination of station remodelling work at Ashford and the development of hybrid trains – which will be considered for investment for the first time by Network Rail as part of the forthcoming Kent Route Study – could deliver truly significant cuts in journey times between the local area and the capital.

Huw Merriman, MP for Bexhill and Battle, who is working with Amber in Westminster to secure transport investment for the area, updated attendees on the work they have both done to lobby government and industry.

He said: “Delivering our road and rail projects is vital if we are going to be able to attract new businesses and key workers to the area. Amber’s annual summits are a great opportunity for the community to deliver our vision of regeneration to attending Transport Ministers. I was delighted to speak about the case for High Speed Rail and to receive the backing from those in the audience to our campaign to get fast train services to Hastings and Bexhill.  As I said at the summit, we will have to argue a strong case but we stand the greatest chance of winning it if we all stand together.”

The Transport Research Laboratory (TRL) presented to the event on the evolution of driverless cars and brought a prototype of their cutting-edge GATEway development for attendees to see.

Amber added: “I would like to thank Professor Nick Reed and TRL for attending today to offer a fascinating vision into a future of safer, cleaner, more flexible and more efficient transport.”

Chairman of the Summit and Co Chairman of East Sussex Rail Alliance, Ray Chapman, underlined the importance of the meeting:  "Amber raised the tempo of this increasingly vital annual meeting by expanding into the very real needs of Hastings and East Sussex to focus on rail and road improvement and how we are to take on board the monumental effects on transportation on rail and road in the next quarter century.

“Professor Nick Reed gave us not only a glimpse into how driverless vehicles will transform road travel, but how much amazing research is being concentrated by TRL on making the systems safe and foolproof, delving into that tremendous leap-of-faith from driving your own vehicle into total reliance on an electronic system to do it all for you, and more.  The promise is the aiming to reduce accidents (3200 people are killed on the UK roads, each year - but none on rail), cut congestion, and to tackle the carbon footprint - while still getting you to your destination by electrical power.  This is revolutionary."

Govia Thameslink Railway (GTR), which runs the Southern franchise, and Southeastern presented on how both operators are working to improve on recent poor levels of service.

Amber said: “It was good to see both companies accepting their fair share of the blame for the difficulties passengers have experienced.”

“Faced with fully understandable criticism from local commuters, I’m pleased both have plans in place for immediate and longer-term service improvements and, vitally, to improve the provision of information to customers.”

Stagecoach set out the measures they have taken to improve local bus services, steps they are planning as well as identifying some the challenges they are looking to tackle.

Amber added: “I thought this was a very effective event in bringing all interested parties together to make everyone aware of where the challenges lie in our area’s transport links and where improvements should be made.

“I am grateful to all the speakers for attending and to Sussex Coast College for being fantastic hosts.

“All of us – MPs, local authorities, the LEP, business groups and campaigners – now need to work as hard as we possibly can to push for these projects which will have such a positive effect on our area’s continued regeneration.”