Returning to Parliament to Drive Down Insurance Costs 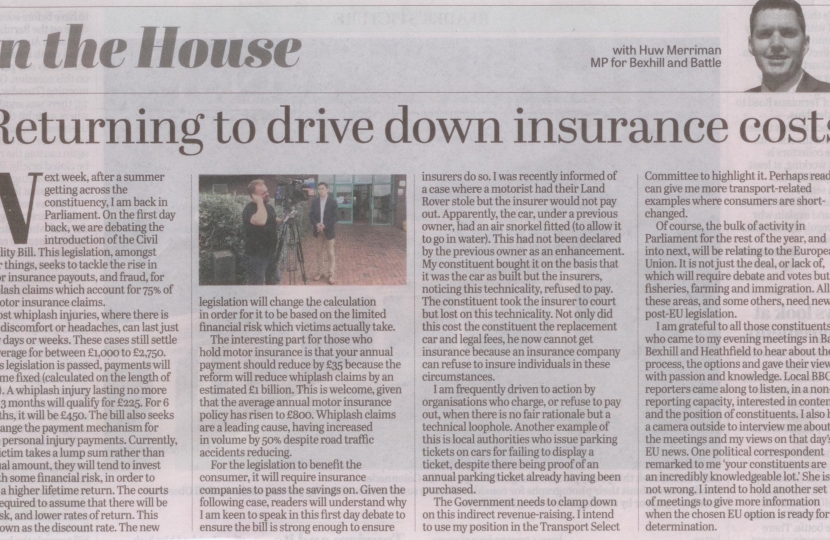 Next week, after a summer getting across the constituency, I am back in Parliament. On the first day back, we are debating the introduction of the Civil Liability Bill. This legislation, amongst other things, seeks to tackle the rise in motor insurance payouts, and fraud, for whiplash claims which account for 75% of all motor insurance claims.

Most whiplash injuries, where there is mild discomfort or headaches, can last just a few days or weeks. These cases still settle on average for between £1,000 to £2,750. If this legislation is passed, payments will become fixed (calculated on the length of time). A whiplash injury lasting no more than 3 months will qualify for £225. For 6 months, it will be £450. The bill also seeks to change the payment mechanism for large personal injury payments. Currently, if a victim takes a lump sum rather than annual amount, they will tend to invest it with some financial risk, in order to earn a higher lifetime return. The courts are required to assume that there will be no risk, and lower rates of return. This is known as the discount rate. The new legislation will change the calculation in order for it to be based on the limited financial risk which victims actually take.

The interesting part for those who hold motor insurance is that your annual payment should reduce by £35 because the reform will reduce whiplash claims by an estimated £1 billion. This is welcome, given that the average annual motor insurance policy has risen to £800. Whiplash claims are a leading cause, having increased in volume by 50% despite road traffic accidents reducing.

For the legislation to benefit the consumer, it will require insurance companies to pass the savings on. Given the following case, readers will understand why I am keen to speak in this first day debate to ensure the bill is strong enough to ensure insurers do so. I was recently informed of a case where a motorist had their Land Rover stole but the insurer would not pay out. Apparently, the car, under a previous owner, had an air snorkel fitted (to allow it to go in water). This had not been declared by the previous owner as an enhancement. My constituent bought it on the basis that it was the car as built but the insurers, noticing this technicality, refused to pay. The constituent took the insurer to court but lost on this technicality. Not only did this cost the constituent the replacement car and legal fees, he now cannot get insurance because an insurance company can refuse to insure individuals in these circumstances.

I am frequently driven to action by organisations who charge, or refuse to pay out, when there is no fair rationale but a technical loophole. Another example of this is local authorities who issue parking tickets on cars for failing to display a ticket, despite there being proof of an annual parking ticket already having been purchased.

The Government needs to clamp down on this indirect revenue-raising. I intend to use my position in the Transport Select Committee to highlight it. Perhaps readers can give me more transport-related examples where consumers are short-changed.

Of course, the bulk of activity in Parliament for the rest of the year, and into next, will be relating to the European Union. It is not just the deal, or lack of, which will require debate and votes but fisheries, farming and immigration. All of these areas, and some others, need new post-EU legislation.

grateful to all those constituents who came to my evening meetings in Battle, Bexhill and Heathfield to hear about the EU process, the options and gave their views with passion and knowledge. Local BBC reporters came along to listen, in a non-reporting capacity, interested in content and the position of constituents. I also had a camera outside to interview me about the meetings and my views on that day’s EU news. One political correspondent remarked to me ‘your constituents are an incredibly knowledgeable lot.’ She is not wrong. I intend to hold another set of meetings to give more information when the chosen EU option is ready for determination.