Restrictions must be proportional and justified 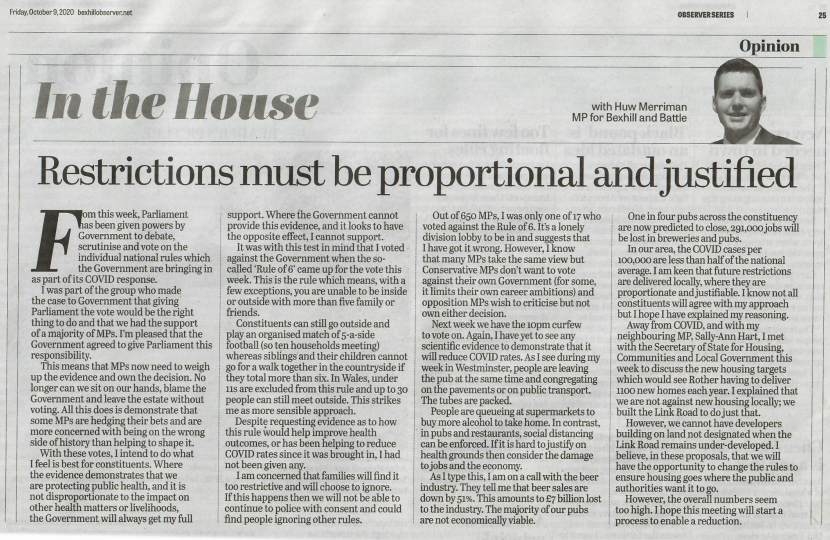 From this week, Parliament has been given powers by Government to debate, scrutinise and vote on the individual national rules which the Government are bringing in as part of its COVID response.

I was part of the group who made the case to Government that giving Parliament the vote would be the right thing to do and that we had the support of a majority of MPs. I’m pleased that the Government agreed to give Parliament this responsibility. This means that MPs now need to weigh up the evidence and own the decision. No longer can we sit on our hands, blame the Government and leave the estate without voting. All this does is demonstrate that some MPs are hedging their bets and are more concerned with being on the wrong side of history than helping to shape it.

With these votes, I intend to do what I feel is best for constituents. Where the evidence demonstrates that we are protecting public health, and it is not disproportionate to the impact on other health matters or livelihoods, the Government will always get my full support. Where the Government cannot provide this evidence, and it looks to have the opposite effect, I cannot support.

It was with this test in mind that I voted against the Government when the so-called ‘Rule of 6’ came up for the vote this week. This is the rule which means, with a few exceptions, you are unable to be inside or outside with more than five family or friends. Constituents can still go outside and play an organised match of 5-a-side football (so ten households meeting) whereas siblings and their children cannot go for a walk together in the countryside if they total more than six. In Wales, under 11s are excluded from this rule and up to 30 people can still meet outside. This strikes me as more sensible approach.

Despite requesting evidence as to how this rule would help improve health outcomes, or has been helping to reduce COVID rates since it was brought in, I had not been given any.  I am concerned that families will find it too restrictive and will choose to ignore. If this happens then we will not be able to continue to police with consent and could find people ignoring other rules.

Out of 650 MPs, I was only one of 17 who voted against the Rule of 6. It’s a lonely division lobby to be in and suggests that I have got it wrong. However, I know that many MPs take the same view but Conservative MPs don’t want to vote against their own Government (for some, it limits their own career ambitions) and opposition MPs wish to criticise but not own either decision.

Next week we have the 10pm curfew to vote on. Again, I have yet to see any scientific evidence to demonstrate that it will reduce COVID rates. As I see during my week in Westminster, people are leaving the pub at the same time and congregating on the pavements or on public transport. The tubes are packed. People are queueing at supermarkets to buy more alcohol to take home. In contrast, in pubs and restaurants, social distancing can be enforced. If it is hard to justify on health grounds then consider the damage to jobs and the economy. As I type this, I am on a call with the beer industry. They tell me that beer sales are down by 51%. This amounts to £7 billion lost to the industry. The majority of our pubs are not economically viable. One in four pubs across the constituency are now predicted to close, 291,000 jobs will be lost in breweries and pubs.

In our area, the COVID cases per 100,000 are less than half of the national average. I am keen that future restrictions are delivered locally, where they are proportionate and justifiable. I know not all constituents will agree with my approach but I hope I have explained my reasoning.

Away from COVID, and with my neighbouring MP, Sally-Ann Hart, I met with the Secretary of State for Housing, Communities and Local Government this week to discuss the new housing targets which would see Rother having to deliver 1100 new homes each year. I explained that we are not against new housing locally; we built the Link Road to do just that. However, we cannot have developers building on land not designated when the Link Road remains under-developed. I believe, in these proposals, that we will have the opportunity to change the rules to ensure housing goes where the public and authorities want it to go. However, the overall numbers seem too high. I hope this meeting will start a process to enable a reduction.