Rail Fares need to be reduced 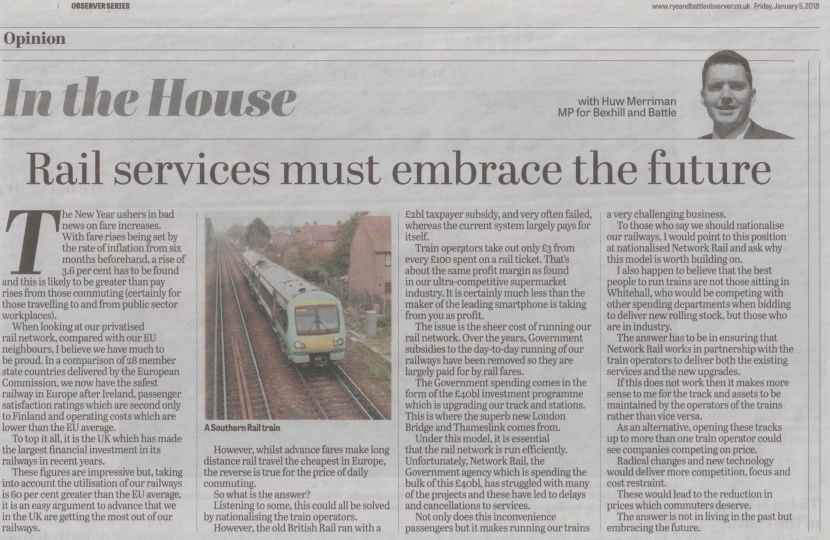 The New Year ushers in bad news on fare increases. With fare rises being set by the rate of inflation from six months beforehand, a rise of 3.6% has to be found and this is likely to be greater than pay rises from those commuting (certainly for those travelling to and from public sector workplaces).

When looking at our privatised rail network, compared with our EU neighbours, I believe we have much to be proud of. In a comparison of 28 member state countries delivered by the European Commission, we now have the safest railway in Europe after Ireland, passenger satisfaction ratings which are second only to Finland and operating costs which are lower than the EU average. To top it all, it is the UK which has made the largest financial investment in its railways in recent years.

These figures are impressive but, taking into account the utilisation of our railways is 60% greater than the EU average, it is an easy argument to advance that we in the UK are getting the most out of our railways. However, whilst advance fares make long distance rail travel the cheapest in Europe, the reverse is true for the price of daily commuting.

So what is the answer? Listening to some, this could all be solved by nationalising the train operators. However, the old British Rail ran with a £2bl taxpayer subsidy, and very often failed, whereas the current system largely pays for itself. Train operators take out only £3 from every £100 spent on a rail ticket. That's about the same profit margin as found in our ultra-competitive supermarket industry. It is certainly much less than the maker of the leading smartphone is taking from you as profit.

The issue is the sheer cost of running our rail network. Over the years, Government subsidies to the day-to-day running of our railways have been removed so they are largely paid for by rail fares. The Government spending comes in the form of the £40bl investment programme which is upgrading our track and stations. This is where the superb new London Bridge and Thameslink comes from.

Under this model, it is essential that the rail network is run efficiently. Unfortunately, Network Rail, the Government agency which is spending the bulk of this £40bl, has struggled with many of the projects and these have led to delays and cancellations to services. Not only does this inconvenience passengers but it makes running our trains a very challenging business. To those who say we should nationalise our railways, I would point to this position at nationalised Network Rail and ask why this model is worth building on. I also happen to believe that the best people to run trains are not those sitting in Whitehall, who would be competing with other spending departments when bidding to deliver new rolling stock, but those who are in industry. The answer has to be in ensuring that Network Rail works in partnership with the train operators to deliver both the existing services and the new upgrades. If this does not work then it makes more sense to me for the track and assets to be maintained by the operators of the trains rather than vice versa. As an alternative, opening these tracks up to more than one train operator could see companies competing on price.

Radical changes and new technology would deliver more competition, focus and cost restraint. These would lead to the reduction in prices which commuters deserve. The answer is not in living in the past but embracing the future.