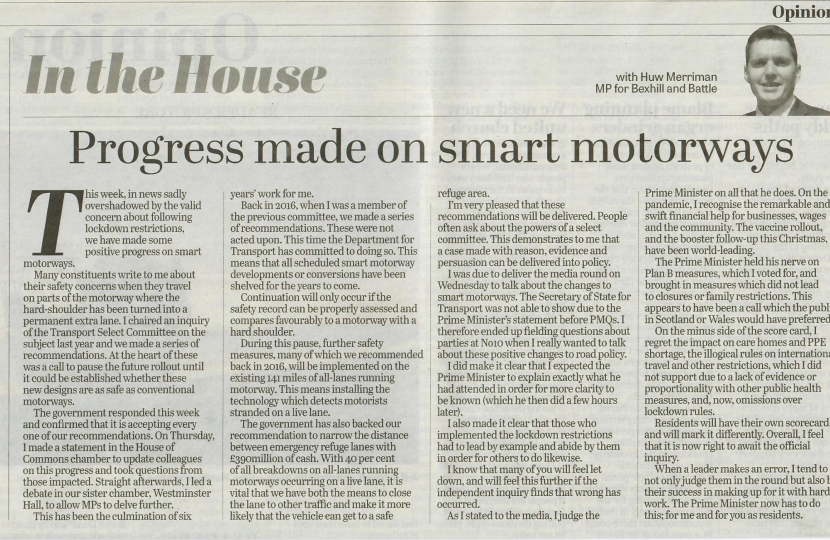 This week, in news sadly overshadowed by the valid concern about following lockdown restrictions, we have made some positive progress on Smart Motorways. Many constituents write to me about their safety concerns when they travel on parts of the motorway where the hard-shoulder has been turned into a permanent extra lane. I chaired an inquiry of the Transport Select Committee on the subject last year and we made a series of recommendations. At the heart of these was a call to pause the future roll-out until it could be established whether these new designs are as safe as conventional motorways.

The Government responded this week and confirmed that they are accepting every one of our recommendations. On Thursday, I made a statement in the House of Commons Chamber to update colleagues on this progress and took questions from those impacted. Straight afterwards, I led a debate in our sister chamber, Westminster Hall, to allow MPs to delve further.

This has been the culmination of 6 years work for me. Back in 2016, when I was a member of the previous committee, we made a series of recommendations. These were not acted upon. This time the Department for Transport have committed to doing so. This means that all scheduled Smart Motorway developments or conversions have been shelved for the years to come. Continuation will only occur if the safety record can be properly assessed and compares favourably to a motorway with a hard shoulder.

During this pause, further safety measures, many of which we recommended back in 2016, will be implemented on the existing 141 miles of all-lanes running motorway. This means installing the technology which detects motorists stranded on a live lane. The Government has also backed our recommendation to narrow the distance between emergency refuge lanes with £390 million of cash. With 40% of all breakdowns on all-lanes running motorways occurring on a live lane, it is vital that we have both the means to close the lane to other traffic and make it more likely that the vehicle can get to a safe refuge area. I’m very pleased that these recommendations will be delivered. People often ask about the powers of a select committee. This demonstrates to me that a case made with reason, evidence and persuasion can be delivered into policy.

I was due to deliver the media round on Wednesday to talk about the changes to Smart Motorways. The Secretary of State for Transport was not able to show due to the Prime Minister’s statement before PMQs. I therefore ended up fielding questions about parties at No10 when I really wanted to talk about these positive changes to road policy. I did make it clear that I expected the Prime Minister to explain exactly what he had attended in order for more clarity to be known (which he then did a few hours later). I also made it clear that those who implemented the lockdown restrictions had to lead by example and abide by them in order for others to do likewise.

I know that many of you will feel let down, and will feel this further if the independent inquiry finds that wrong has occurred. As I stated to the media, I judge the Prime Minister on all that he does. On the pandemic, I recognise the remarkable and swift financial help for businesses, wages and the community. The vaccine rollout, and the booster follow-up this Christmas, have been world-leading. The Prime Minister held his nerve on Plan B measures, which I voted for, and brought in measures which did not lead to closures or family restrictions. This appears to have been a call which the public in Scotland or Wales would have preferred. On the minus side of the score card, I regret the impact on care homes and PPE shortage, the illogical rules on international travel and other restrictions, which I did not support due to a lack of evidence or proportionality with other public health measures, and, now, omissions over lockdown rules. Residents will have their own score-card, and will mark it differently. Overall, I feel that it is now right to await the official inquiry. When a leader makes an error, I tend to not only judge them in the round but also by their success in making up for it with hard work. The Prime Minister now has to do this; for me and for you as residents.