Positivity, optimism and a bright future 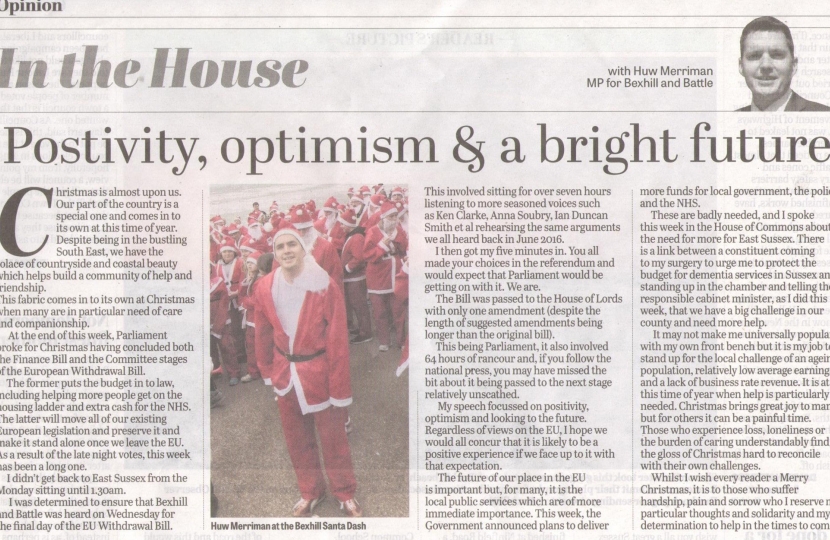 Christmas is almost upon us. Our part of the country is a special one and comes in to its own at this time of year. Despite being in the bustling South East, we have the solace of countryside and coastal beauty which helps build a community of help and friendship. This fabric comes in to its own at Christmas when many are in particular need of care and companionship.

At the end of this week, Parliament broke for Christmas having concluded both the Finance Bill and the Committee stages of the European Withdrawal Bill. The former puts the budget in to law, including helping more people get on the housing ladder and extra cash for the NHS. The latter will move all of our existing European legislation and preserve it and make it stand alone once we leave the EU. As a result of the late night votes, this week has been a long one. I didn't get back to East Sussex from the Monday sitting until 1.30am.

I was determined to ensure that Bexhill and Battle was heard on Wednesday for the final day of the EU Withdrawal Bill. This involved sitting for over seven hours listening to more seasoned voices such as Ken Clarke, Anna Soubry, Ian Duncan Smith et al rehearsing the same arguments we all heard back in June 2016. I then got my 5 minutes in. You all made your choices in the referendum and would expect that Parliament would be getting on with it. We are. The Bill was passed to the House of Lords with only one amendment (despite the length of suggested amendments being longer than the original bill). This being Parliament, it also involved 64 hours of rancour and, if you follow the national press, you may have missed the bit about it being passed to the next stage relatively unscathed. My speech focussed on positivity, optimism and looking to the future. Regardless of views on the EU, I hope we would all concur that it is likely to be a positive experience if we face up to it with that expectation.

The future of our place in the EU is important but, for many, it is the local public services which are of more immediate importance. This week, the Government announced plans to deliver more funds for local government, the police and the NHS. These are badly needed, and I spoke this week in the House of Commons about the need for more for East Sussex. There is a link between a constituent coming to my surgery to urge me to protect the budget for dementia services in Sussex and standing up in the chamber and telling the responsible cabinet minister, as I did this week, that we have a big challenge in our county and need more help.

It may not make me universally popular with my own front bench but it is my job to stand up for the local challenge of an ageing population, relatively low average earnings and a lack of business rate revenue. It is at this time of year when help is particularly needed. Christmas brings great joy to many but for others it can be a painful time. Those who experience loss, loneliness or the burden of caring understandably find the gloss of Christmas hard to reconcile with their own challenges. Whilst I wish every reader a Merry Christmas, it is to those who suffer hardship, pain and sorrow who I reserve my particular thoughts and solidarity and my determination to help in the times to come.