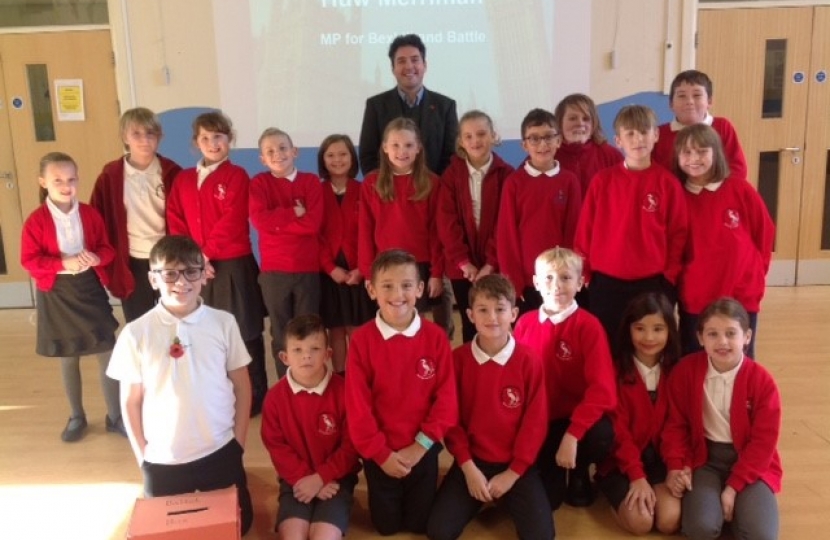 Local MP, Huw Merriman, was pleased to join pupils at Pevensey and Westham CE Primary School for a debate last Friday as they brought together the skills they had been learning during UK Parliament Week.

After presenting pupils with their achievement certificates in the Friday morning assembly, Huw chatted to Year 5 and 6 pupils about his job as MP for the Bexhill and Battle constituency and gave them examples of typical days in Westminster and the constituency. The pupils then had the chance to ask Huw a wide variety of questions which included what the government spends money on, where the money comes from, climate change, electric vehicles, voting age and international aid.  When the Q&A ended, Huw was invited to listen to the pupils take part in a debate on the subject of “Democracy is better than dictatorship” on which they all then voted.

Huw said “It is really great to be back out in the constituency and visiting local schools. I am so pleased that Pevensey and Westham school took part in UK Parliament Week this year. It is so important that they understand how they can make a difference. They had some really great questions for me and it was clear that the work they have been doing on debating skills had a positive impact on how they listened to arguments, agreed or challenged them, and then made up their own mind. I congratulate all the pupils who took part in the debate, had their opinions heard and listened so respectfully to others views. They were a real credit to the school.”

Deputy Headteacher and Year 5 teacher, Mrs Kerr, who organised Huw’s visit said “Pupils thoroughly enjoyed the visit. They were able to build upon their learning about parliament, debating and the role of an MP. A large number of pupils felt inspired by the visit and have since spoken about their new interest in politics and becoming an MP. It also enabled them to think about local issues they feel passionate about and how they can make a change by passing these on to their local MP.”