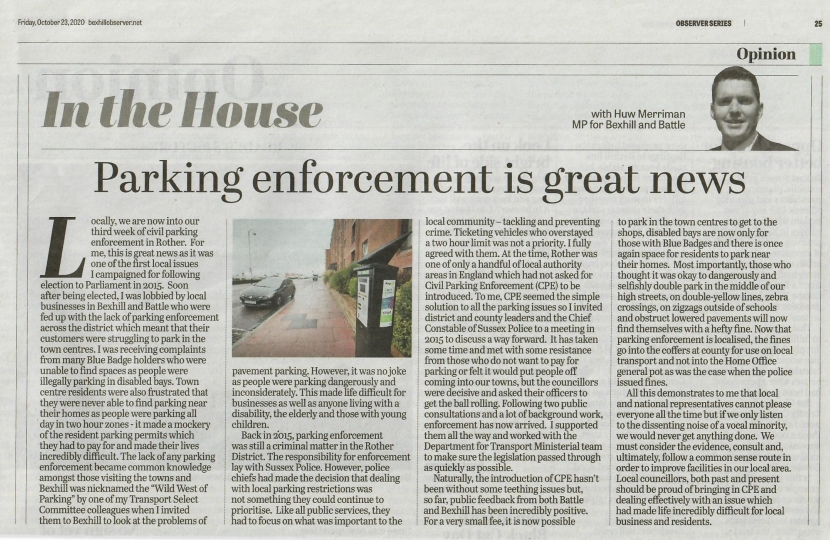 Locally, we are now into our third week of civil parking enforcement in Rother.  For me, this is great news as it was one of the first local issues I campaigned for following election to Parliament in 2015.  Soon after being elected, I was lobbied by local businesses in Bexhill and Battle who were fed up with the lack of parking enforcement across the district which meant that their customers were struggling to park in the town centres. I was receiving complaints from many Blue Badge holders who were unable to find spaces as people were illegally parking in disabled bays. Town centre residents were also frustrated that they were never able to find parking near their homes as people were parking all day in two hour zones - it made a mockery of the resident parking permits which they had to pay for and made their lives incredibly difficult. The lack of any parking enforcement became common knowledge amongst those visiting the towns and Bexhill was nicknamed the “Wild West of Parking” by one of my Transport Select Committee colleagues when I invited them to Bexhill to look at the problems of pavement parking. However, it was no joke as people were parking dangerously and inconsiderately. This made life difficult for businesses as well as anyone living with a disability, the elderly and those with young children.

Back in 2015, parking enforcement was still a criminal matter in the Rother District. The responsibility for enforcement lay with Sussex Police. However, police chiefs had made the decision that dealing with local parking restrictions was not something they could continue to prioritise.  Like all public services, they had to focus on what was important to the local community – tackling and preventing crime. Ticketing vehicles who overstayed a two hour limit was not a priority. I fully agreed with them. At the time, Rother was one of only a handful of local authority areas in England which had not asked for Civil Parking Enforcement (CPE) to be introduced. To me, CPE seemed the simple solution to all the parking issues so I invited district and county leaders and the Chief Constable of Sussex Police to a meeting in 2015 to discuss a way forward.  It has taken some time and met with some resistance from those who do not want to pay for parking or felt it would put people off coming into our towns, but the councillors were decisive and asked their officers to get the ball rolling. Following two public consultations and a lot of background work, enforcement has now arrived.  I supported them all the way and worked with the Department for Transport Ministerial team to make sure the legislation passed through as quickly as possible.

Naturally, the introduction of CPE hasn’t been without some teething issues but, so far, public feedback from both Battle and Bexhill has been incredibly positive. For a very small fee, it is now possible to park in the town centres to get to the shops, disabled bays are now only for those with Blue Badges and there is once again space for residents to park near their homes.  Most importantly, those who thought it was okay to dangerously and selfishly double park in the middle of our high streets, on double-yellow lines, zebra crossings, on zigzags outside of schools and obstruct lowered pavements will now find themselves with a hefty fine. Now that parking enforcement is localised, the fines go into the coffers at county for use on local transport and not into the Home Office general pot as was the case when the police issued fines.

All this demonstrates to me that local and national representatives cannot please everyone all the time but if we only listen to the dissenting noise of a vocal minority, we would never get anything done.  We must consider the evidence, consult and, ultimately, follow a common sense route in order to improve facilities in our local area. Local councillors, both past and present should be proud of bringing in CPE and dealing effectively with an issue which had made life incredibly difficult for local business and residents.