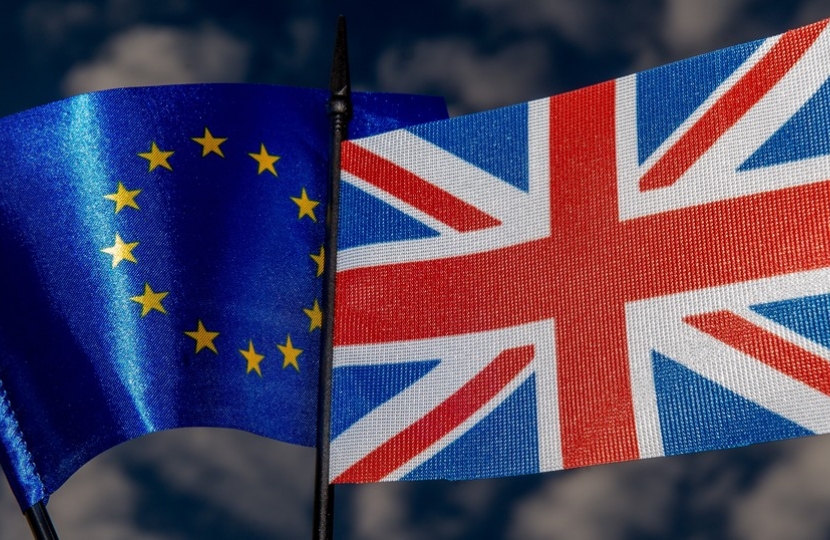 Hundreds of constituents have contacted me recently regarding the latest developments around the UK leaving the EU.

As you may expect, I have had many constituents who have lobbied me, either to support the latest agreement between the UK Government and the European Union or to vote against it. Some have asked for the legislation supporting this EU/UK agreement to be amended to include a Customs Union, Confirmatory Vote or other material changes. As I have done previously, I thought it best for transparency to have one detailed response which, I hope, covers the main points sent to me. If you had a specific inquiry which is not covered, and for which I have not previously addressed, do let me know.

I was pleased that the EU and UK have been able to renegotiate parts of the previous deal agreed by our former Prime Minister. Many thought that renegotiation would not lead to a revised agreement. I received a direct assurance from the Prime Minister that he was fixed on getting a deal. This reassurance was given to me on the day that Parliament voted to require the Prime Minister to seek an extension to leaving the EU on a No-deal basis in the event that a deal could not be agreed. On receiving this assurance from the Prime Minister, I put my trust in him to deliver. Some thought this was naive but he did deliver an agreement and put it to Parliament on the Saturday we sat.

I was ready to support a Meaningful Vote for the new agreement with the EU. However, this never got put to the vote because a majority of MPs passed an amendment to postpone a vote on the deal until legislation needed to turn the withdrawal agreement into UK law was completed.  It meant the Prime Minister had to ask the EU for another Brexit delay as it was unlikely that the new deal could be legislated on by Parliament in time to leave the EU by 31 October. This turned the much-hyped Saturday into a rather vacuous exercise.

On the Tuesday following the Saturday sitting, MPs were given an opportunity to vote in principle for the EU/UK deal via the Second Reading of the Withdrawal Agreement Bill. This is the legislative stage when MPs can signal their support for a bill but may then go on to table amendments to the bill as it proceeds. I voted in favour of the bill at this Second Reading. For the first impactful time, we saw a majority of MPs voting in favour of leaving the EU on agreed terms.

In order to conform with the scheduled departure date of 31 October, a timetable was put to MPs for the legislation to be passed. This was a shortened timetable but, having been through the agreement, I was happy to vote for the timetable. We have been debating every facet for over 3 years now. Much of the Withdrawal Agreement is identical to its predecessor deal. That which differed had been much discussed, particularly around the challenges with customs and the Irish border. As far as time taken to put in amendments, these have been much debated during the series of indicative votes which MPs were free to vote for earlier this year (and did so).

The timetable, or Programme Motion, was voted down by a majority of MPs and this led to the Prime Minister to announce that the bill would be paused whilst the EU decided what to do with the extension request which Parliament had ensured the Prime Minister would have to apply for (against his wishes). The EU have announced that they will grant this second extension until 31 January 2020. I regret the second extension. I voted against the extension of the end of March 2019 and, by voting against the legislation which forced the Government to extend again, I voted against the second extension. In my view, this continued uncertainty is no good for our economy or for our need to get on with other domestic challenges.

I remain committed to leaving the EU with a deal in place. I put my faith in the Prime Minister delivering a deal and, to his credit, he delivered one. The EU deserve some credit for coming back to the table as well. Clearly neither the UK Government or EU27 want a No-deal Brexit. Those MPs who keep voting against the Prime Minister’s proposals on the agreement or the timetable, and citing No-deal Brexit worries, need to consider that they are increasing the chances of leaving on No-deal terms by extending the uncertainty. The sure-fire way of avoiding a No-deal scenario is for MPs to vote for a deal and to do so without amendment or delay.

This week, there will be an attempt by the Conservatives, Liberal Democrats and Scottish National Party to move towards a General Election. The parties appear to disagree on the date or conditions but have pledged to call an election. This may occur before the Withdrawal Agreement Bill becomes law or afterwards. I would prefer that we get on with ratifying the EU/UK deal via the Withdrawal Agreement Bill. Given there have been free votes on various amendments already, and none received a majority, I would be surprised if there is a majority for material amendments which would see the Government having to ask for agreement from the EU or conclude that these amendments run contrary to our Brexit shape and positioning.

On the basis that the bill was passed in principle at the Second Reading on its existing terms, it stands to reason that the Bill should eventually pass if unamended. Immediately thereafter would be a better time to seek an election mandate for the next stage i.e. the future relationship and trade deal with the EU. That said, I am comfortable supporting an election beforehand. It’s quite clear that the Government cannot govern without a majority and this comes back to my desire to start delivering on the domestic agenda as well as concluding our departure from the EU.

‘Doing as the Government Whips demand’

I did not vote for Boris Johnson as Prime Minister. I left my Government role as he came in. I can therefore assure you that my views are my own. I make my opinions based on the evidence before me. Boris Johnson was accused of working to leave the EU without a deal in place. He got a deal in place.  My preference has always been to deliver the referendum result that sees the UK leave the EU but on agreed terms. The Prime Minister is treading this same path and for this he gets my support in the division lobby.

This process is challenging. I have received many differing views so I appreciate that this will not satisfy everyone. I would ask everyone to consider the opposing views of others, as well as their own. The Withdrawal Agreement Bill is a compromise but one which I feel offers a departure from the EU, as the referendum result requires, but on terms where we will continue to partner with our neighbours across the Channel.