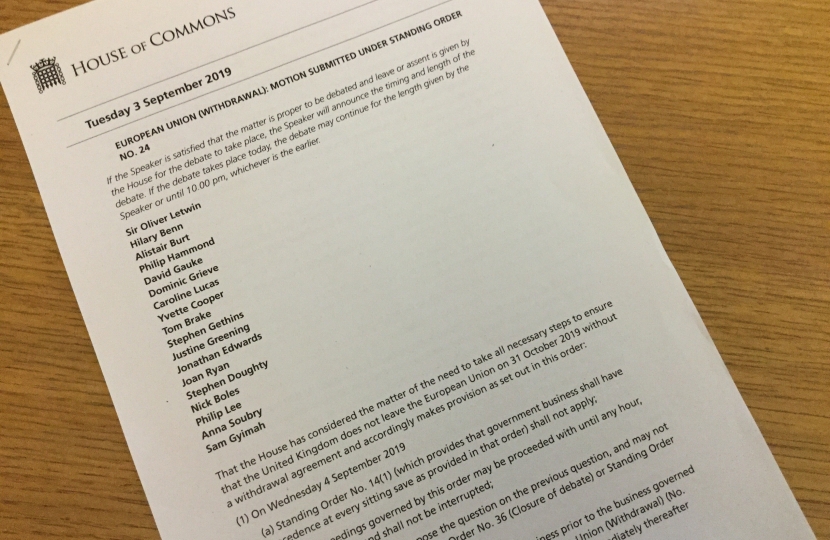 I’ve always supported delivering the referendum result and leaving on time on agreed terms with the EU. It is for this reason that I voted three times in Parliament for the Withdrawal Agreement (which would have taken us out of the EU by now), three times to keep No-Deal on the table (to give the strongest negotiating hand) and failed to vote with the Government to extend Article 50 at the end of May. Failing to leave is not only causing many to lose faith in democracy and political promises, it makes it harder to turn a new page and focus on the domestic reforms which we need locally (with particular reference to social care). It also causes economic stagnation and uncertainty.

However, it would be wrong, in my position, to ignore the economic forecasts on No-deal from the Office of Budget Responsibility. It has predicted that a No-deal Brexit would cause unemployment to rise to 5%, house prices to fall, Government borrowing to increase and the UK economy to go into recession. It’s no good dismissing the OBR’s view when this organisation was set up by the Conservative Government to mark its performance card. The Chancellor refers to OBR predictions when drawing up the annual Budget. When first elected, I listed jobs and housing as a priority. Anything which impacts the ability of people to earn a living and keep a roof over their head is contrary to what I came into politics to achieve.

To sum it up, my decision was based taking into account the democratic damage by not delivering the referendum, and the resultant economic uncertainty from a delay, versus the risk of economic damage by leaving without a deal. Some will take a contrary view and either maintain that there is damage to democracy by keeping No-deal on the table or damage to the economy by taking it off the table. We can all make our own individual arguments but, ultimately, I have to make my own determination. This is an invidious position for me and merely reinforces my dismay that MPs, across the House of Commons, failed to deliver Brexit on agreed terms earlier this year.

In order to satisfy myself that the Prime Minister has a deal as his Plan A option, and is not seeking to wind-down the clock on a sham exercise (as has been reported), I met with the Prime Minister after he had finished giving his statement in the Commons. This was a very positive meeting, held with a number of other MPs. We received an assurance, with details, as to the work to date, and process to come, on securing a deal. I asked the Prime Minister to reaffirm the view he gave in the chamber, and make it more widely known, that any Conservative MP who will not support his future deal would be given the same treatment of whip and candidacy withdrawal as that threatened to those seeking tonight to extend Article 50 in order to halt No-deal. Earlier, in the House of Commons, I had asked the Prime Minister to confirm that Conservative MPs who do not vote for the deal he brings back to Parliament would face the same consequences faced by those who vote against his Government today. The Prime Minister confirmed with ‘sauce for the goose is sauce for the gander’ (which means ‘Yes’).

Ultimately, I want to ensure that the Prime Minister has every tool available to get the deal he told me he is seeking. Whilst it may be unpalatable to some, I know from my own experience as a negotiator that you have to hold a card which makes the other side of the table take notice. To take that card away, and simultaneously tell the Prime Minister that he needs to get a deal with the EU and through Parliament, is setting him a high bar without giving him the means to jump over it. For this reason, and the assurances the Prime Minister was able to give, the Government will get my vote this evening. If the Government wins this vote, I expect the Prime Minister to do as he promised; ramp up the negotiations using this leverage and agree a deal.

I was not a supporter of the Prime Minister when he sought votes from MPs to become Prime Minister. This decision has therefore been based on what I believe to be right and not out of patronage.

There will be those who receive this communication who will not agree with me because I have not voted to take No-deal off the table. There are others who will not agree with me because they don’t want a deal at all and wish to leave on WTO terms (and therefore support my vote but not my concerns regarding a No-deal Brexit and the economy). Trying to reconcile two very opposing views is impossible.

To those who may enquire as to whether this decision was driven by threats by the Prime Minister to deselect me, this has not played a part. I made my decision based on what I felt was best for the UK and those I represent in the constituency. To those disappointed by this decision, I hope that the sincerity of it can be understood.