My visit with UNICEF to Africa 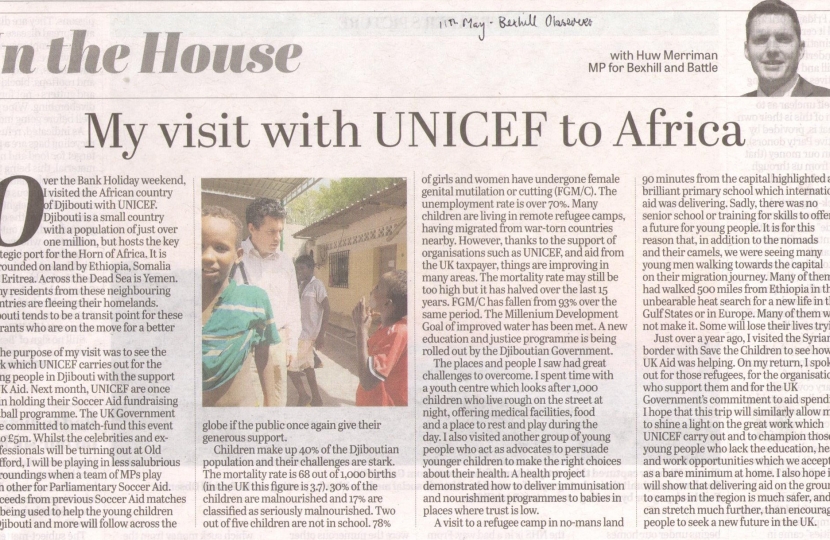 Over the Bank Holiday weekend, I visited the African country of Djibouti with UNICEF. Djibouti is a small country with a population of just over one million, but hosts the key strategic port for the Horn of Africa. It is surrounded on land by Ethiopia, Somalia and Eritrea. Across the Dead Sea is Yemen. Many residents from these neighbouring countries are fleeing their homelands. Djibouti tends to be a transit point for these migrants who are on the move for a better life.

The purpose of my visit was to see the work which UNICEF carries out for the young people in Djibouti with the support of UK Aid. Next month, UNICEF are once again holding their Soccer Aid fundraising football programme. The UK Government have committed to match-fund this event up to £5m. Whilst the celebrities and ex-professionals will be turning out at Old Trafford, I will be playing in less salubrious surroundings when a team of MPs play each other for Parliamentary Soccer Aid. Proceeds from previous Soccer Aid matches are being used to help the young children of Djibouti and more will follow across the globe if the public once again give their generous support.

Children make up 40% of the Djiboutian population and their challenges are stark. The mortality rate is 68 out of 1,000 births (in the UK this figure is 3.7). 30% of the children are malnourished and 17% are classified as seriously malnourished. Two out of five children are not in school. 78% of girls and women have undergone female genital mutilation or cutting (FGM/C). The unemployment rate is over 70%. Many children are living in remote refugee camps, having migrated from war-torn countries nearby. However, thanks to the support of organisations such as UNICEF, and aid from the UK taxpayer, things are improving in many areas. The mortality rate may still be too high but it has halved over the last 15 years. FGM/C has fallen from 93% over the same period. The Millenium Development Goal of improved water has been met. A new education and justice programme is being rolled out by the Djiboutian Government.

The places and people I saw had great challenges to overcome. I spent time with a youth centre which looks after 1,000 children who live rough on the street at night, offering medical facilities, food and a place to rest and play during the day. I also visited another group of young people who act as advocates to persuade younger children to make the right choices about their health. A health project demonstrated how to deliver immunisation and nourishment programmes to babies in places where trust is low.

A visit to a refugee camp in no-mans land 90 minutes from the capital highlighted a brilliant primary school which international aid was delivering. Sadly, there was no senior school or training for skills to offer a future for young people. It is for this reason that, in addition to the nomads and their camels, we were seeing many young men walking towards the capital on their migration journey. Many of them had walked 500 miles from Ethiopia in the unbearable heat search for a new life in the Gulf States or in Europe. Many of them will not make it. Some will lose their lives trying.

Just over a year ago, I visited the Syrian border with Save the Children to see how UK Aid was helping. On my return, I spoke out for those refugees, for the organisations who support them and for the UK Government’s commitment to aid spending. I hope that this trip will similarly allow me to shine a light on the great work which UNICEF carry out and to champion those young people who lack the education, health and work opportunities which we accept as a bare minimum at home. I also hope it will show that delivering aid on the ground to camps in the region is much safer, and can stretch much further, than encouraging people to seek a new future in the UK.