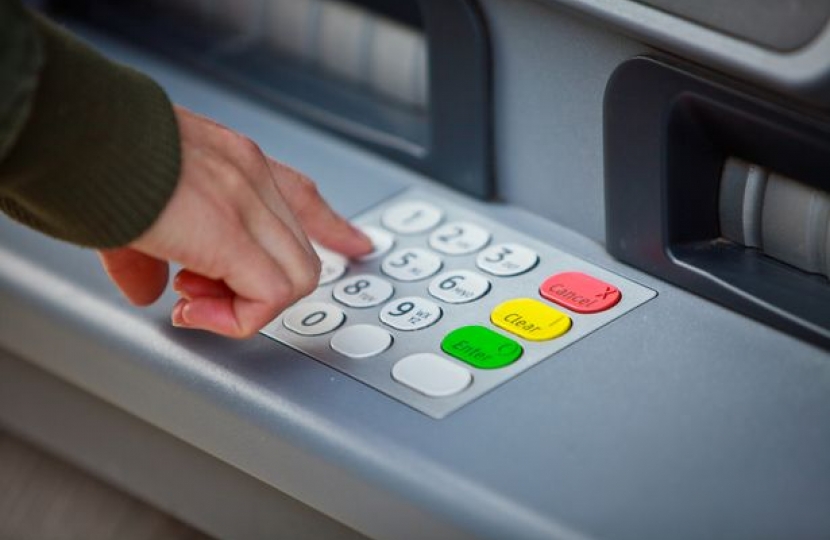 After the loss of the last 24-hour cash machine in Battle high street, Huw introduced a private members’ bill in Parliament to require banks to ensure that, when they close their branches, there remains a free and accessible cash machine in towns the size of Battle. This had cross-party support but did not have Parliamentary time to get passed. However, in response to this and to interest shown by the government in Huw’s initiative, LiNK, the industry body responsible for the cash machine network, introduced a programme of subsidised ATMs for communities backed by a further £4m of funding from banks and building societies. Battle is one of the first new sites to get an ATM under this scheme.

“The loss of cash machines in Battle was bad for local residents and visitors as well as shops and restaurants.  Residents, particularly those who are not comfortable using cards or who use cash to help budgeting were particularly hard hit – they are the ‘left behind’ in the cashless society. High Street shops everywhere face challenges and Battle is no exception. If just a few customers a day can spend a little more because they can get cash, that can be the difference which allows a business to stay open.

In Battle a great cross-community effort involving local and district councillors, Chamber of Commerce and local activist, Paul Redstone, has led to this success.  I am grateful to LiNK and the Costa franchise for their support in getting a cashpoint back on the high street of Battle.  I should like to thank Paul Redstone for his tireless work in bringing a cash machine back into the town.”

“I am delighted at the support shown by our local MP, organisations, councils and individuals across the local community in making this happen. Particular thanks are due to the Costa franchise for their generosity in providing a site and to LiNK for the subsidy which makes this viable. We’ve worked hard to get here, identifying sites, working with site owners, hosting visits by Link, getting commercial agreement and helping to ensure communication between everyone.”