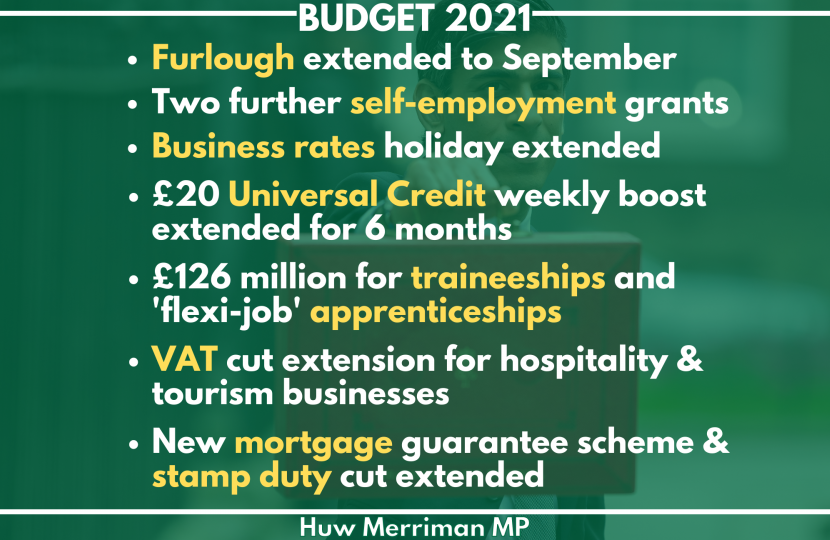 Bexhill and Battle MP, Huw Merriman, has welcomed the Spring Budget which delivers robust support for jobs, businesses and families, and provides a pathway economic recovery following the unprecedented financial strains of the COVID-19 pandemic.

Among a raft of measures announced by the Chancellor, it was confirmed that the  furlough scheme, which has supported almost 1.3 million jobs in the South East, will be extended until September, whilst the self-employed will be entitled to additional grants, with expanded eligibility criteria allowing people who became self-employed last year to claim. The temporary £20 weekly Universal Credit uplift has also been extended for a further six months, and a rise in the National Living Wage to £8.91 will help the lowest paid workers.

To support non-essential retail businesses reopen once restrictions are eased, the Government will provide grants of up to £6,000, while hospitality and leisure businesses will be able to claim grants of up to £18,000 and continue to benefit from an 100% reduction in business rates until June. Local Authorities will also be provided with a total of £435 billion to make discretionary payments to businesses who fall out of the scope of existing support mechanisms.

In a further move to boost the tourism and hospitality sector, the Chancellor has extended the 5 per cent reduced rate of VAT for a further six months until the end of September. The rate will then increase to 12.5 per cent from October until the end of March, before returning to the normal 20 per cent rate from April 1.

The Chancellor also revealed his plans to help young people get on the housing ladder. On top of the extension of the stamp duty cut until 30th June, the Government will guarantee the full value of mortgages to lenders that commit to providing loan-to-value ratios of between 91 to 95 per cent. This will make it easier for people to meet the cost of a deposit.

“I welcome the measures announced by the Chancellor; this delivers much needed support and reassurance for families and local businesses across East Sussex as we begin to emerge from lockdown.

“The Government has rightly provided unprecedented assistance since the beginning of the pandemic and has a clear plan to reinvigorate and rebuild the economy, but the Chancellor is also correct to be honest with the British people about the immense and severe impact of the pandemic on our public finances.

“The pandemic has seen a Government fiscal injection of £407 billion and our public debt now stands at £2 trillion – equivalent to £30,000 for every man, woman and child. So, with regret, I also understand the Chancellor’s decision to freeze personal allowances for five years and increase corporation tax on the largest corporations to 25% from 2023. As more of us get our vaccination, and more restrictions are lifted, it’s essential that we shop, eat and visit locally to help our community’s economy to recover.”