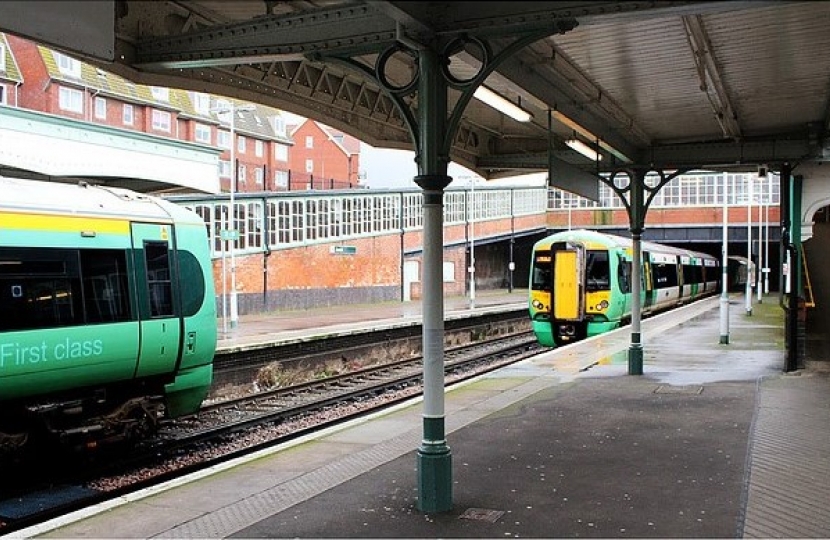 Local MPs, Amber Rudd and Huw Merriman, have welcomed the successful local campaign to provide a new Southern Railway timetable. The changes will see an increase in the number of train services between Hastings and Eastbourne via Bexhill, a faster service to London St Pancras and improved journey times between Hastings and Brighton.

When the direct rail link to Ashford appeared to be under threat, as part of the Southern timetable consultation, local rail user groups used their knowledge and technical expertise to put forward a proposal to the MPs that not only protected the service but added an extra service between Eastbourne and Hastings. The MPs, representing their constituents in Hastings and Rye and Bexhill and Battle, took up the ideas of the rail user groups’ proposals with Network Rail, GTR and the Department of Transport during a series of meetings and negotiations held inside and outside Parliament.

Huw said “It is fantastic news for local residents that the rail services between Hastings and Eastbourne will increase to four per hour. This builds far more resilience into the rail network that links our towns and connect us to London, Ashford International, Brighton and beyond. It will also alleviate pressure on the over-crowded fast service to Ashford. I want to place on record my congratulations to our local rail user groups and especially the Bexhill Rail Action Group (BRAG) who put forward the innovative proposals to increase the number of services between Hastings and Eastbourne. Residents of Normans Bay will also be pleased to see additional services in the new timetable and, for the first time, a Sunday service.

“GTR has demonstrated that this was a genuine consultation, they listened to their passengers and stakeholders and have achieved real improvements for our East Coastway rail service. This consultation exercise has been a brilliant example of local and national organisations and elected representatives working together for the benefit of local residents and business.”

Amber Rudd said “It is great that Southern Railway’s new timetable changes will increase train services between Hastings and Eastbourne. This is a key step towards addressing the capacity issue commuters have been experiencing as well as allowing commuters to travel direct to Ashford without having to change at Hastings. This is a fantastic achievement for our local rail user groups and I am pleased that GTR have incorporated our residents’ feedback into the timetable changes. Achieving high speed journeys has always been a priority of mine and I will continue to support and hold discussions with our local stakeholders and national bodies to ensure that we deliver the best possible rail services for our residents.”