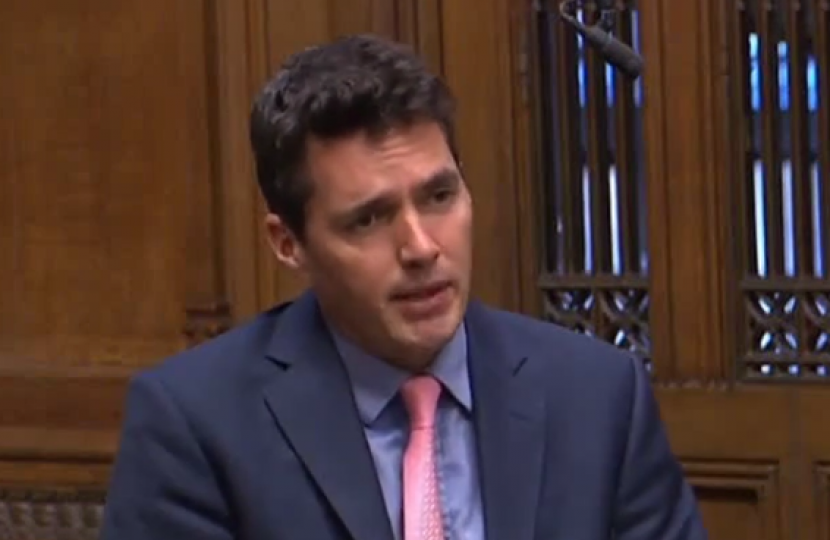 Huw Merriman, MP for Bexhill and Battle, was recognised as a school funding champion by the Chancellor of the Exchequer during his Spending Round Statement in Parliament today.

The MP has worked closely with headteachers in his constituency since changes to the national schools funding formula in 2017 resulted in some local schools being worse off. He has determinedly lobbied Education Ministers in meetings, by letter and in the House of Commons Chamber for fair funding, including using Prime Minister’s Questions to ask for more money for schools, teachers’ pay and special educational needs.

Speaking in the House of Commons following the announcement, the MP said to the Chancellor, “Can I thank the Chancellor for the school spending increases. The increases in £5000 (per pupil) for secondary and £4000 (per pupil) for primary will help East Sussex schools lift and almost catch up with some of the more wealthy parts of the country. Can I thank my teachers, headteachers and governors who have fought their campaign with me with respect, reason and with absolute passion to deliver the best for their school children.”

Huw also welcomed the news of additional funding for further education, special educational needs and early years which he has been lobbying for on behalf of local parents, nurseries and 6th forms.

Speaking afterwards, Huw said “I am absolutely passionate about education, from pre-school to 6th form, and I want to ensure that every child in my Bexhill and Battle constituency gets the same education funding and opportunities as pupils in schools across the country.  This has not been the case since I was elected to Parliament in 2015 so I have consistently lobbied the government for better and fairer education funding. I welcome today’s Spending Round Statement by the Chancellor of the Exchequer which has delivered some really good news for nurseries, schools and colleges in my constituency.  I am particularly pleased that the government will prioritise increases for the lowest funded schools first.

“Headteachers have told me how hard it has been for them to plan for ahead for each school year so I am pleased to hear that school funding will now move from one year to three year settlements. It also means teachers starting salaries can rise to £30k and pay rises can be properly funded without impacting other educational provision.

“In addition, parents and headteachers have highlighted to me the problems they face in supporting children with special educational needs. The Spending Review delivers over £700m more to support special needs education. This is essential to ensure that every child has access to the resources and help they need and deserve.

“Finally, I have visited a lot of nurseries and pre-schools in my constituency and I know of the problems they face in providing the 15 and 30 hour free hours that the government expects them to deliver based on the current funding levels. This has even caused some local nurseries to close resulting in job cuts and lack of parental choice.  I am therefore pleased to see the commitment to an early years spending increase by £66 million to lift the funding rates.”